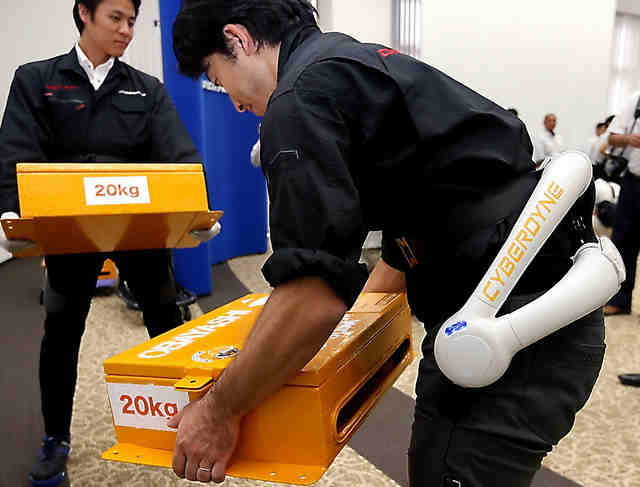 Here is the daily roundup from Japanese consumer tech and tech business websites for Dec. 12, 2014.

Major Japanese construction company Obayashi Corporation will be conducting further testing of Cyberdyne’s newest HAL exoskeletal robots in actual applications. The work load will be increased two-fold, as part of the company’s campaign to promote its updated features.

Officially introduced last month, the new industry assistant-type HAL exoskeletal robots are specifically designed as augmentation tools, to provide extra lifting power to workers. Obayashi Corporation has already introduced the new HAL robot to a considerable number of construction sites for quite some time, and had proven its practicality in many applications. This time, the company plans to prove its practicality even further by doubling the workload given to its users, promoting the exoskeletal robot as a possible industry standard tool.

First developed way back in 2012, Panasonic’s visible light communication system was conceptualized as a new method of transferring minute information from one device to another. The version developed for mobile devices uses the same principle, having a function not too different from QR codes, but is designed to be more convenient. The LED signs will act as “Hikari IDs” (light IDs), transmitting data from as far as a few meters away, and sending it at speeds comparable to standard wireless technologies.

Panasonic expects the technology to become commercially available in 2016.

Fujitsu Labs has recently presented to the public its new open data analysis tool, which is made to analyze and provide comprehensive visual data of any geographical spot within Japan.

Named as the EvaCva, the tool is capable of using retrieving various web data about any geographical spot in Japan, presenting it in a visual easy-to-understand form. It can check for different aspects about the area, regardless of whether the data required is meteorological, environmental, economical, social, industry-based, or purely geographical. The visual charts and graphs that the analyzer tool will automatically generate would give the user a more or less accurate representation of anything that a specific area may have.

The EvaCva geographical analysis tool will be available as a web application sometime around the end of 2015.