Ubisoft (EPA: UBI) has released a new patch for console versions of Assassin’s Creed: Unity that clocks in at a whopping 6.7 GB of data.

Normally when games are patched, players have to download small fragmentary bits and pieces that range from 10 to 100MB. The latest patch for Assassin’s Creed: Unity, however, is almost 7GB, and every bit of it is aimed at “alleviating performance issues and improving the overall experience”.

But why is it so big? Is the game really that broken that a single patch has to take up 17% of Unity‘s total install size?

So most of the data is actually replacing in-game content, and the developer claims that because a “large portion of the patch replaces existing files”, that the update should be less than 6.7GB.

“Part of the team’s effort to enhance frame rate for players involves replacing and updating portions of the Paris city map where we are seeing issues. This explains the large size of this title update (6.7 GB).”

Oh and it looks like Ubisoft’s newest patch has broken more than it’s fixed, leading to yet another blunder. 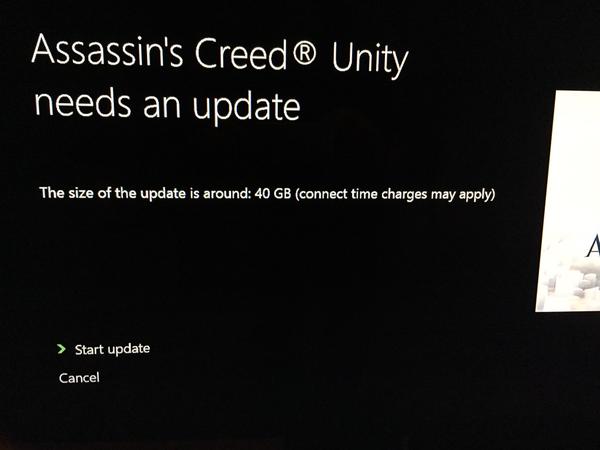 It appears some Xbox One users who try to download the patch are met with a glitch that makes them re-download the entire game again, along with the 6.7GB update. Ouch.

Remember all those AC: Unity Xbox One bundles Microsoft just sold? Remember how the Xbox One outsold the PS4 in November? Well it’s fair to say a good portion of those gamers will be met with needless aggravation (myself included).

To add insult to injury, Ubisoft doesn’t have an ETA when this will be fixed, but assures gamers that they’re working with Microsoft to fix things.

“We have received and confirmed reports that some Xbox One players who have previously applied Patch 3 are seeing a 40GB download instead of the expected 6.7GB download.

“Unfortunately, an issue with the patch downloading process is replacing the entire game instead of just the parts affected by the patch.

“This is obviously not the expected behavior, and we apologize that many of you will have to wait longer than expected to complete this download. This issue isn’t causing any other problems and once the download is completed players will have the most-up-to-date and fully patched version of Assassin’s Creed Unity.”

So on top of the fact that you’ll have to download almost 7GB just to play the game, if you own an Xbox One, you might have to re-download the entire game over again. So much for a fix, eh Ubisoft?

In any case, thiss new update marks the fourth patch that Ubisoft has released in an effort to put the game’s broken pieces back together.

Unity launched a month ago in a blatantly unfinished state that saw a dazzling array of bugs and poorly optimized performance issues–some of which are only just now getting fixed.

As a result of the game’s turbulent launch state the company’s stock actually took a dive, making it a very serious issue. Ubisoft recently owned up to their mistakes and publicly apologized for the glitches, and is giving away free DLC and a free game to season pass holders.

Patch 4 was originally slated to release yesterday, but Ubisoft pushed it back at the midnight hour to ensure preparations ran smoothly. Now it can be downloaded across PlayStation 4 and Xbox One flavors of Unity, but the PC version isn’t yet available.

We can only guess as to how many gigabytes of patch data that gamers have to download before AC: Unity is where it should have been on launch day, or when Ubisoft will actually start extensively testing the content and patches they release.

For your curiosity we have a copy of the full patch notes for your perusal, along with the amended update regarding the Xbox One error.

Here are the details of Patch 4. This Patch is rolling out to PS4 now, and will be available for Xbox One players later today (December 16). PC players can expect the patch later this week.

Stability, Performance and Save Game