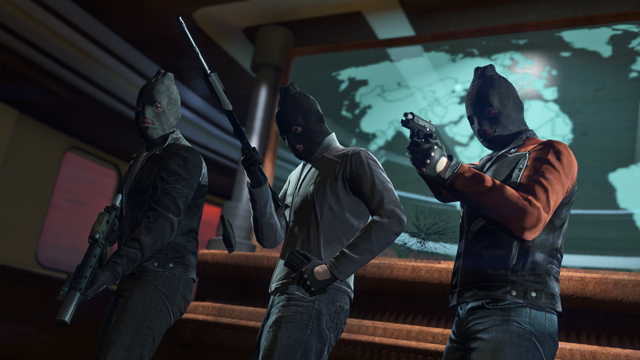 Gamers have been patiently waiting for GTA V‘s online heists for over a year now. Well I say patiently, but that’s not exactly true: the GTA Online forums have seen innumerable posts demanding information on the mode’s launch, and players have passed the time as they always do: by wreaking total havoc across Los Santos.

Now Rockstar delivers the good news: the waiting will be over sooner rather than later.

While the studio hasn’t pinpointed an actual release date, they affirm eager criminal masterminds that GTA Online heists will be arriving “early 2015” across PS4, Xbox One, PS3, Xbox 360 and PC.

And as originally planned, heists will be completely free of charge. But what took Rockstar so long? Heists were supposed to be launched quite some time ago.

It turns out that the heists are a lot more dynamic and layered than we thought. The heists will comprise over 20 hours of play, with five unique “strands” and a total of 20 missions.

Instead of being your average run-of-the-mill online multiplayer playlist, heists involve weaving storylines wherein players must communicate and coordinate an effective gameplan at all times, playing to their strengths in various roles.

In a recent interview with IGN, GTA Online lead mission designer and producer Imran Sarwar explained that the heists are challenging, multi-tiered co-operative missions that culminate in an explosive end-level climax.

“So we started working on the concept (of heists): a series of multi-tiered missions featuring diverse prep work, a range of different types of gameplay and a big finale, where team coordination and playing your own distinct role could make the difference between success or failure.

“We also wanted each one to have a unique thread that brought you back in touch with some of the characters from the story.”

And since Rockstar wanted “every player to be central to the action at all times”, it took them a while to get things squared away. 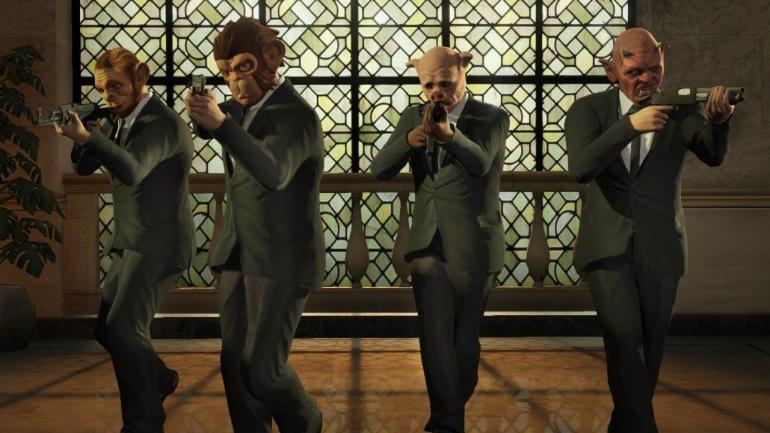 Every crew member has their own specific roles in a heist, and communication is paramount at every turn.

So what kinds of roles will players take on?

As a getaway driver, for example, you won’t be stuck waiting outside twiddling your thumbs in an idling car while your teammates have all the fun–you’ll get in on plenty of the action, and much of it will be tailored specifically for your role.

“A good example is the classic idea of your getaway driver, waiting outside of a bank for the big score. A movie might not spend too much time focusing on that person because while they are waiting, we are watching the action going down in the vault.

“In a similar situation in Story Mode, we could use a character switch to make sure the player was always in the center of the action and switch back to the driver later.

“But to make this work for multiple players, we needed to create situations where the driver has something interesting to do at exactly the same time the rest of their team are locking down the bank and making their way to the money.”

Just like in GTA V‘s story mode players can set up the heists on makeshift planning boards and set things up. Heists require a team of 4 players at least 12 rank or above, and the designated leader has to invite other members to form a crew.

The leader also assigns roles to each crew member, playing off his or her strengths 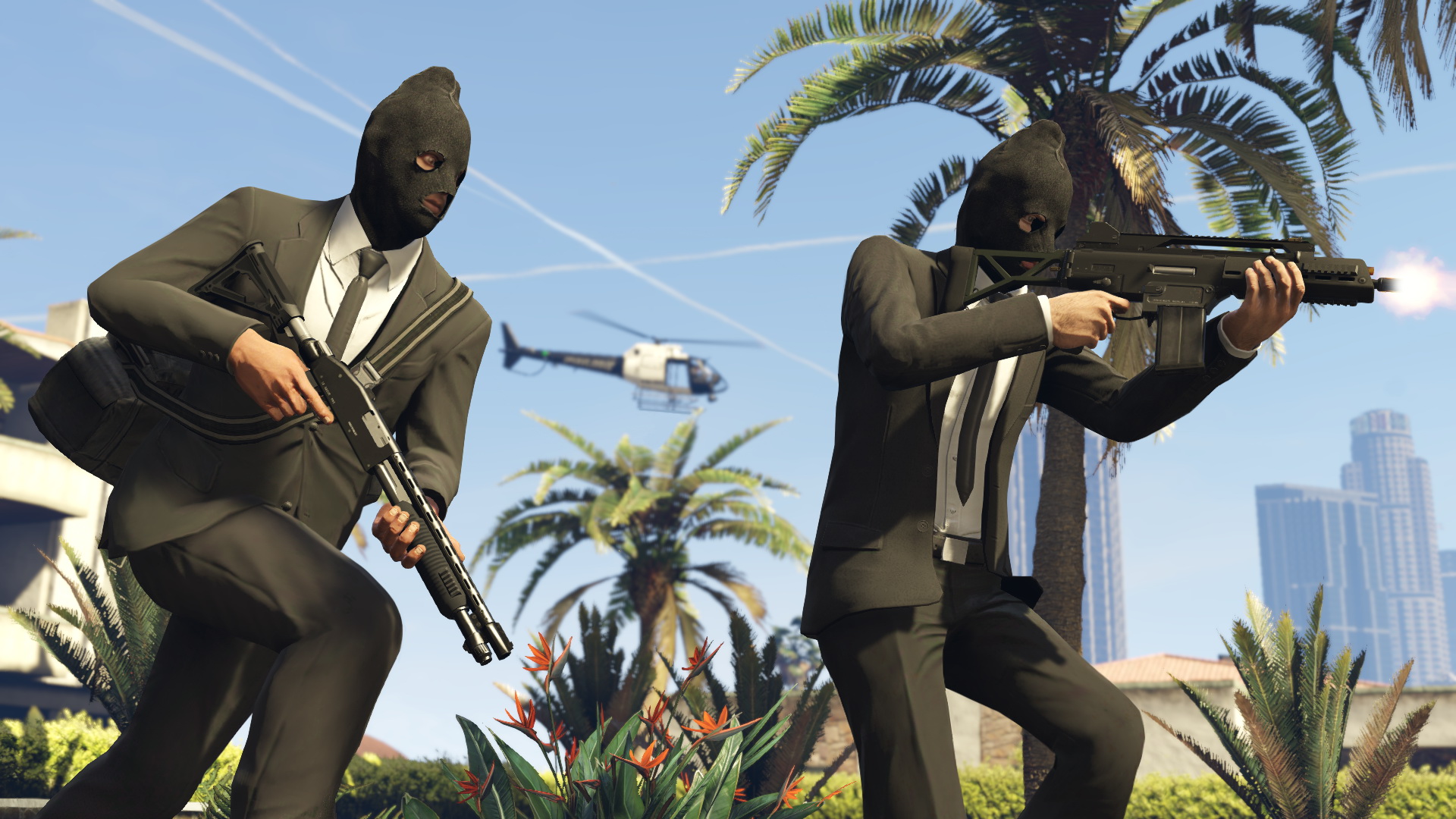 Players will have to work together throughout every aspect of the heist, and sometimes will need to break off into groups for certain missions.

The heists are broken up into stages: planning, prep missions (gathering specific items and completing tasks) and the heist proper. Sarwar says that the prep missions will be pretty substantial and varied, and will have players doing a number of things in order to set up the big score.

Co-operation is emphasized in every aspect of the heist, and Sarwar affirms that players will really need to work together to pull off the missions.

“Some missions have all players working as one unit, some require players to take on specific tasks like hacking or crowd control, while others require players to split into smaller teams to complete separate high value objectives.

“For example, one team may be stealing a getaway car from some gangsters while another team is attempting to sneak into a police station, all within the same prep mission.”

Players are given access to a range of weapons and vehicles that are tailored to the specific objective, and each stage features its own set of ready-made tools to aid crew members.

Every heist will have its own action-packed finisher, and will see all players taking on a host of different roles throughout the action. According to Sarwar, heist finales are “big set pieces” that often include characters from GTA V‘s story mode, and ultimately weave multiplayer with the singleplayer experience. 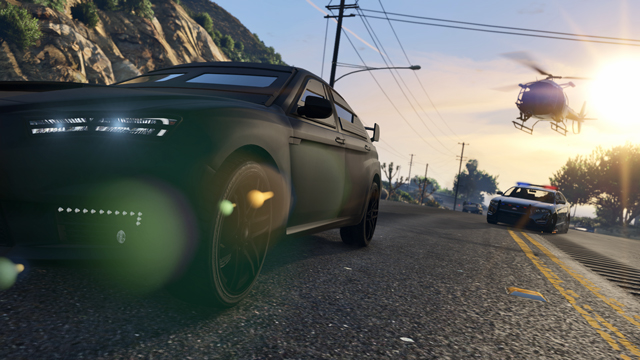 Heists will include getaway chase sequences across multiple vehicle types.

Now that we know all about the heists, the waiting will be even harder. But Rockstar is giving out a “small Christmas gift” to keep players busy while they wait (and to make up for the heists being so late).

We don’t know what the gift will be–it could be a holiday-themed update, or maybe some new weapons–and Rockstar is keeping it a surprise for now.

VG247 also caught word that GTA V‘s PC specs will be announced sometime next week. In a response to a comment regarding the PC version on a recent news story, Rockstar wrote the following:

“We’re presently in the final stages of development on the PC version of Grand Theft Auto V and hope to have confirmed official system requirements to share soon here at the Newswire.

“Please stay tuned for that to be announced in the coming week. Thank you and we’re very excited to bring GTAV to the PC gaming community!”

Grand Theft Auto V will release on Jan. 27 for PC, and the new heist mode will be available sometime after its release.