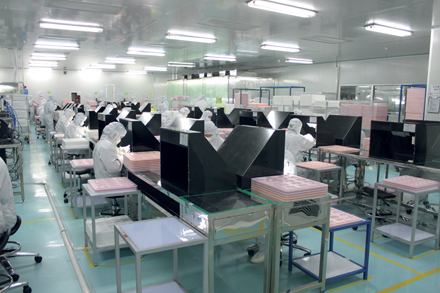 One of Taiwan’s leading touch panel makers TPK Holding’s (TPE: 3673) share price went up on Jan. 20, after Japanese brokerage Daiwa Securities raised its recommendation on the stock a day earlier.

The buying also reflected hopes that TPK will be benefited from the launch of Apple’s (NASDAQ: AAPL) Apple Watch, which is expected to hit the market in March.

Marbo Securities Investment Consulting Analyst Chang Chih-cheng (張志成) said it was not surprising that Daiwa Securities’ upward revision of its rating for TPK shares led investors to pick up the stock soon after the market opened on Jan. 20.

“It seemed to me that market sentiment toward the stock has been improving,” he said.

Daiwa Securities said in a research report that was released on Jan. 19 that it had raised its recommendation for TPK shares to “outperform” from “sell” and upgraded its target price on the stock to US$6.87 from US$4.43. The Japanese brokerage said that TPK is expected to secure more Apple orders because it will ship touch panels for Apple Watch production.

Apple’s invoices will also bring TPK back into the Apple supply chain, which could bolster the touch panel company’s shipments and earnings growth.

“Many investors have agreed with Daiwa Securities in terms of Apple Watch expectations,” Chang said. “Many are upbeat that Apple Watch will become the new anchor for TPK’s earnings and help the company climb out of its doldrums seen last year. If Apple Watch hits the market in March as expected, it means that TPK’s sales should get a lift in January. We have to pay attention to the company’s upcoming sales report.”