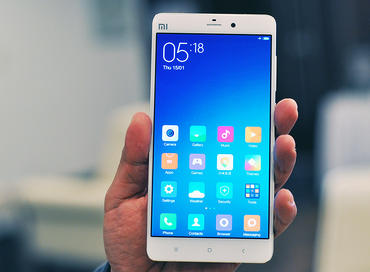 Priced at US$412 for the Mi Note Pro and US$372 for the Mi Note in China, the former sports Qualcomm’s Snapdragon 810 chipset, 4GB of RAM, and a quad HD display, while the latter is equipped with the Qualcomm Snapdragon 801, 3GB of RAM, and a full HD display. The Chinese smartphone maker also touted the fact that unlike the iPhone 6 variants, the rear camera sits flush with the phone’s body, and does not protrude like the American flagship.

“The newly debuted flagship model is evidence of Xiaomi’s strategy to expand its product portfolio in 2015,” said Jasmine Lu (呂智穎), a Taipei-based analyst with Morgan Stanley. “Competition is intensifying in China and overseas expansion will take time to bear fruit, but we believe Xiaomi can still outgrow peers via a broader mix.”

Lu, meanwhile, estimated that Xiaomi will begin its mass production of the Mi Note sometime in February or March, with shipments forecast to total eight million to 10 million units during the whole product cycle.

The analyst said that FIH Mobile (HKG: 2038), a unit for Taiwanese contract electronics maker Foxconn Technology Group (TPE: 2354) and one of Xiaomi’s suppliers, will benefit from a higher average selling price for casings and will gain about 50% of the assembly orders.

“This means that Xiaomi is expected to contribute around 13% of FIH’s total revenue in 2015 and more than 45% of its gross profits this year,” she said.

Display panel suppliers Wintek (TPE: 2384) and TPK (TPE: 3673), however, will not be included in the list of Taiwanese companies set to benefit from Xiaomi’s phablet sales although these two screen and touch panel manufacturers have been Xiaomi’s partners since 2013, now that Xiaomi decided to commission Japanese competitors Japan Display (TYO: 6740) and Sharp (TYO: 6753) for the job.

In order to achieve the Mi Note’s 7-mm thickness, which is 0.1-mm thinner than the iPhone 6 Plus, Xiaomi had adopted the in-cell touch display technology made by the Japan Display and Sharp, over TPK’s touch-on-lens and Wintek’s on-glass-solution.

Xiaomi observed a sales drop during the fourth quarter last year. The sales drop was related to its then-supplier Wintek’s being beleaguered by ailing financial condition and is in the midst of a restructuring process. The Taiwan-based touch panel maker supplied touch panels for both Apple and Xiaomi. In an attempt to vie more orders, Wintek invested large sums of funds to increase its production yield. Much of the funds were used to build new facilities in Dongguan, China, and Vietnam. The much lower-than-expected demand for touch panels, combines with competition from Chinese rivals, however, caused Wintek great losses on assets. Wintek filed a petition to the court last October for seeking business restructuring.

The announcement surprised many of its clients, including Xiaomi, which was also forced to find a new touch panel supplier. With a new supplier, it also took more time for quality control and to increase capacity, which also affected Xiaomi’s smartphone shipments for the fourth quarter last year.