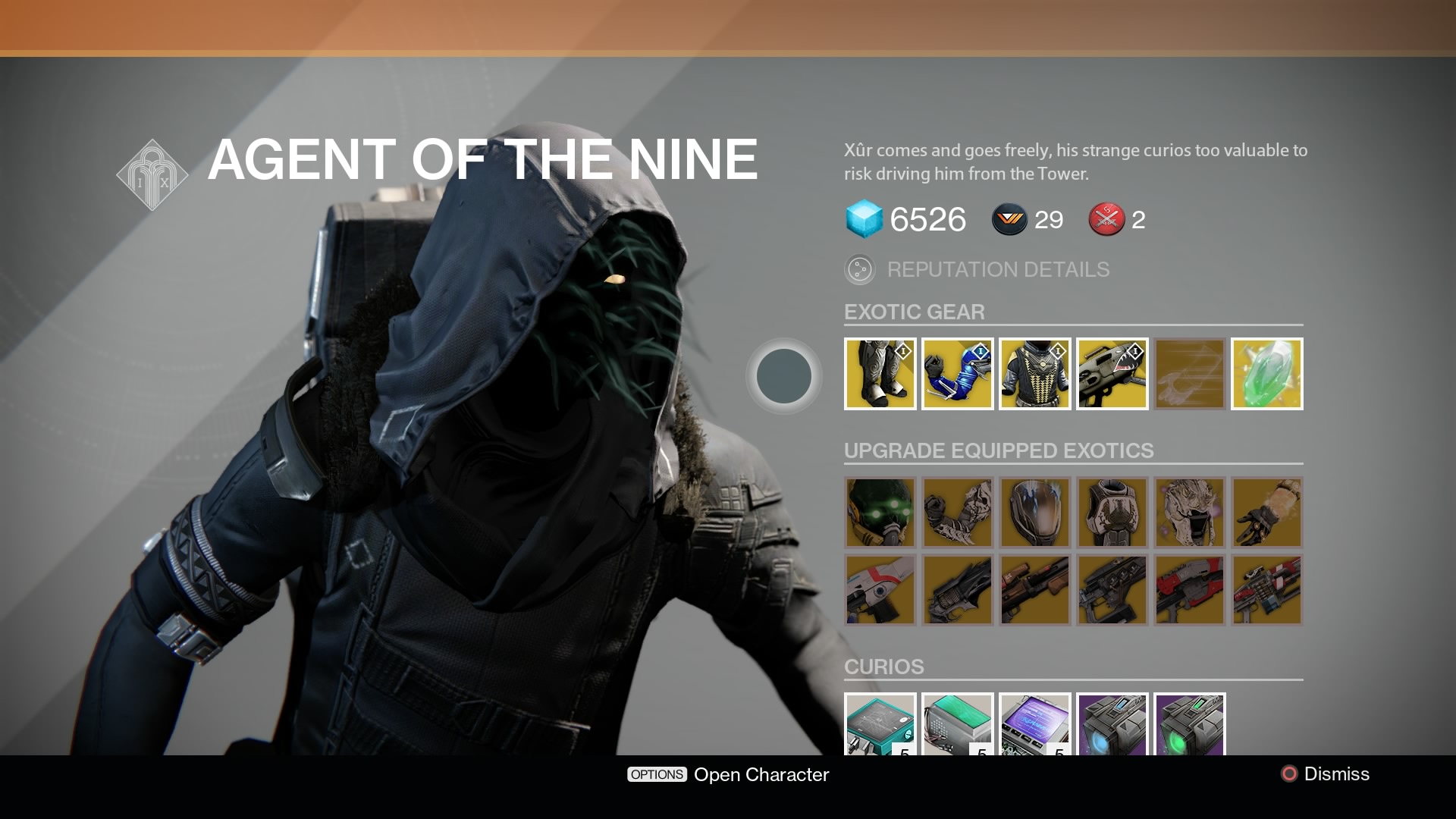 Xur’s weekly visits to the Tower of Guardians used to be something worth looking forward to. You never knew what the shadowy merchant would have next, and the anticipation was exciting.

But like most of Destiny‘s content, buying items from Xur has become a stale endeavor. There’s simply not enough exotic items in the game to bring any more surprises, leading to repetitive rotations that have become increasingly predictable. 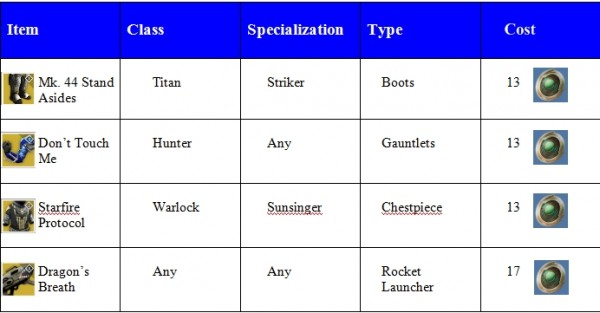 Also Bungie has once again locked all non-DLC owners out of buying any new exotics from Xur. This, along with Xur’s inventory, really isn’t surprising,and at this point I would say that most of the people who still play Destiny have the DLC anyway.

Oh, and for the third week in a row, Xur doesn’t have Heavy Ammo Synths. Great way to punish your players here, Bungie. 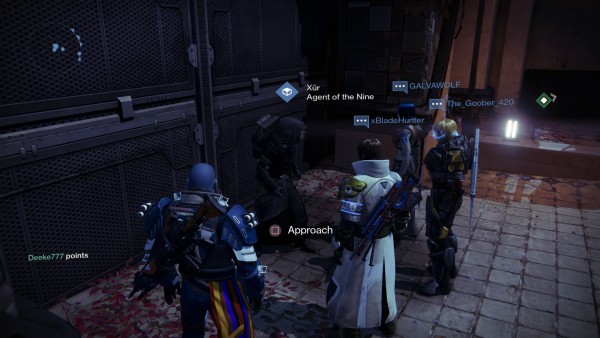 On the other hand, he does have some Handcannon and Rocket Launcher telemetries that are perfect for leveling up your Hawkmoons, Thorns and Gjallarhorns. Don’t forget the Fusion Rifle telemetries that boost exp for your new shiny upgraded Pocket Infinity.

In any case, below we have a full expansive breakdown analysis of Xur’s current wares. This week the dark otherworldly purveyor of goods can be found in one of his usual haunts, this time right outside the Speaker’s quarters. 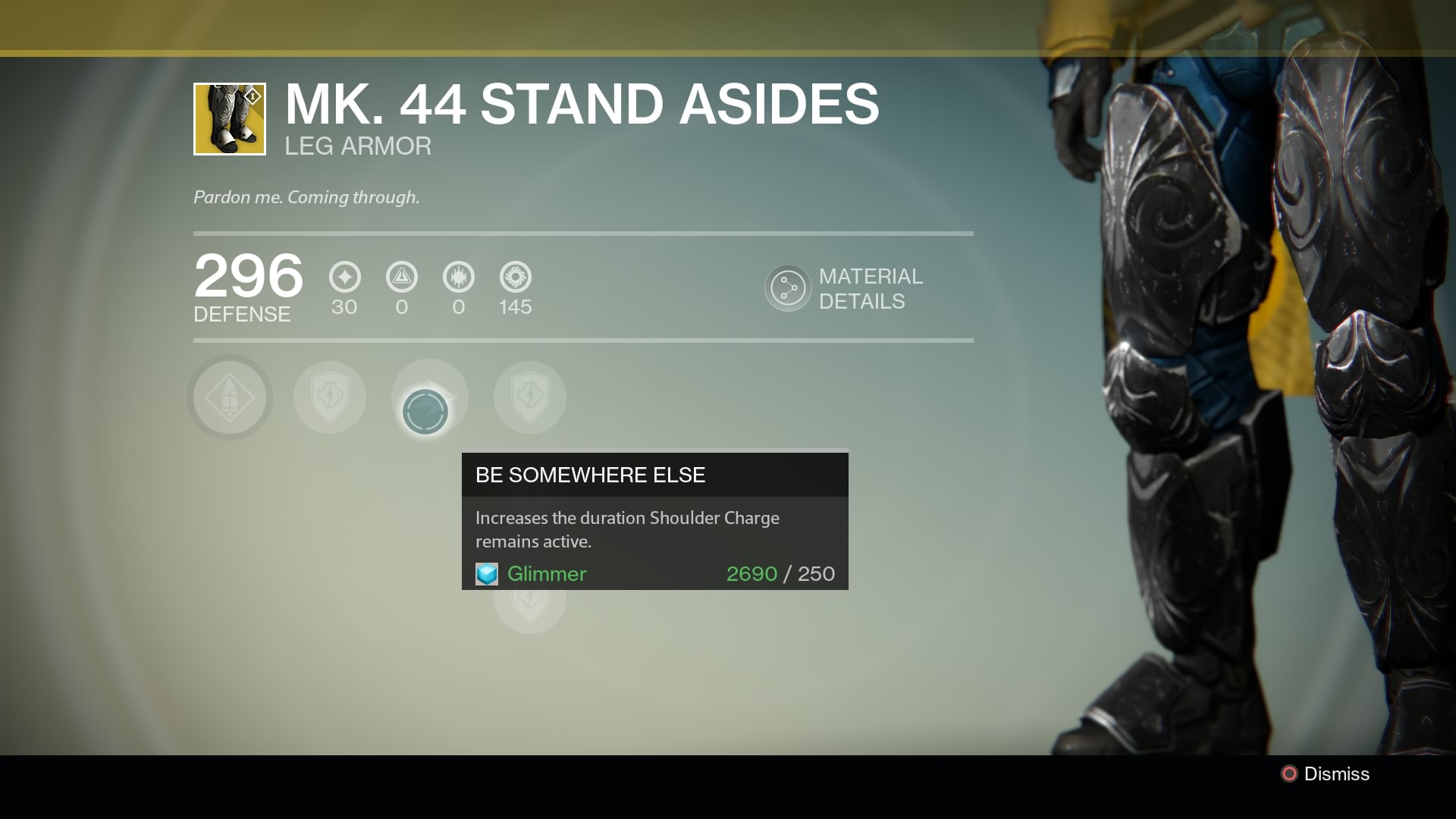 “Pardon me. Coming through.”

No. Stay away from these boots. There are a ton of better exotics for a Titan to use that have much better uses–the Helm of Inmost Light comes to mind, as does the Helm of Saint-14 or the Glasshouse. If you’ve got Strange Coins burning a hole in your pocket, just wait it out. The boost in heavy weapon ammo is a nice touch, but overall they don’t offer much use and take away your precious exotic armor slot. 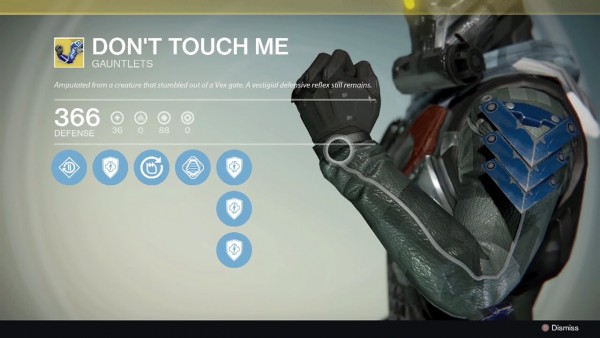 “Amputated from a creature who stumbled out of a Vex gate. A vestigial defensive reflex still remains.”

Maybe. These gauntlets have a high utility, but their effectiveness is situational. They’re great for running by baddies when you’re getting overwhelmed, as you’ll get three seconds of precious invisibility on a melee hit, which can be boosted thanks to the Bladedancer’s Shadowjack talent.

But this particular pair have a lower stat roll, so it’s iffy, and it definitely depends on what other exotics you have in tow. It’s good to have a backup pair of these laying around, so pick them up if you have the extra Strange Coins, but don’t expect to use them too much. 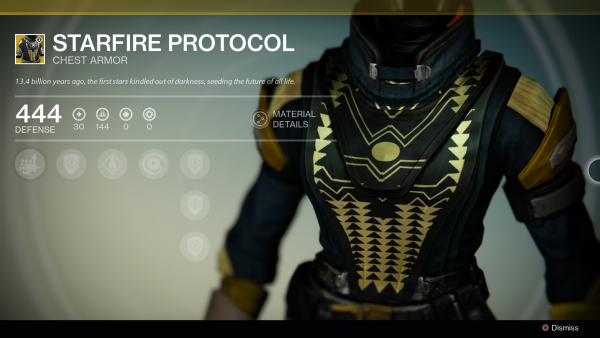 “13.4 billion years ago, the first stars kindled out of darkness, seeding the future of all life.”

Maybe. This piece of armor is ideal for Sunsingers who also have a great fusion rifle in tow (Pocket Infinity, Plan C and even the Vex Mythoclast all synergize well here). Plus you get an extra Fusion grenade to boot, but sadly it won’t stack with the subclass’ Gift of the Sun passive.

Pick it up if you have the coins or don’t have anything better for your Sunsinger (like the Sunbreakers, for example) but otherwise save them up. 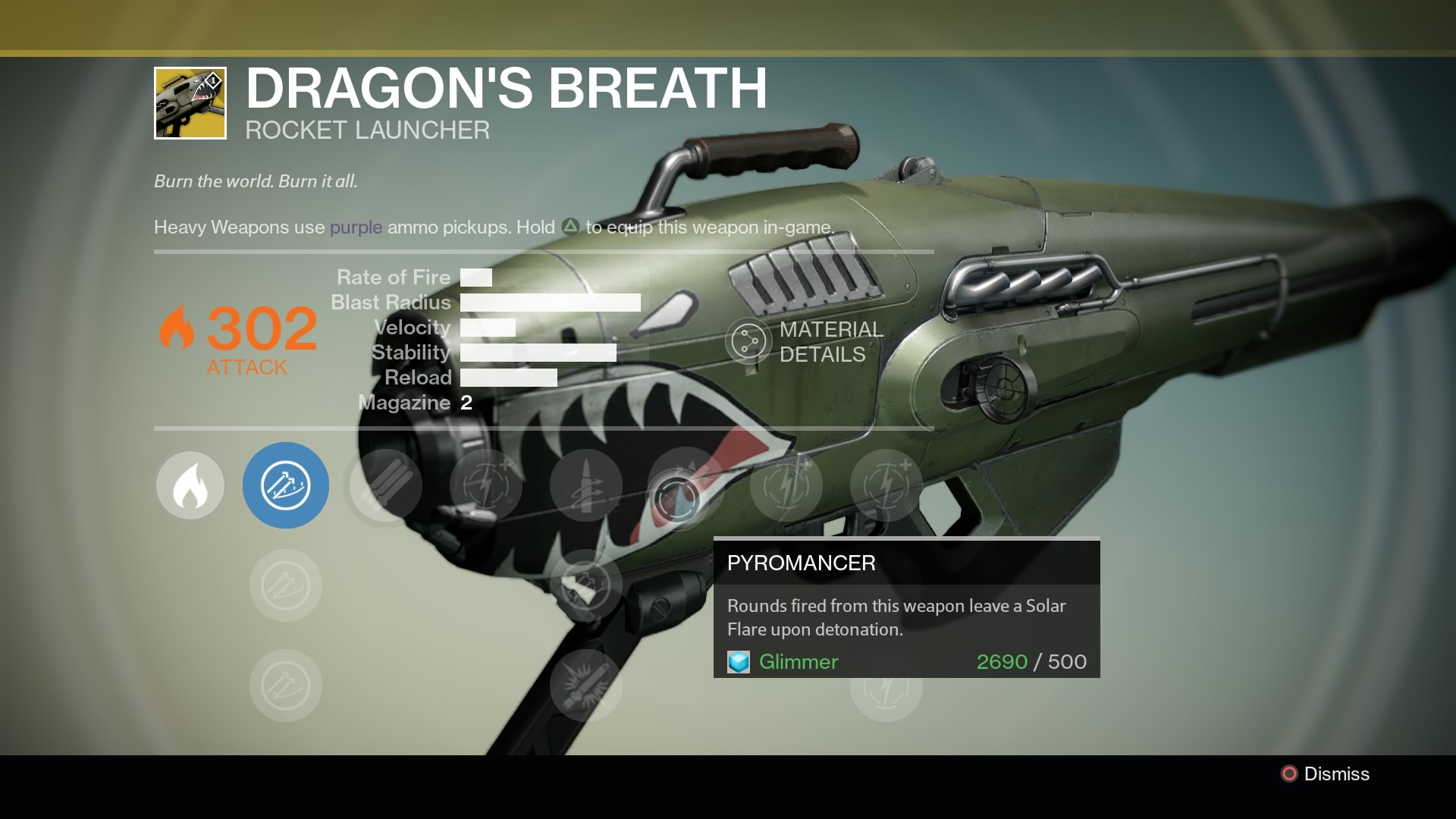 Maybe. If you have the extra strange coins, the Dragon’s Breath is a decent Solar-powered rocket launcher. The only trade-off is that it takes up your exotic weapon slot, and odds are you’d use it for specific situations like when Solar Burn is added to Weekly Nightfall Strikes.

Stick with legendary rocket launchers for everyday use, but it’s always good to have a powerful launcher in your arsenal just in case. 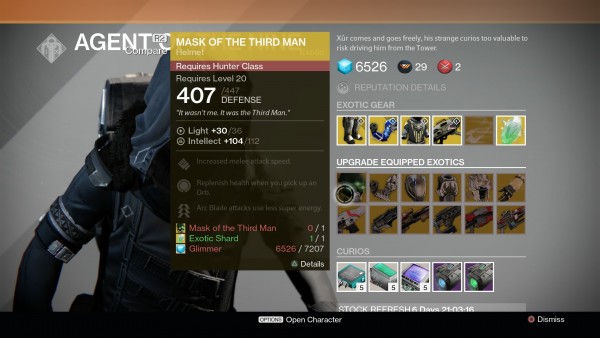 Some interesting armor upgrades are available, but overall it’s more of the same. We have some junkers–like the Mask of the Third Man–but there’s a particularly good Helm of Inmost Light on the market, along with a pair of decent Sunbreakers on the off-chance your Sunsinger needs some new fiery gloves.

Pass on this one. The upgrade is a waste of a shard, with a low roll for an item that already has bland appeal.

Pick it up. This is a great opportunity to upgrade this fantastic Striker helmet, with a strong max 127 Strength roll along with the other obvious bonuses.

Pass. Low stat roll for an item that’s pretty much a waste of an exotic slot when compared to the ultra-useful Achlyophate Symbiote helmet.

Another lower Intellect roll, and in all honestly this one won’t really do you any favors. The asking price is too much for an upgrade, and chances are you’re better off scrapping this armor if you should find it. Stick with the Armentarium or a dual-stat Legendary instead. You don’t want to take away from the great Titan exotic helms out there.

Stellar stat roll here, but the best Voidwalker exotic is the Obsidian Mind. Pass this up despite the great roll, as the price tag is hefty. Also equipping this helmet takes away your exotic armor slot, so you won’t be able to use interesting pieces like the Voidfang Vestments.

Pick it up. If you’ve yet to upgrade your pair of Sunbreakers, then now’s a good opportunity to do so. Keep in mind you can snag an extra shard by trading in your motes for an exotic engram, and then break it down (assuming you don’t get an even better pair of Sunbreakers). 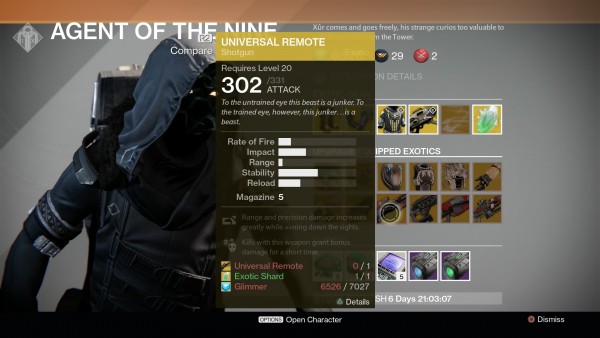 This week’s weapon upgrades are unimpressive with a ton of staples we’ve seen time and time again.

Then again it’s hard to keep things fresh when there’s so few exotics available. Even still, it’d be nice to see Bungie do something special for non-DLC owners, as they can only buy items in the upgraded sections this week.

Pick it up. The Suros Regime is a fantastic go-to auto rifle that has a ton of utility and firepower that naturally compliments any play style.

Pick it up. The Thorn handcannon is a great solution to a number of Destiny’s problems, whether it be PvP or PvE solutions. It packs quite a bit of punch, and the Mark of the Devourer mod adds a poison-like bleed effect that deals damage over time. But seeing as you have to have the gun to upgrade it, you probably know that already.

Personally I’d pass on this one. Shotguns can be great for PvP, but they aren’t really an all-around weapon of wide use. Keep your shards for something better–like the Hawkmoon (if it ever comes back around in Xur’s upgrades).

Definitely upgrade this one. The upgrade is a significant boost even if it doesn’t feel like it, and it makes one of the best weapons that much better.

Since Xur sold these not so long ago, odds are you probably don’t need to upgrade it. But just in case you do, now’s the perfect time to get that awesome damage boost on an already staggeringly powerful gun.

Maybe. This gun is swell enough without that extra bit of damage, and chances are you won’t be using it very often anyway. On the off-chance you have a Guardian who finds tons of Heavy Ammo, Super Good Advice could very well be a fantastic tool in your arsenal. It just depends on your play style. 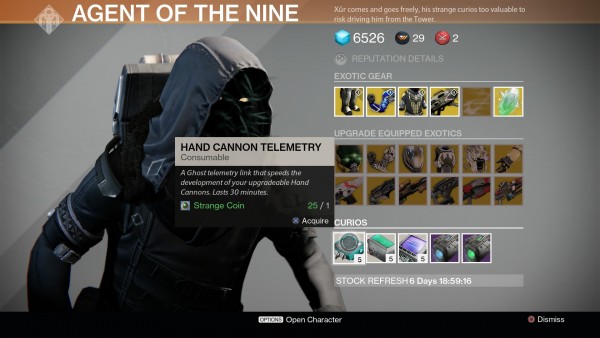 Xur has some great curios this time around. But as we mentioned before, for some reason Bungie doesn’t want anyone to have heavy ammo stacks–probably because of items like the Mk. 44 Stand Asides or the Relic Wings are on the market.

You should pick up at least one stack of each type of telemetry, as they’ll compliment your new snazzy upgraded weapons. Plus you’ll have some exp boosters left over for next week’s possible upgrades, too.