Rise of the Terminators,  a new trailer for the Streum On Studio’s  PC and console First Person Shooter Space Hulk: Deathwing is here.

As one of the long line of games inspired by Games Workshop’s famous Space Hulk board game, Space Hulk: Deathwing is being developed with great care and respect for the licensed source material. As seen in the new trailer Rise of the Terminators it will immerse the player in the Warhammer 40,000 experience as he dons the mighty Terminator armor and battles the hordes of ravenous Genestealers.

Space Hulk games are based on the concept of gigantic asteroids, derelict ship wrecks and other spatial debris that drift along the currents of the Warp. In the Warhammer universe the Warp is the immaterial dimension of Chaos, a twisted place where someones mind and body is under constant attack by the everychanging and shifting mutable energies. As dangerous as it is, the Warp is being used for many things, from psychic powers to traveling accross the universe.

Full of treasures from many factions in the Warhammer 40,000 universe these floating hoards full of goodies are sought after by pirates and adventurers. The Story of Space Hulk board game focuses on the situation when Genestealers,  xenomorph creatures based on Aliens, infest one of these hulks and drift across the space until some poor suckers try to loot it. Their victims get slaughtered or assimilated and the circle continues. 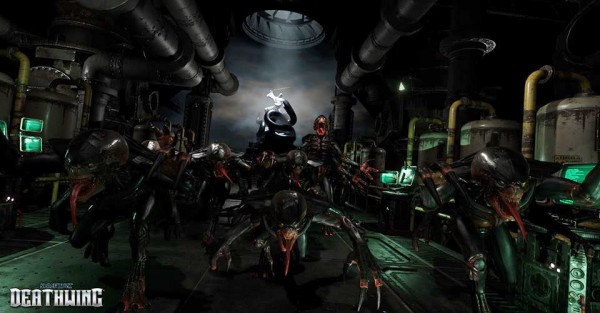 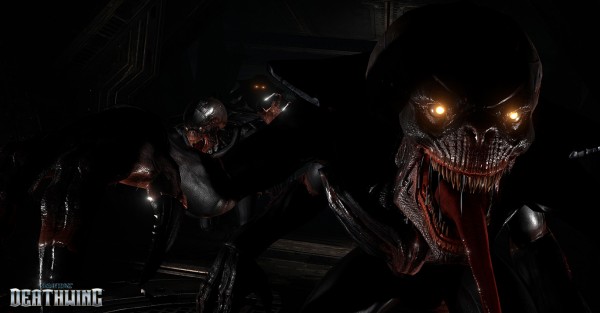 Space Hulk: Deathwing puts the players into a role of Space Marine wearing a Tactical Dreadnought Armour, more commonly known as Terminator Armour. As a member of the most mysterious  and feared Space Marine Chapter, Dark Angels, the player will fight the Genestealer infestation to the bitter end.

Founded on July 16th 2007 Streum On Studio  released their first commercial production called E.Y.E: Divine Cybermancy in 2011. Both the players and the press were impressed by the quality of the world, the artistic design and especially the gameplay offered by the team. Now Streum On Studio is proud to bring their skills to the Warhammer 40,000 universe.

Space Hulk: Deathwing is being developed for both consoles and PC.