Nearly a decade before Stuxnet and Flame were household words, malware that has some genetic similarities was infecting computers in targeted regions across the globe stealthily burrowing itself into hard disks and flash drives.

That was the topic of a report presented by Kaspersky Lab researchers at the group’s annual summit in Cancun, Mexico. Kaspersky Lab said that the malware is some of the most advanced it has ever seen, and has traced back its origins to as early as 2001. Resarchers from Kaspersky Lab have given the organization behind the malware platform the same “the Equation Group” (likely because of its preference for mathematically complex attacks) and the actual software names like EquationLaser, EquationDrug, DoubleFantasy, TripleFantasy, Fanny and GrayFish.

“The Equation group is probably one of the most sophisticated cyber attack groups in the world; and they are the most advanced threat actor we have seen,” Kaspersky Lab said in its report.

Out of the toolset discovered by Kaspersky Lab researchers, two items stand out for their complexity: Fanny and GrayFish.

According to researchers the purpose of Fanny is to map out air gapped networks, and allow for malicious commands sent from a master server to run on these networks. 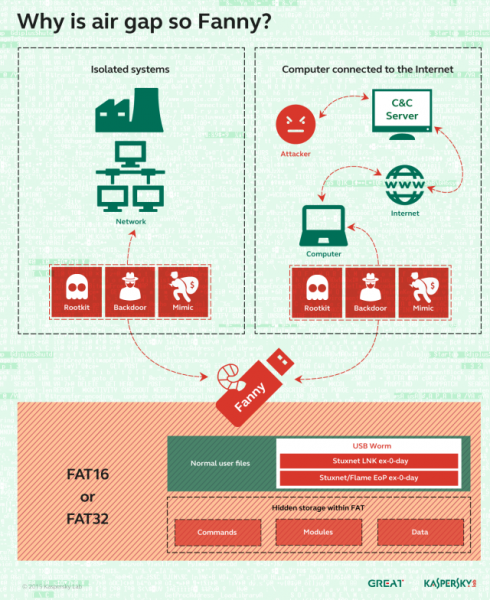 Kaspersky Labs doesn’t directly suggest that the malware suite is the product of efforts by the NSA, but say that it’s definitely the outcome of efforts by a highly advanced electronic intelligence organization.

In 2012 Wired magazine published an interesting feature, outlining the relationship between the founder of Kaspersky Labs and Russian intelligence services. It’s worth a read considering the group’s report.