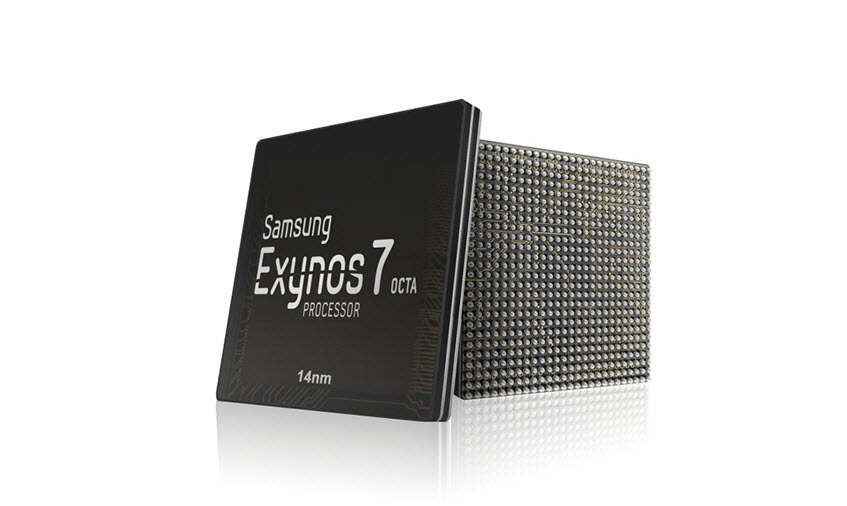 Samsung (KRX:005935) is set to continue the momentum it built last year with its in-house Exynos line of SoCs with the first Exynos 7 chip to be built on a 14nm FinFET manufacturing process.

The next-generation Exynos will be first seen in the Galaxy S6, with Samsung likely fielding the Exynos 7 exclusively in the device, unlike earlier years where the South Korean manufacturer went with a combination of Qualcomm-based (NASDAQ:QCOM) hardware for LTE markets and an Exynos solution for its home market and non-LTE countries.

This time around, Samsung is confident in its abilities of delivering a robust LTE modem, which is possibly the reason behind going with an Exynos-only model of the Galaxy S6. The Exynos 7 SoC that was introduced today will likely be called the Exynos 7 7420, and like Qualcomm’s high-end Snapdragon 810, the Exynos 7 uses eight cores in a big.LITTLE configuration. These include four ARM v8-based Cortex A57 cores clocked at 2.1 GHz along with four Cortex A53 cores. The big.LITTLE configuration allows the availability of all eight cores for intense workloads.

Samsung mentions that by going with a 14nm manufacturing process, it is able to achieve an increase in performance to the tune of 20%, along with a productivity gain of 30% while using 35% less power at the same time when compared to its 20nm SoCs built on an HKMG process.

With the 14nm exynos 7, it looks like the goal for Samsung is to maximise energy efficiency while maintaining a similar performance as the 20nm chips. Samsung is set to unveil the Galaxy S6 on March 1 at Mobile World Congress in Barcelona. The South Korean vendor has announced that its 14nm Exynos 7 will be featured in other devices that are set to launch later this year. We’ll have to wait for consumer-ready hardware to launch before we can determine the prowess of the 14nm SoC, but early benchmarks suggest that the Exynos 7 is faster than the Snapdragon 810 by a healthy margin.