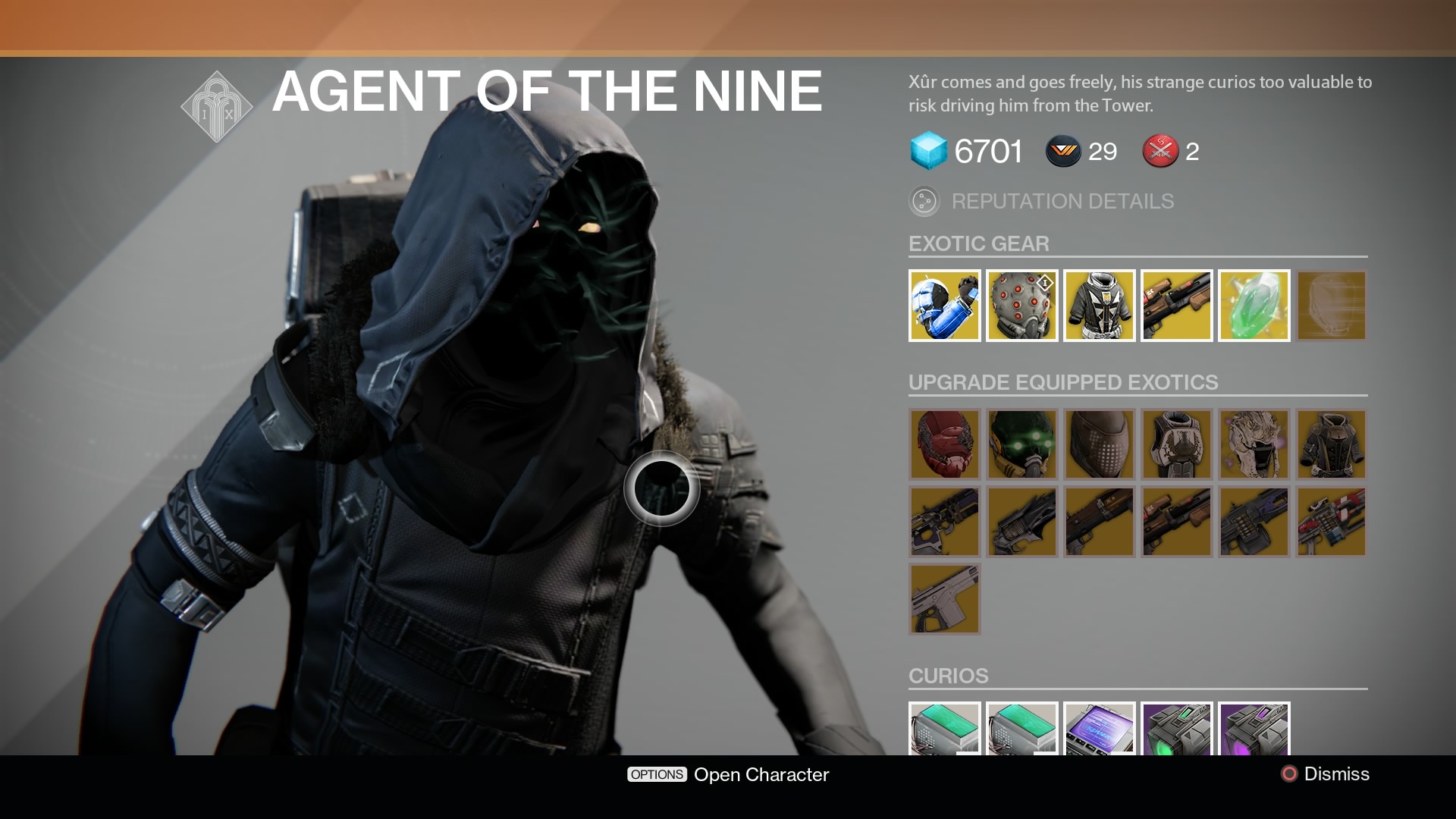 Xur, Agent of the Nine is back again for another week of Exotic item sales, and we’ve dug deep into his inventory to show you if his wares are worth your hard-earned coin.

For Week 25 from Feb. 27 – March 1, Xur has some interesting toys up for grabs, namely the interesting Universal Remote primary shotgun, a new Hunter skullcap that not only looks awesome but sports some nice tactical Golden Gun buffs, and a familiar Warlock armor set that taps into the innate powers of the Sun to decrease cooldowns. 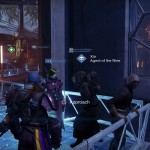 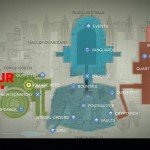 This week Xur can be found in the Tower North, right outside the Speaker’s quarters. This is one of his usual haunts and it’s nice to see him outside of the Hangar and nearby a scenic view.

As far as upgrades go, our shady merchant has some decent gear with some decent stat rolls, like An Insurmountable Skullfort for Titan Strikers, Mask of the Third Man for Bladedancers, and Skull of Dire Ahamkara for Warlock grenade-tossers.

Anyway, let’s jump right into the analysis, shall we? Below you can find our full run-down for Xur’s exotic wares for 2/27 thru 3/1: 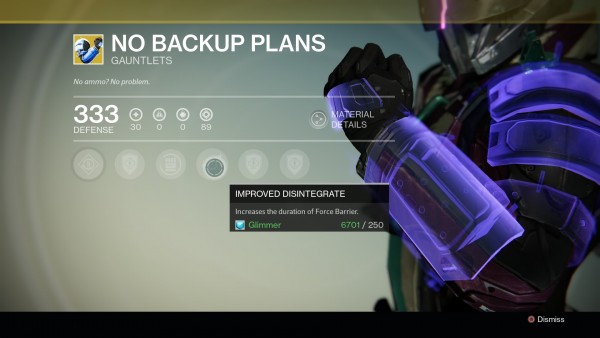 If you’re a Defender Titan, then definitely. Even though the Strength roll is…meh.

Force Barrier is a life saver for every Defender–I can’t tell you how many times I’ve avoided death by strategically planning out my last-hit melee saves with this ability. It effectively gives you an overshield that pretty much saves you while you’re in a pinch, and has a multitude of uses.

You’ll have to give up your exotic armor slot, which means no blinding enemies in your bubble shield with the Helm of Saint-14, so you’ll want to plan accordingly.

Oh,and No Backup Plans’ Improved Disintegrate mod stacks with the Defender’s Relentless talent, meaning your Force Barriers are going to be extra strong and last quite long. 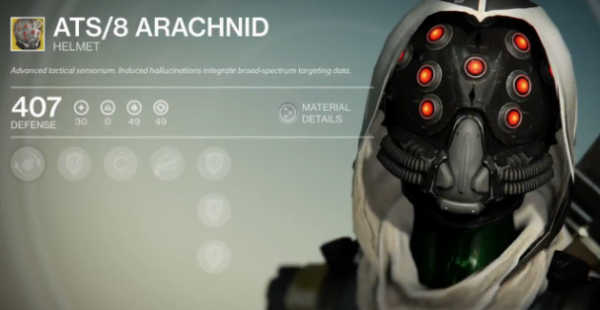 Maybe. This helm looks pretty snazzy, and basically turns the Gunslinger’s Golden Gun ability into a sniper rifle. You get an effective zoom capability to aim at long-range targets while using the ability, adding an interesting new mechanic for PvE and PvP (mostly the latter).

But there’s conditions: you have to have the Over the Horizon or Deadeye perks activated to really get the most out of the helm. While the Achlyophage Symbiote is pretty much your go-to helmet for a Gunslinger, this one does add new interesting possibilities to the mix, so I’d pick it up if you like to experiment and try new things. 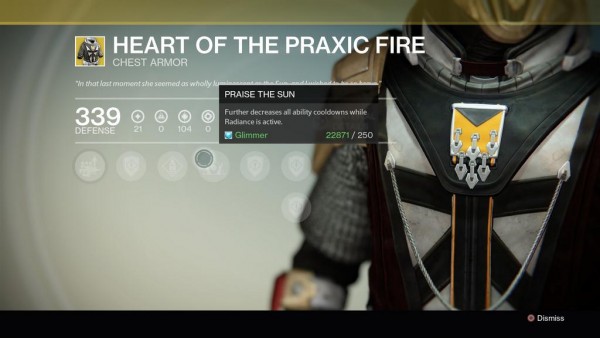 “In that last moment she seemed as wholly luminescent as the Sun, and I wished to be so brave.”

Yes, if you’re a Sunsinger Warlock.

First of all we have a decent Discipline stat roll. Secondly the Heart of the Praxic Fire basically turns your Warlock into a grenade-throwing machine, provided you have Gift of the Sun activated (and you probably do).

Essentially you get an extra cooldown reduction modifier ontop of Radiance, and if you time your grenade throws just right, you can get off quite a few explosive lobs. 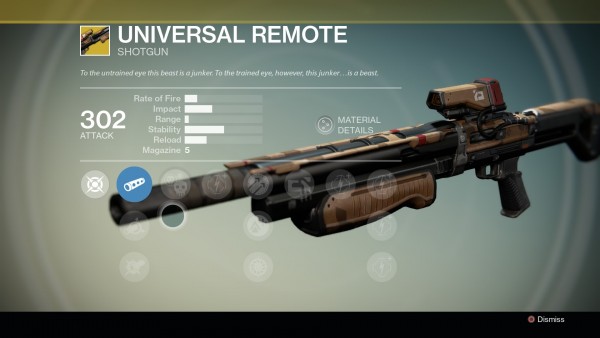 “To the untrained eye, this beast is a junker. To the trained eye however, this junker… is a beast.”

Maybe. Do you love shotguns? Do you love the idea of using two shotguns on the same character? Then pick this one up.

As most of us know, the Universal Remote can be used in your primary weapon slot, meaning you can equip another shotgun in your special weapon slot for double shotgunning carnage.

Plus it has a nice Crowd Control modifier that boosts damage after kills, has upgraded damage right off the bat thanks to Xur, and using the Snapshot perk’s super-quick aiming, you can sprint-slide and cap off an enemy’s skullcap before he even knows you’re there.

Also shotguns received a nice boost thanks to Destiny‘s 1.1.1 update so you’ll be doing even more damage with your double shotty combo. 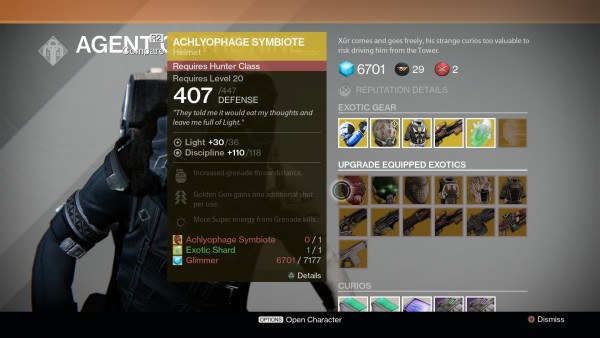 Pretty good stat roll here on a helmet that’s pretty much a must-have for any Gunslinger. Chances are you already have an upgraded version, but if not, considering picking it up. But if you’re a Gunslinger you might want to buy the ATS/8 Arachnid from Xur and do some experimenting.

This is a pretty decent Intellect roll so you might want to consider upgrading. This particular helmet is fantastic for Bladedancers who love wrecking shop in PvP, letting you use your super more often while preserving energy in the process. Stack it up with the Encore talent for some serious carnage.

Low Discipline roll, but this is a fantastic helmet that has a variety of uses. It’s replenish health when picking up orbs is fantastically helpful during a raid, and spawning with full super energy is incredible for the Striker’s super attack that totally destroys in PvP. Also the straight Discipline buff synergizes very well with Lightning Grenades stacked with Aftermath and Aftershock talents.

Since Xur is selling an Exotic Helmet Engram chances are you might be able to roll your own upgraded version, so pick up an engram before you upgrade.

Decent Intellect roll on this piece, so it could make a good upgrade if you have a spare Exotic Shard laying around. The item’s worth is conditional, but spawning extra orbs can help out in boss fights as well as taking down Crota on Hard difficulty.

Middle grade stat roll. This particular helm is pretty great to begin with, and upgrading right now depends on how badly you want that extra defense boost. Of course be sure to check and see if your vanilla version compares stat-wise, and if it’s lower than 114 base INT, then by all means get it upgraded.

The Skull of Dire Ahamkara has a slew of advantages for Voidwalkers. When used in tandem with specific perks like Siphon, Embrace the Void and Soul Rip the helm can seriously boost Nova Bomb frequency for some pretty entertaining havoc.

Plus it has improved Energy Drain which in turn reduces the cooldown of Nova Bombs and grenades, making the helm a formidable strategic asset.

Decent Strength roll here, so if you’ve got a set with lower mods and really want that extra defense, think about picking it up.

It pretty much depends on how much you like using grenades as a Warlock, and if you use a Handcannon and are tired of running out of special ammo to boot. The “spawn with grenade energy” perk applies to all Warlock grenade types so you can effectively use it to toss Sunsinger grenades with Gift of the Sun right as you respawn.

Plus you get an extra voidseeker bolt when you use Axion Bolt. 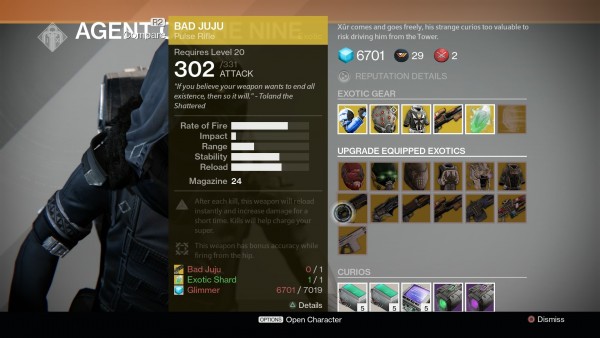 Bungie has just buffed up Pulse Rifles quite a bit in 1.1.1 so now’s a good time as any to upgrade. Bad Juju on its own is pretty damn effective and is a great go-to weapon for Voidwalker Warlocks when used in tandem with the Obsidian Mind helmet; basically you’ll get instant reloads and build up your super after kills, and gain more energy from killing Hive enemies thanks to the Obsidian Mind.

You can also use Bad Juju effectively with the Skull of Dire Ahamkara to build some serious super energy.

Pick this one up. Even when it’s not upgraded Thorn is a very powerful weapon. Sure it’s not as good as the all-star Hawkmoon, but it does the job quite well thanks to its lingering damage and Send It perks. The extra damage is well worth restarting all over again.

If you completed the “A Dubious Task” exotic bounty then chances are you’ve wanted to upgrade your Invective for quite some time.

The shotgun is already pretty beastly, being able to fire full-auto and dealing huge bonus damage with the last round in the mag, and on top of that it can regen its own ammo like the Ice Breaker. The extra boost in damage is amazingly welcome, and you can always use a Shotgun Telemetry to boost EXP progression if you have one.

No real need to shell out an Exotic Shard to buy this when you can just pick it up from Xur’s main inventory for 13 Strange Coins. Either way you’ll be getting a freshly upgraded primary shotgun, but this way you’ll have to pay 7K Glimmer on TOP of the Exotic Shard.

Great opportunity to get that extra damage buff on an already amazing machine gun. The Thunderlord is a great go-to weapon in PvP or during Weeklies when Arc Burn is up, and is one of the best heavy machine guns in the game because it packs a powerful punch as well as retains accuracy.

Essentially it combines everything you’d want to see in this type of weapon: power, speedy reloads, and amazing stability. Plus the Lightning Rounds perk makes the gun become more accurate the longer you fire it. Win-win.

Apart from the Thunderlord, Super Good Advice is Destiny‘s other badass machine gun. It returns missed shots to its clip with the Super Good Advice perk, deals bonus damage every time you kill an enemy, packs a Solar-powered wallop, and can reload amazingly fast.

Buy it. The Monte Carlo is an amazingly tactical weapon that can reap pretty savage combos when used with certain gear. You can team it up with An Insurmountable Skullfort Titan helmet to pretty much trigger Storm Fist over and over, or even tag it up with the No Backup Plans gauntlets to make sure your Force Barrier triggers as often as possible, effectively giving you an overshield.

There are so many possibilities with Monte Carlo’s perks, plus it doubles as an all-in-one mid-range utility firearm great for both PvP and PvE.