The initial images and videos of the worlds first virtual rock opera have showed us a dark and moody futuristic cityscape. Grim and sterile techno metropolis in the veins of Blade Runner, Tron, Nathan Never comics and similar sci-fi themes was merely the first segment as more story parts are being developed by the team.

In the post-war future of NUREN, humanity is controlled and sedated paying the price of peace with sedation. This illusory utopia may appear as a heaven to some but all the work rests on the backs of androids, futuristic slaves with predeterminded roles and destinies. The humans grow complacent, untrobled and unstimulated while the robots do all everything.

The latest android model, created by the CSP Industries, is designed to possess genuine thought and empathy, bringing the emotions back to the world, feeling instead of humans. A sudden malfunction occurs with the newest prototypes QGK and RIX resulting in an unintended human trait self-awareness. Free of the sterile and sedated concepts these androids develop a desire to sing, something that is against everything the new society stands for. They become fugitives with one missions, to bring the joy of music back to the world.

Different art and music teams are working on various NUREN segments combining hand drawn animation and 3D to provide different themes and atmosphere for areas that range from laboratiories to deserts. The new NUREN footage reveals another segment following the metropolis one. It appears to be a harsh wasteland not unlike the one featured in Mad Max or the Fallout series. 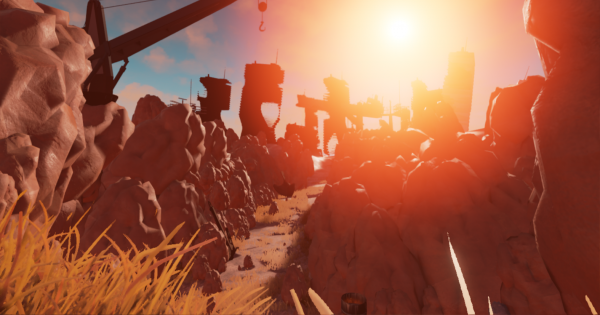 Along with this reveal CSP Industries has created a new NUREN collector’s items that can be obtained with a $50  pledge. These are custom made, heavy metal collectible cards, made from anodized aluminium and feature laser etched image of a chosen character. For those crazy collector types that must have every card or just can’t decide which are their favorite there is a Platinum card collection at $200 pledge tier. It includes all four combinations of red and blue  cards with QGK or RIX and one platinum colored aluminum card. These limited edition items will all have custom art and CSP Industries team signatures.

There will be more NUREN content reveals during these last days of the Kickstarter Campaign.