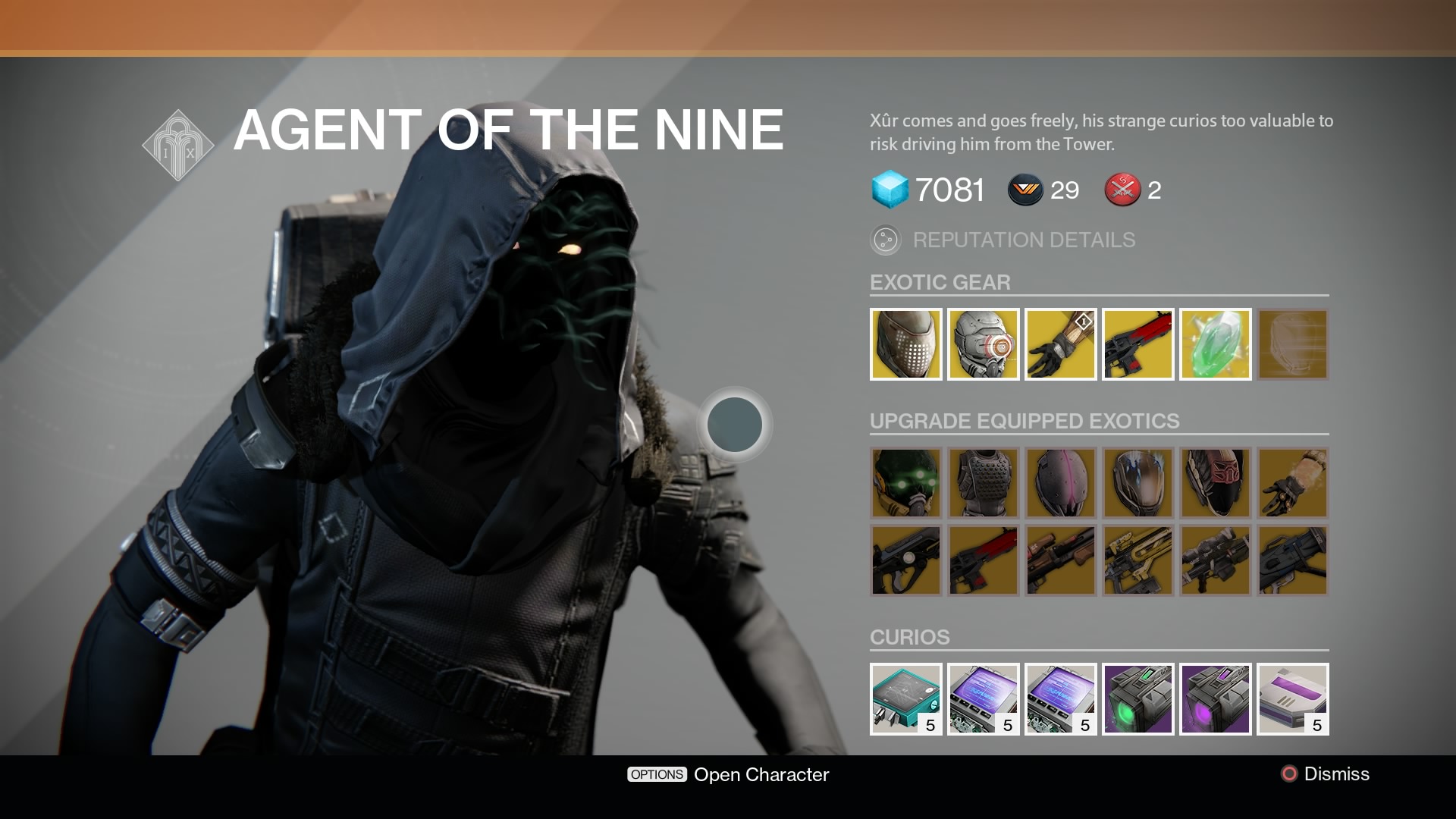 Destiny‘s infamous starbound broker is back again at the Tower for another week of exotic goods, and this time around he’s toting one of the most powerful pulse rifles in the entire universe: the popular (and quite bloody) Red Death.

Other goodies include a decent roll on the efficient Striker-specific Insurmountable Skullfort plus some nifty Claws of Ahamkara for Sunsingers who enjoy spamming Flame Shield as much as possible. As far as upgrades, our shadowy distributor has laid out super impressive stat rolls on both Mask of the Third Man (a Blandedancer’s best friend) and Helm of Saint-14 (a Defender’s best friend) as well as a 160 Intellect max roll on the Lucky Raspberry.

The snazzy Hard Light auto-rifle joins the arsenal of weapon upgrades, accompanied by the Universal Remote, the ultra-stealthy active-camo-inducing Patience and Time sniper , and others.

Plus Xur has ammo syntheses again! Hope this becomes a regular thing–and I can’t be alone on this. 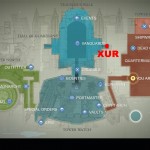 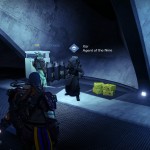 For Week 27 the fleeting vendor can be found downstairs in the Tower, past the Crucible headmasters and right next to the Vanguard handlers. He’s been known to show up here from time to time, and you shouldn’t have any problem finding the purveyor of fine goods.

Without further adieu let’s jump into our analysis of Xur’s exotic wares for 3/13 (Week 27): 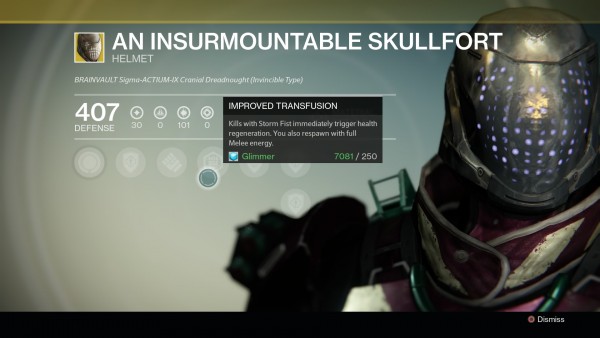 Yes, if you’re a Titan Striker.

First this Insurmountable Skullfort sports a good stat roll at 101 Discipline–it’s not great, but it’s still good. Secondly the helm has uses in both PVP and PVE, which makes a good utility item.

In the Crucible the full Discipline stat helps boost your effectiveness with grenades, and as any Striker worth their salt knows, the Titan’s Lightning Grenade tends to wreck–especially when it’s specced with Aftershocks and used in conjunction with Fists of Havoc’s Aftermath talent.

Spawning with Storm Fist at the ready is already awesome, but you’ll also trigger cooldown reduction of your ultra-powerful Lightning Grenade–and get some health back when you defeat an enemy with your melee attack. Double synergy.

In PVE you’ll get bits of health by picking up orbs which adds a nice insurance policy in the Crota’s End raid. The Improved Transfusion stat is immensely helpful because you’ll also get some HP back when you do Shoulder Charge, too. 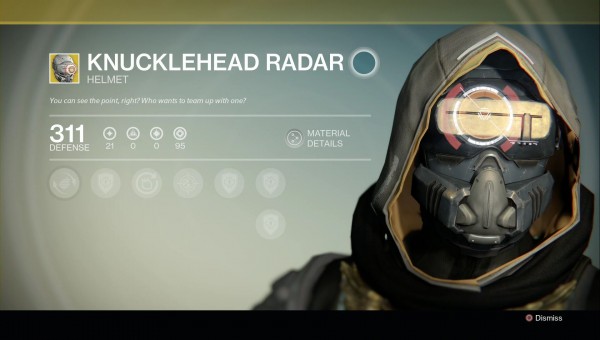 Decent-ish stat roll here, and although the Knucklehead Radar lets you see your radar when scoped into your primary weapon, it’s still a conditional kind of item that doesn’t deliver results like the Gunslinger-specific Achlyophage Symbiote or the Bladedancer’s friend Mask of the Third Man.

It does generate super energy pretty fast when killing Hive, and you can switch your subclasses without losing any specific buffs, so there’s that. Plus the radar effect is super helpful when you’re in PvP and doubly better when you use shotguns and camp around corners, but all in all it seems a kind of so-so item. 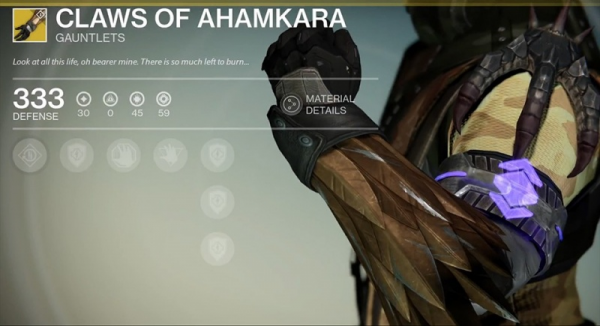 Yes, if you’re a Sunsinger.

Although these gauntlets technically work for both classes, they work best for Sunsingers simply because you can, as users put it “abuse the hell out of the Flame Shield” ability. Basically you get an extra Scorch charge, meaning you get two chances to activate your Flame Shield to protect you in PVP.

The Heart of the Praxic Fire should be your first choice, but these gloves amplify a nice defense measure for Sunsingers, plus you get to reload your shotguns, sniper rifles and fusion rifles faster.

If you’re a Voidwalker, you need to use different exotic gear like the Skull of Dire Ahamkara or the Obsidian Mind instead. 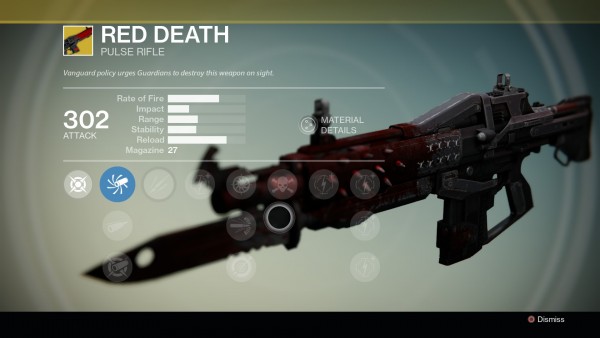 “Vanguard policy urges Guardians to destroy this weapon on sight.”

Yes, yes you should.

Bungie just boosted Pulse Rifle damage and performance with a new update, making the Red Death even more lethal. But what makes it so good?

Basically the gun makes you into a vampire of sorts.

With every successive kill, you get some health and also get a reloading boost, making a kind of destructive synergy that fuels the flow of battle quite well. The Unflinching mod helps with this flow by reducing the annoying flinch that’s incurred when you’re shot, letting you aim much more effectively while under fire.

Because of this the Red Death has been rightfully called the best Pulse Rifle in the entire game.

So aiming is faster, you don’t flinch as much while you’re getting shot while aiming, and you heal and reload faster when you kill someone. Now that everyone is going to have a Red Death in their arsenal, the Crucible is going to be positively ridiculous.

Outside of PVP, the Red Death is a godsend for players trying to tackle the Crota’s End raid on Hard. Since there’s no Chalice, you can now regen life thanks to this helpful pulse rifle, improving the odds quite a bit. 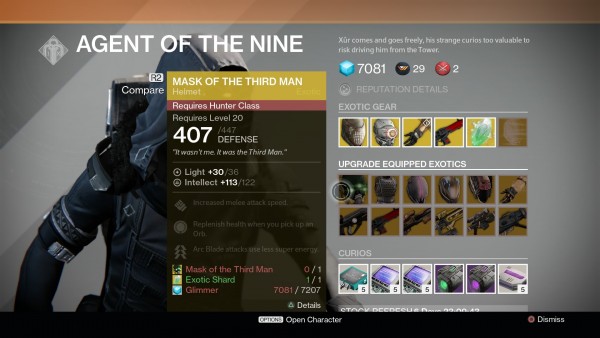 Fantastic stat roll here, so if you need to upgrade your vanilla version now’s the best time to do it. This one is a great choice for Bladedancers who love to cut swathes through enemies with their super attack in PVP, and you’ll even net some extra health from orbs along the way, making it a good PVE helm during raids.

Astounding Intellect stat roll here, so upgrade it if you can. The Lucky Raspberry is a very useful tool that arms you with more rocket and fusion rifle ammo (works with Vex Mythoclast) for PVE raids. Plus you instantly spawn with full grenade energy in PVP. Plus your Arc-infused grenade’s chain lightning effect stretches further outward, making it a good PVP finisher.

If you happen to be a Defender Titan and don’t have this one upgraded, you need to do so asap. The max 124 Intellect is very high, plus you get that snazzy defense boost to boot. This particular helmet is a must-have for all Defenders, which pretty much makes their bubble shields into offensive weapons that are useful in all modes of play.

Low Strength roll here, and you always want to wait until you see a great stat roll before you upgrade, considering it’s going to cost you 7.4K Glimmer as well as an Exotic Shard. Either way this particular helm is a superb choice for Strikers who want to unleash as much havoc as they can with their super attack, making it an advantageous bit of armor for PvP.

I’d still hold off for a better stat roll though.

Stellar max Strength roll here, and Light Beyond Nemesis is a good helm to use when you’re on a raid. It’s a very conditional sort of item so I don’t think you need to upgrade unless your current version has low stats or if you really want the extra defense.

Low Intellect stat roll, and the odds are your pair have better numbers, pass it up for now. The Sunbreakers are great for the Sunsinger class, making your solar grenades last longer, and can be paired up with the Pocket Infinity to do some serious damage in PvP. 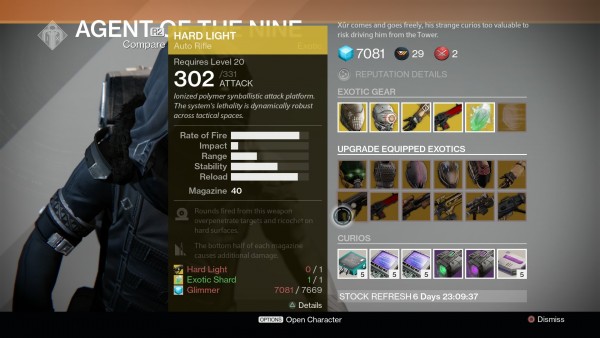 Good chance to upgrade here, as we hardly ever see this gun in Xur’s inventory. The Hard Light rifle is noted for its high-capacity magazine with 40 rounds at a high rate of fire, making it a great solution for crowd control. Sadly it was hit hard by Bungie’s recent auto rifle nerfs in the 1.1.1 update.

Really no need to buy this one considering Xur is selling an upgraded version for coin. If you don’t happen to have the 25 Strange Coins to pick it up the other way, you can go this route–either way you’ll be getting an upgraded and clean gun that’s noted as the best pulse rifle in the entire game–and for good reason.

Even if you absolutely love shotguns, this really isn’t worth upgrading. Sure you’ll get the extra damage boost, but chances are if you love shotguns, you’ve already heavily invested in upgrading and filling out the gun’s mods. Stick with your old outdated shotty and focus on maxing out some primaries or picking up powerful gear.

Another great upgrade for an already impressive gun. The Plan C is one of my favorite weapons simply because it’s so dependable in just about any situation, and it completely wrecks when Arc Burn is active. It fires very fast and has a superlative charge rate, which is pretty much the bane of fusion rifles everywhere. That damage boost is worth the upgrade, even if you’ve maxed your version out.

Pass this by. Truth has some interesting mods, and it can help in Nightfall when Void Burn is active, but you really don’t need the extra damage so much. Focus instead on your primary weapons and gear, as mentioned above. 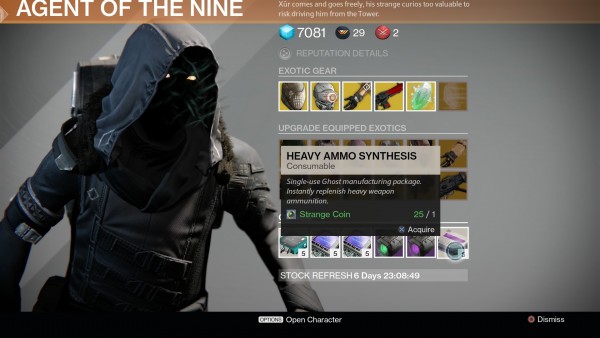