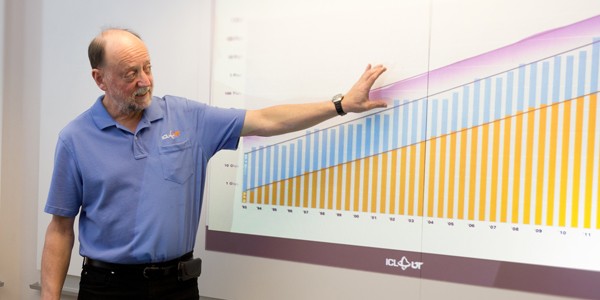 Supercomputing Frontiers 2015 kicks off March 17 in Singapore and computer scientist Jack Dongarra is set to deliver one of the opening keynotes for the event, titled Current Trends in Parallel Numerical Computing and Challenges for the Future.

Dongarra is well known within academic and commercial high performance computing circles within the United States and around the world.

Dongarra did not start his academic career with the intention of numbering among the foremost supercomputer experts and innovators. Enrolling in Chicago State University in the 1960s, Dongarra majored in mathematics which he intended to teach as a subject.

But Dongarra’s career objectives soon changed after he learned about a brilliant machine that took the human error and tedium out of math altogether: the digital computer. While it was still emerging at the time as a proper tool for academia, Dongarra quickly found that 16 x 16 matrices were much harder to solve by hand than with a machine, which could do them effortlessly.
Dongarra became so proficient at programming the computer to do math problems, that he eventually changed his pursuit from mathematics to computing, and went on to get a masters in Computer Science at the Illionois Institute of Technology.

Math and computers were a harmonious mix, and at the prestigious Argonne national lab, Dongarra worked with a group to develop a software library based on the algorithms of computer scientist James Wilkinson, and the result was EISPACK, a highly influential library of matrix solving routines. Funded by the U.S Department of Defense, Dongarra went on to develop LINPACK, a similar library for numerical algebra.

Linpack went on to become a de facto benchmark for computing power, and in 1993, Dongarra began compiling the TOP500 list, which remains the most influential authority on rankings of supercomputers around the world.

Dongarra currently lives in Oak Ridge Tennessee, near the Oak Ridge National Laboratory where he works as a researcher. ORNL is home to Jaguar, the world’s second fastest supercomputer. Dongarra is also a Distinguished Professor in the Department of Electrical Engineering and Computer Science at the University of Tennessee, and director of UT’s Innovative Computing Laboratory.

In the last decade, Dongarra has continued to focus on supercomputers, and more specifically, the future of exascale computing. In 2013, Dongarra received a $1 million dollar grant from the Department of Defense to work on the problem of scaling supercomputers to 1,000+ petaflops of strength.

Seeing the project as vitally important to the understanding and management of weather, climate, and other natural systems, Dongarra has worked to overcome the limitations on traditional computing which prevent them from breaking the 1,000 petaflop barrier.

While exascale computers are not yet possible, that hasn’t stopped Dongarra from planning for the future, and part of his efforts include the Parallel Runtime Scheduling and Execution Controller, or PaRSEC, a project aimed at developing algorithms and solutions to manage exascale computers when they arrive.

The expert that experts consult, arguably nobody is better qualified for the task. After receiving the Association for Computing Machinery (ACM)-Institute for Electrical and Electronics Engineers (IEEE) Computer Society Ken Kennedy Award in 2013, widely renowned “father of the Internet” Vint Cerf said of Dongarra “his innovations have contributed immensely to the steep growth of high-performance computing and its ability to illuminate a wide range of scientific questions facing our society.”

Wayne Davis, dean of the college of Engineering at The University of Tennessee remarked “it is hard to imagine what would have not been discovered without [Dongarra’s] work.”