Disclaimer: A digital PS4 copy of the game was provided by the publisher for the DmC Definitive Edition review.

Ninja Theory’s DmC: Definitive Edition might be the most purely fun PlayStation 4 game I’ve played so far simply because it doesn’t try to be anything other than a good Devil May Cry game.

It’s not pretentious, it doesn’t try to bore you with a winding story arc, nor does it push new mechanics onto the player: it sticks to its original guns by harking back to the authentic and stylish dark mayhem that built the franchise.

The hack-and-slash action is made all the more riotous thanks to the new 60 frames-per-second update, which assures every combo is supercharged with lightning-fast responsiveness.

Every second matters in games like these, and with this upgraded port, players are able to make use of every extra millisecond to wreak total chaos with Dante’s devilish powers.

Although the game is a straightforward remaster in terms of content, it does toss in a nice handful of extras to make the meal all the more enticing.

Other additions include being able to customize how Dante looks during the campaign–particularly useful if you really hate Dante’s new appearance–along with an incredibly fun Turbo Mode that doubles the game’s speed.

If you’re a hardcore combo-stringer that’s looking for a serious challenge, the Definitive Edition has you covered with no less than five new difficulty modes like Gods Must Die or the uber relentless Hell and Hell mode, which makes Dante die from a single hit.

One of the more significant additions is the ultra-survival Bloody Palace mode that’s unlocked when you beat the game. In this timed high-score mode you’re swarmed by endless waves of enemies who are hellbent on annihilating you from existence. The Bloody Palace can be played as either Vergil or Dante, and serves as an excellent way to refine your stylish combo-building skills.

Ninja Theory’s prequel has a pretty strong story that seamlessly delves into the origins of Dante and Vergil, tying in a nice webwork of myth and demonology into the mix as well.

It turns out that Dante is a nephalim–that is part demon and angel–and is the fruits of the union between his father, a demon named Sparda, and his mother, the angelic Eve. Their union broke immortal mandates and both Eve and Sparda were sentenced harshly, but Dante and his brother Vergil were freed.

Being a nephalim has all kinds of advantages, and they manifest quite creatively within the game. As a devil-hunter Dante can cross-over to Limbo, a kind of vibrant and colorful bizarro-universe where nasty demons and corrupt chaos reigns supreme, as well as wield weapons infused with demonic and angelic power.

Combat is elegant, fluid and incredibly stylish. Every combo is enthralling and empowers you to really feel your role as a devil-hunter and develop your ass-kicking prowess along the way.

The real beauty of combat is how dynamism of the attacks ensure you can make your own customized combos, pretty much letting you string together a near-infinite flurry of explosive chaos the way you see fit. Being able to define your own style has always been a hallmark of the series and its in full force in the DmC: Definitive Collection.

Dante has quite a varied arsenal this time around that makes every single battle much more layered and tactically strategic.

Since Dante is a nephalim, he has angelic and demonic weapons that can be switched on the fly by holding LT and RT respectively. Each set has its own unique set of abilities and moves, plus you’ll have to mix and match to take out certain enemies like the harpy, whose shields are weak against angelic attacks.

Angelic weapons include the sweeping scythe Osiris and the dual-wielding Aquila, which can be thrown at a distance or used to slice and dice weaker baddies. The trick is you can only have one angelic item equipped at a time, but you can switch between these on the fly

The other half consists of demon-powered tools like the fiery fists of Eryx (super useful for uppercutting and launching enemies in the air) and the powerful slow Arbiter axe that takes whole chunks out of demons’ life bars.

Dante’s immortally iconic Rebellion sword and Ebony and Ivory handguns are in the mix too, making for an expansive arsenal that can be tapped to deal with a wide variety of situations and bosses.

To me, the best part about combat is how Dante can use his devil or angel chains to yank enemies forward for some punishing destruction, or to sling across levels like an inter-dimensional Spider-Man.

With the chains you can dish out severe havoc on a baddie, fling them away with a crushing blow, and then just pull them right back for more pain. This is essential for chaining together those stylish combos and serves as a major advantage against certain enemies like the hulking Tyrant.

Having so many weapons and abilities might sound like too much to handle, but Ninja Theory remedies this with their amazingly balanced control scheme, making sure you never get overwhelmed.

Gameplay is masterfully paced in such a way you’re not too strong or too weak at any given time. Also the better you perform in-game–high combo strings, finding collectibles, etc–determines your overall grade, netting you extra skill points and the like.

The real beauty behind the game’s pacing formula is that it creates a distinct sense of accomplishment after ever level, dishing out tangible rewards and practical bonuses along the way.

Dante still racks up red orbs to spend at angel statues for helpful items to restore health, boost his Devil Trigger super, or even revive him once he’s been slain–but the progression ins’t just about orbs and items, it also perfectly punctuates boss fights and level completion by granting a brand new weapon.

DmC‘s bosses are exceptionally creative and deserve a nod, too.

From the grotesque foul-mouthed succubus that taints the world’s favorite Coca-Cola-like soft-drink with nasty chemicals to Raptor News’ Bob Bargas that attacks players as a giant digital head, the bosses are amazingly fun and provide a nice throwback to those methodical battles of old.

Something has to be said about the game’s amazingly bizarre world of Limbo, which manifests as a literal playground for demon overlords. There’s a distinct sense of otherworldly chaos pulsing within the heart of this dimensional rift, and it’s not the dark, blood-red universe we’ve seen before.

Instead Limbo is represented as a quite colorful and eerily beautiful sort of acid-trip with a true sense of artistic flair, providing a feast for the eyes at every turn. Vergil’s Downfall taps the mystical eldritch style of the between-world quite well, showcasing a universe that tethers the very fabric of reality within its scintillating colors.

Conclusion: The Devil You Know 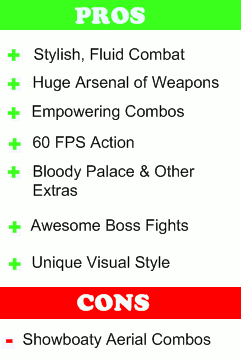 With the DmC: Definitive Edition, Ninja Theory has refined the game’s rough edges and creating a shining example of what all remasters should be. Tossing in a bunch of extra DLC and modes is a must, but the real substance lies with the new frame rate enhancements that make every millisecond count even further.

This is the type of game you can extensively replay over and over again even after you beat it simply because of it’s proven fun-inducing formula.

Every moment spent in Dante’s stylish boots is enjoyable, and it’s a game that goes exceedingly well when complimented by other styles in a game library, providing an excellent foray when you’re in the mood for something stylish and chaotic.

Capcom’s DmC re-release is a perfect fit for long-time Devil May Cry fans and new players alike, melding everything that made the franchise so damned addictive with a fresh new storyline and a huge armament of stylish weapons.