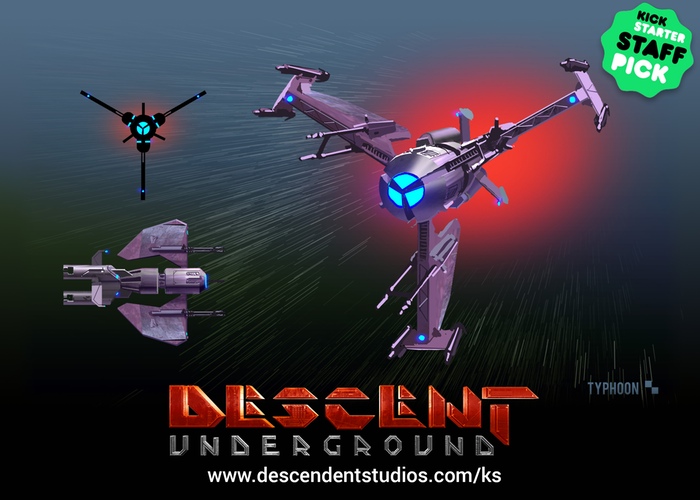 Eric “Wingman” Peterson and crew at Descendent Studios have been pretty darn busy building content for its 6 axis of freedom game Descent Underground.

The developers have released new level design test footage. Bear in mind this is very early work and more polish will be added with time.  Still, it is most impressive for such a small but talented team.

Looking back at Descent

Back in 1994, the FPS genre was a very two-dimensional place, literally! Games like Wolfenstein 3D and Doom were 2D sprite-based games played, for the most part, on flat 3D maps, jumping wasn’t even an option! When Descent released it literally changed the playing field bringing with it fully rendered 3D players and enemies and abandoning flat, linear maps for twisting, turning subterranean levels featuring full six degrees of freedom of movement.

Descent placed players at the controls of their very own spaceship as the Material Defender, a mercenary hired by the Post Terran Mining Corporation to combat the company’s mining robots which have been infected by a mysterious computer virus. Players fought their way throughout the solar system until finally reaching the source of the computer virus and vanquishing the boss.

Upon release, Descent was critically acclaimed, lauded for its innovative gameplay where players flew with no regard for up and down, thoroughly lost through full 3D environments. The game spawned two sequels, the spinoff series Descent: Freespace, a trilogy of novels, and countless ‘clones’.

For years the masses of Descent fans yearned for a modern sequel. That time has come. Descent is back in the form of a Kickstarter project. Descendant Studios is shooting for a goal of $600,000. Currently they are near $260,000 or over 43% of the goal. With 18 days remaining they have a very good shot at hitting the goal. Most Kickstarter donations occur at the first few and last few days.

By Austin Craig and Jon Bartus

View all articles by Austin Craig and Jon Bartus