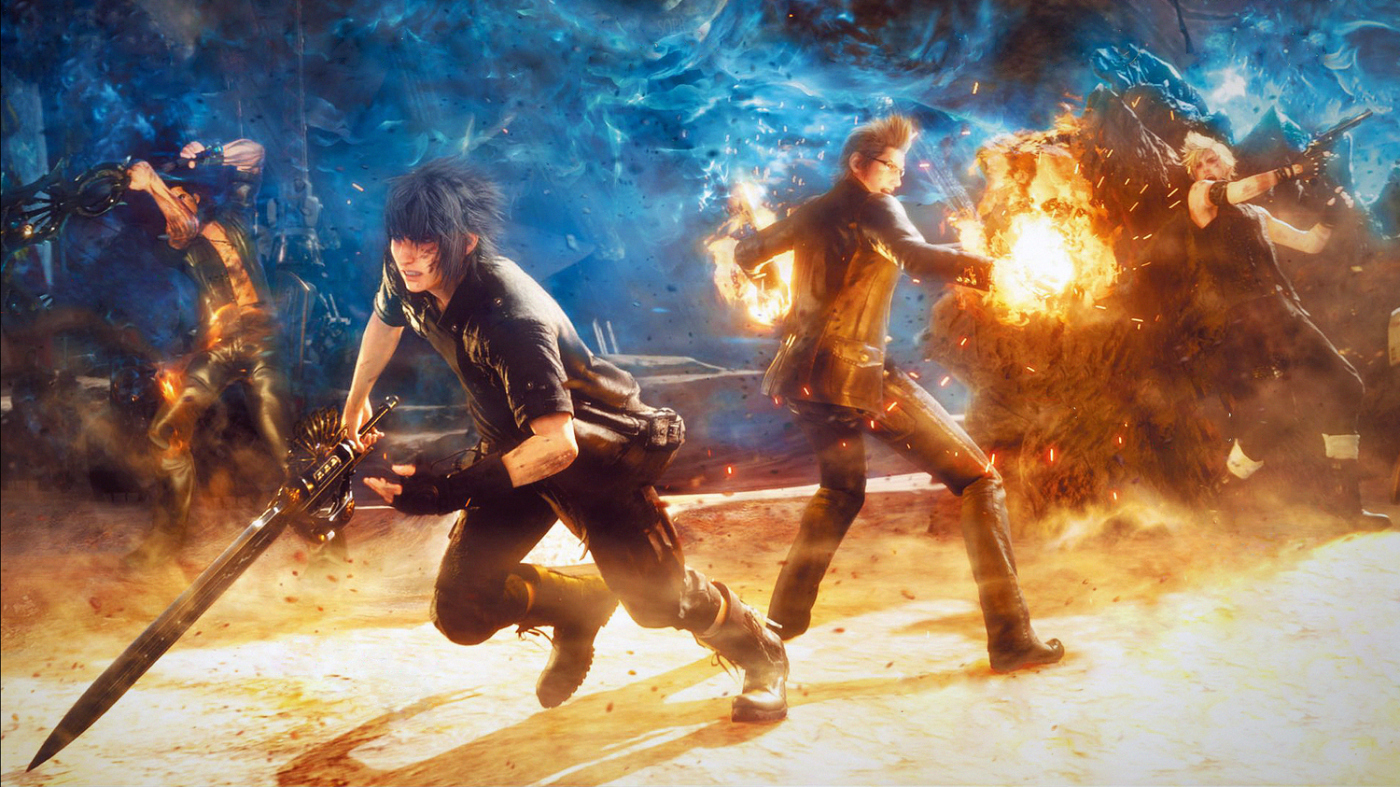 For the first time in nearly a decade we get to experience the action-oriented combat that the game has to offer, set in an amazing-looking backdrop filled with whimsy and wonder.

We’ve played a good portion of demo itself and chronicled our adventures within Duscae. detailing the basics while underlining the toils and troubles we had along the way. So without further adieu, let’s jump right in! Campfires, male bonding, and epic battles await! 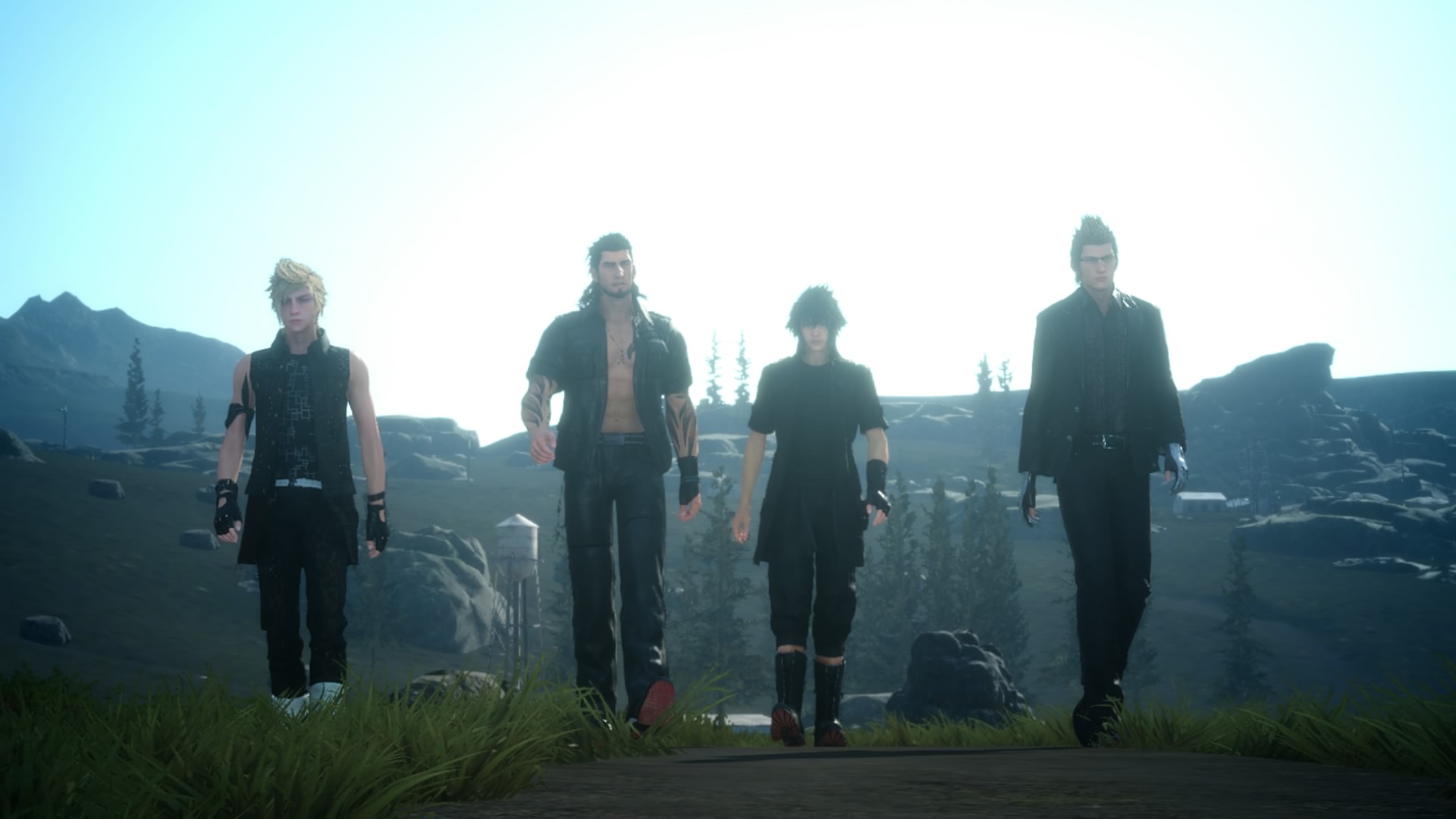 The fighting sequences in Final Fantasy XV are seamless within the open-world itself, so there’s no battle transitions that lock players into smaller environments like the old-school games. Combat is action-oriented, but it’s not as fluid as, say, Devil May Cry games where you can get away with button-mashing.

That being said you can auto-attack by holding down Square, but you’re going to have to pay attention go what’s going on around you in order to keep out of danger.

The combos in Episode Duscae aren’t your traditional button sequences. Although you do have different moves, they’re not really strung together so much as separately sequenced out. And the game doesn’t really explain how to execute the various types of attacks.

There’s also a Defensive stance that’s activated by holding L1. You can dodge attacks as well as parry while in this stance, and if you hit Square after parrying, you’ll deliver a devastating counterattack.

You can even cross-parry and cross-counter against two enemies at once.

Essentially you get a number of different attacks like Ravage, Vanquish, Crush, Counter and Descend, but you have to experiment to see how to actually do them in battle.

Once you enact a specific attack like Counter, which is activated when you subsequently land a blow after dodging, the battle status menu will briefly show the attack you just executed. 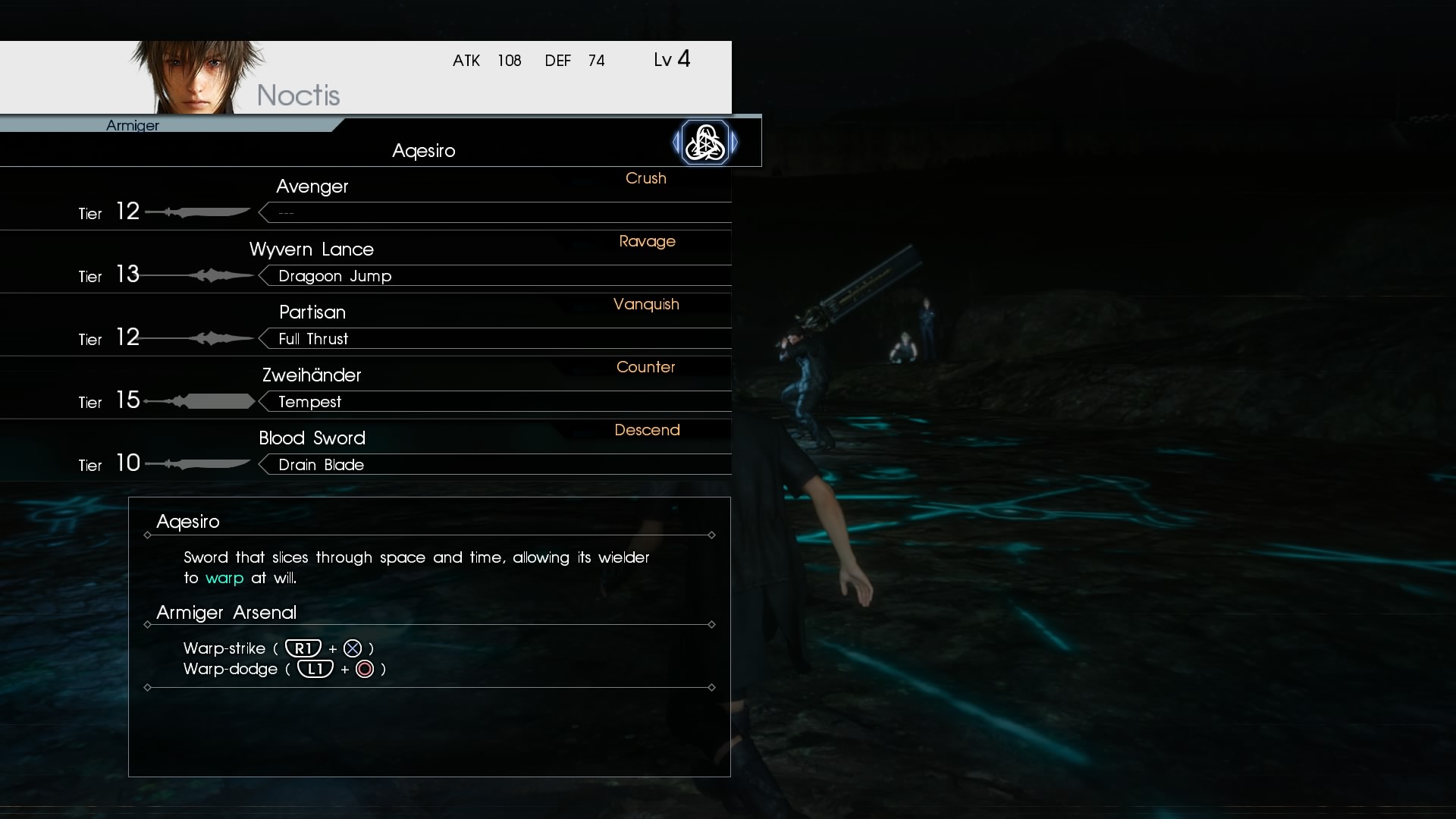 Noctis has a nice array of weapons that can be mixed and matched in various ways to provide some impressive customized strategic advantage.

Remember those different attack types? Well they’re actually sort of “slots” that weapons can be assigned to. The way it works is that you can, at any time, assign any of the five weapons listed below to the battle stances.

Let’s say you have the Zweihander set in your Descent slot. This means every time you jump attack, you’ll slam down the heavy two-hander that negates defense and has quite a decent range. Also personally I like having my Blood Sword set in my Counter slot so I regain mana every time I dodge-slash.

This setup is quite tactically sound, making for an impressive array of strategem for every single battle, and you can change your loadout at any time and adapt to different enemies.

Plus every weapon has its own unique Technique attack that acts like a sort of special ability, but they tend to drain MP so you’ll want to use them sparingly.

Setting up your weapons to your attack slots is only half of the battle, and the actual combat proper is actually rather…awkward. It’s very much unlike anything we’ve seen in the series to date, despite the fact that it’s action-based like Final Fantasy Type-0.

Final Fantasy XV‘s combat requires a steep learning curve, and to get it just right you’ll have to practice a bit. The real problem is the game’s awkward targeting system which gets kind of crazy when you’re fighting a big group of baddies.

At one point I was fighting a pack of sabertusks when all of a sudden a sortie of magitek troopers dropped in from the night sky. That’s when things started to get out of hand.

The game’s combat system seems like it was built upon 1vs1 style fights, as Noctis can only target one enemy at a time. The key to taking on groups, though, is to switch targets and whittle away HP here and there while trying to focus taking out baddies one at a time.

When you’re fighting a group you’ll need to pay attention to what’s going on around you. You can’t have tunnel vision and fight only one target, you’re going to have to switch targets quite often, dodge, and even warp to higher ground or hide to regenerate MP. 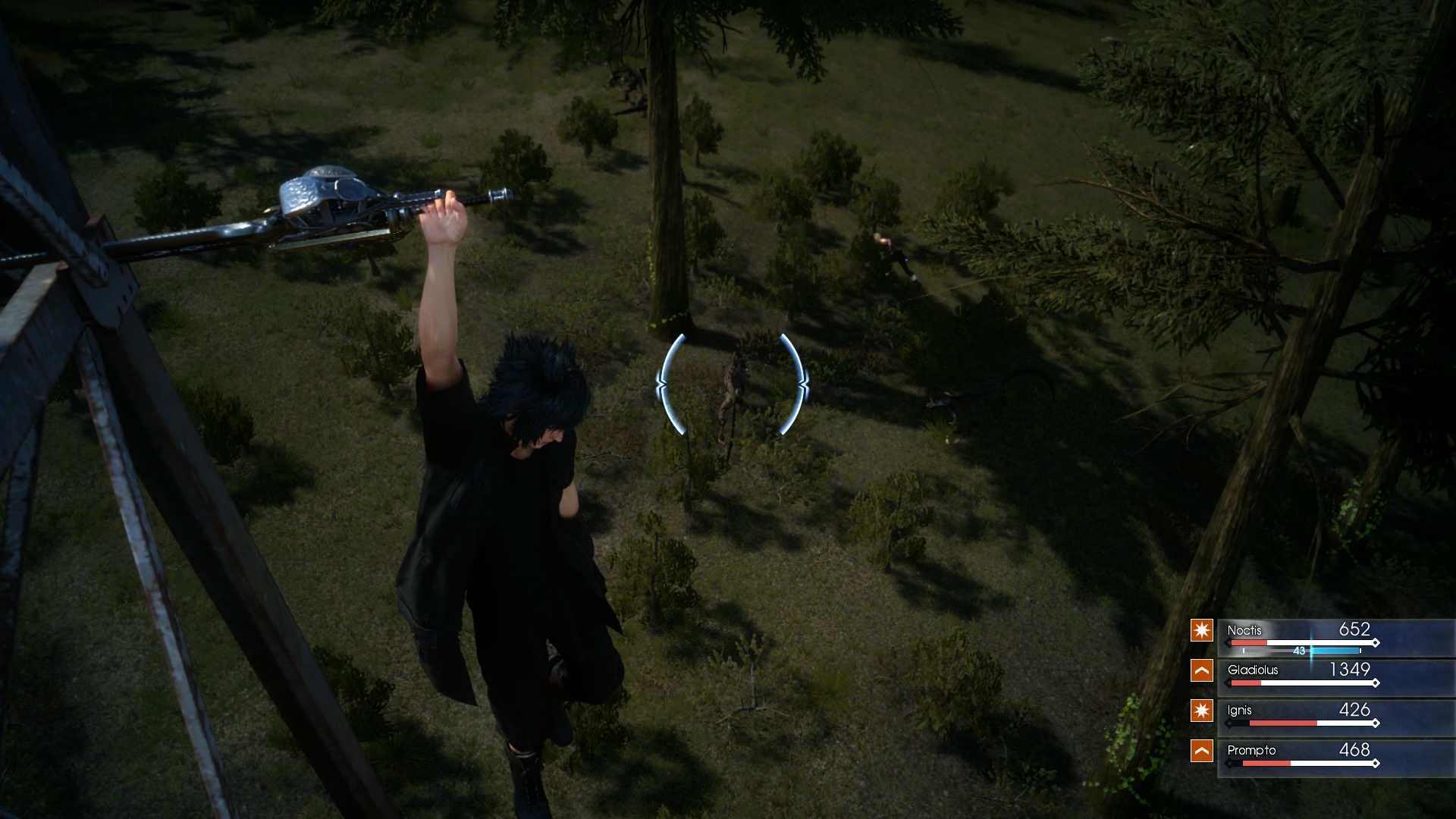 Warping to higher ground is a great way to regenerate MP, which is a significant resource in FF15.

MP is extremely important in Final Fantasy XV, and if you run out, you go into a sort of “staggered” state called Stasis. While in Stasis you can’t use your warp ability, you can’t dodge, nor can you cast techniques.

Dodging is one of the most important things you can do in the game, and you’ll be doing it a lot, but you can’t do it too much, because dodging actually takes MP. That’s right, you need MP in order to dodge.

The only ways to regenerate your MP in battle is to use Noctis’ warp ability to zap to a metal tower, hang there, and replenish your magical energy, or you can hide behind rocks, trees and other outcroppings.

This hinders that fluid, action-packed feel quite a bit, but it also does something quite important and forces players to pay attention and carefully weigh their choices in battle. You can’t just spam Dragoon Jumps or dodge every attack, and like or not you’re going to take a few hits here and there.

So what happens when you get overrun and wiped out?

The neat thing about FF15 is that you don’t “die” when your HP runs out. When you’re knocked out you can still move around–you go into a “Danger” state that’s akin to the Stagger state–and there’s a secondary health bar that can be depleted before you’re K.O.’ed.

When you’re in the Danger state one of your teammates can jump in and Rescue you, and you can always do the same for them, basically adding another level of depth to combat.