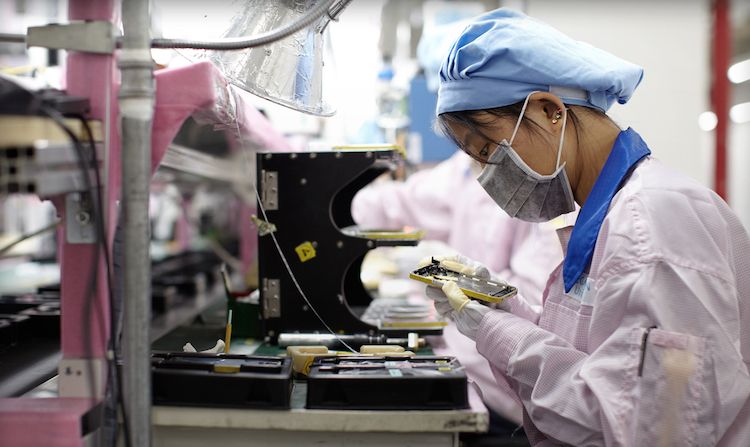 On March 23 Pegatron (TPE: 4938) reported its yearly earnings which were double-digit gains over last year.

Pegatron, which shared responsibility for assembling the iPhone 6 with Hon Hai Precision Industry (TPE:2317), reported a 53.4% jump in profit year-over-year to $466.8 million. An earnings guidance recently released by Hon Hai shows that the company also expects a double-digit profit increase (it will report its earnings when the market closes on March 30).

But both Pegatron and Hon Hai (the parent company of Foxconn) — which compete in some sense — have an underlying problem: the double-digit growth that they have become accustomed to is based on the success of Apple (NASDAQ: APPL) products. Both companies have other lucrative contracts with other vendors, but no other vendor orders the sheer volume that Apple does.

Pegatron’s CEO acknowledges this. When Pegatron reported its earnings earlier this week it acknowledged that nearly 60% of its revenue came from Apple.

“It’s definitely not a good thing to be too concentrated on just a few clients. But you can’t avoid the fact that mobile phones have been fast sellers,” Chief Executive Jason Cheng is quoted as saying. “When good business comes your way, how can you not take it?”

Hon Hai was in a similar situation until last year, and has taken some steps to reduce its dependence on Apple. In 2012, 40% of Hon Hai’s revenue came from Apple as it had the sole responsibility to manufacture the iPhone 5 and the iPhone 5s.

Since then Hon Hai has acquired controlling shares in Taiwan’s Asia Pacific Telecom (TPE: 3682) and has made plays to expand into automotive. In late December it had publicly announced it had taken a 10.5% in China Harmony (HKG:3836), a major luxury car dealer in China. Recently it announced that it was partnering with Tencent (HKG:0700) to build electric vehicles that were connected to the Internet of Things. It says it can build electric vehicles for under $15,000 — a significant discount when compared to current models from major manufacturers.

Hon Hai hasn’t publicly stated how much of its overall revenue Apple accounted for, but it’s believed to be in the 25-30% range.

What can Pegatron do?

Hon Hai’s plans to diversify into electric vehicles is very ambitious, and comes at exactly the right time. Choked by smog, China is incentivizing the research and development and production of electric vehicles. Hon Hai already has considerable manufacturing infrastructure in China’s Guangdong province and in Taiwan, and the governments of both countries would be happy to provide subsidies to incentivize scaling up production and creating a supply chain.

But Pegatron lacks the scale of Hon Hai and cannot as easily scale and shift its manufacturing capacity. Instead, Pegatron should adopt just one of Hon Hai’s strategies and invest in allied firms in the same industry. Pegatron could make investments into mobile telecoms, and even finance companies: these are two things that would assist it in becoming a major IoT player. There are also dozens of wearables firms in Taiwan that Pegatron could take a stake in.

Apple will always make up a considerable amount of Hon Hai’s and Pegatron’s revenue. But both companies can become less dependent on Apple through a few smart investments.