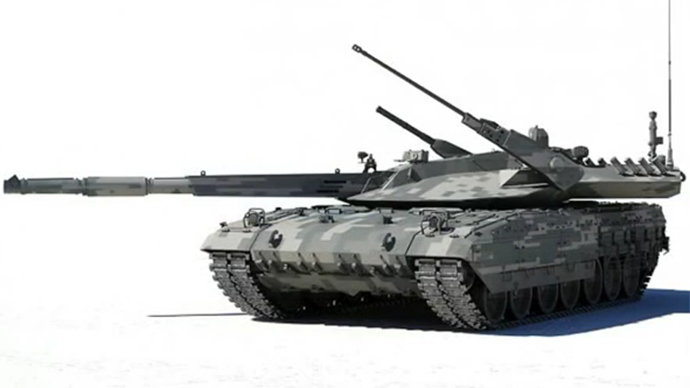 Plenty of rumors have been floating around the T-14 Armata, Russia’s new main battle tank design. Overall, the tank should be a completely new platform. It will also be a first new one since the introduction of the T-72 and also a completely new approach to tank design by the Russian military.

Earlier today, a video surfaced showcasing what is possibly the  new tank. With the Armata scheduled to make its first public appearance at the May 9th Victory Parade, this might be the first look of this vehicle afforded to the general public worldwide.

The tank looks utterly modern. It features seven road wheels last seen on the now defunct Black Eagle tank prototype of the past. The tank also features a turret bustle. This is probably casing the tanks main ammo. While this may be a big step forward in terms of crew safety for the Russian military, it also means the tank will be longer as well.

Russian tanks have a bad habit of cooking off when hit by anti tank weapons. This means that when a tank is hit, the ammunition and propellant store inside the tank and the autoloader would cook off due to the immense heat or simply being pierced by the melting metal from Armour-piercing discarding sabot (APDS) or similar ammo penetrating the inside of the tank. With a turret bustle (found on many contemporary western tanks like the M1A1 Abrams) the ammunition is stored in a safe compartment in the rear of the tank. This removes any high-explosive contents sans the round in the gun from inside of the actual interior of the tanks themselves.

Overall, the tank seen in this video is longer than contemporary Russian designs, warranting the probability rectifying any past issues with the tanks like the T-72 in service with the Russian military. This tank is also seen without the sideskirts and any ERA modules, as it is either tested or prepared for transportation.

The video above was probably shot at the location of the Uralvagonzavod factory. This is a road where tanks are taken for testing and/or transportation, so you might want to check out the Google Streetview showcase of it.

Russian military announced that the Armata would make its public debut at the Victory Day parade alongside some other, high-profile and profoundly interesting pieces of brand new military tech. In the past few years, the Russian military embarked on a high-spending path of modernizing their forces that has resulted in a complete overhaul of their ground, air and naval forces in certain aspects, creating a renewed threat to the Western nations and their military capabilities. The introduction of a new tank, self propelled guns, airplanes and combat navy ships is scheduled to be completed, adding a much better punch to the Russians overall.

The “Armata” Universal Combat Platform is a Russian prototype of an advanced next generation heavy military tracked vehicle platform. It is, in reality, a basis for a a main battle tank, a heavy infantry fighting vehicle, a combat engineering vehicle, an armoured recovery vehicle, a heavy armoured personnel carrier, a tank support combat vehicle and several types of self-propelled artillery under the same codename based on the same chassis. It should also provide the basis for for artillery, anti air-craft defense systems and NBC defense systems.