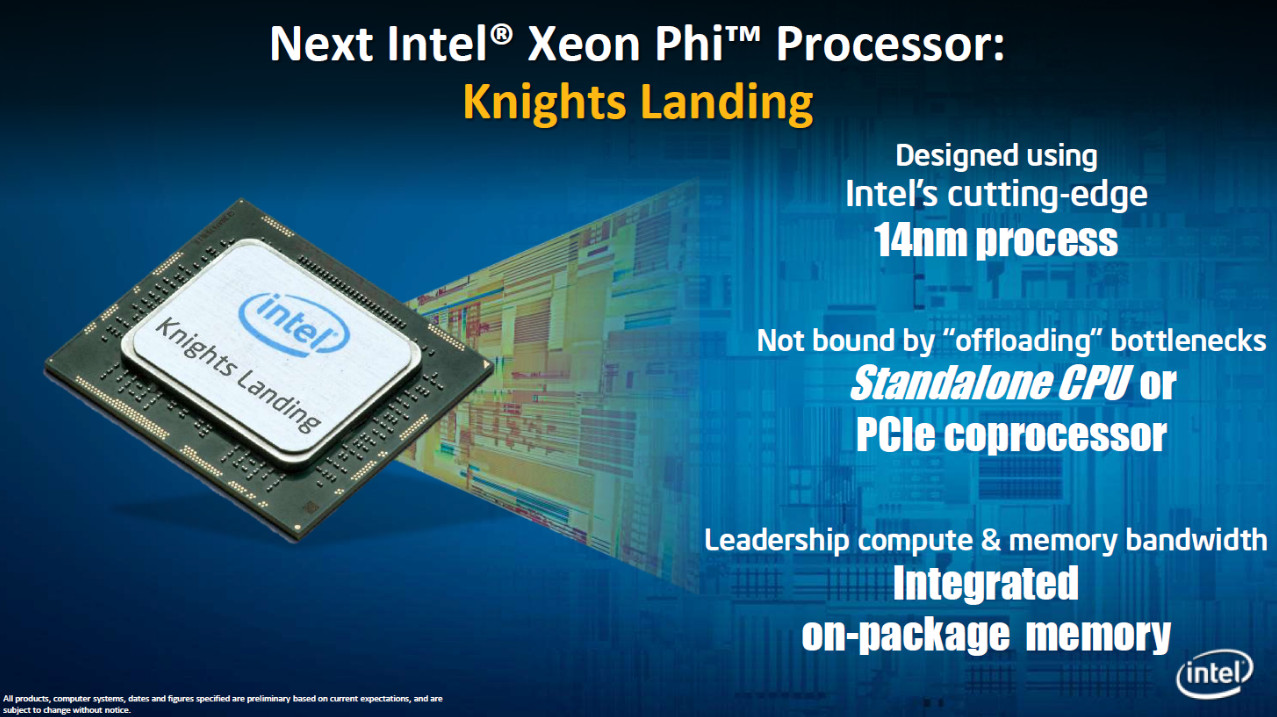 The processor features several technical achievements, starting with a 14nm manufacturing process, which is a first in this series. Designed to offer high-performance computing, Knights Landing differs from other server-based CPUs in that it uses lots of low-energy cores to run parallel tasks, whereas offerings from IBM (NYSE:IBM) or Oracle (NYSE:ORCL) use fewer but more powerful cores.

Built on Intel’s MIC (Many Integrated Core) architecture with a total of 8 billion transistors, Knights Landing runs a modified version of the Atom Silvermont x86 core in a tile configuration, with a single tile featuring two cores and vector execution units along with shared L2 cache as well as a circuitry that connects the tile to the rest of the mesh network. Intel has mentioned that each Knights Landing package would include a processor with 30 or more tiles and eight on-chip memory modules. Another major highlight with Knights Landing is that it would be able to function as a host processor, meaning that it can boot and run x86 operating systems and application code without any need for recompilation. It can also act as a co-processor.

Talking about memory, the chip vendor has announced that Knights Landing would feature eight 2GB stacks of memory, totaling up to 16GB. The chip is manufactured at Micron, and looks to be a variant of the manufacturer’s Hybrid Memory Cube, which involves stacking memory and using an embedded logic chip to deliver higher bandwidth at a lower power. Micron has mentioned that its HMC modules will be able to transfer data 15 times faster than a standard DDR3 module, while utilizing 70% less energy. Along with on-chip memory, Knights Landing will come with six memory channels that can connect a total of 384GB DDR4 memory.

The result of the new manufacturing process, core design and memory is that Knights Landing will offer three times the performance as the current-gen Knights Corner, with Intel claiming 3 teraflops double-precision and 6 teraflops single-precision performance. That number is close to the 7 teraflops figure Nvidia (NASDAQ:INTC) touted during the launch of its latest video card, the Titan X.

It is no wonder, then, that Intel is aiming for the same use-cases as Nvidia for Knights Landing, with the chip vendor stating that the CPU can be used for deep learning and data analytics. Nvidia, however, has invested significant resources in its platform, and is offering tools such as the Digits software framework. Even if Intel does not manage to successfully challenge Nvidia in the Knights Landing, it is witnessing a great amount of demand, with over 50 companies set to sell server systems with the CPU as the host.