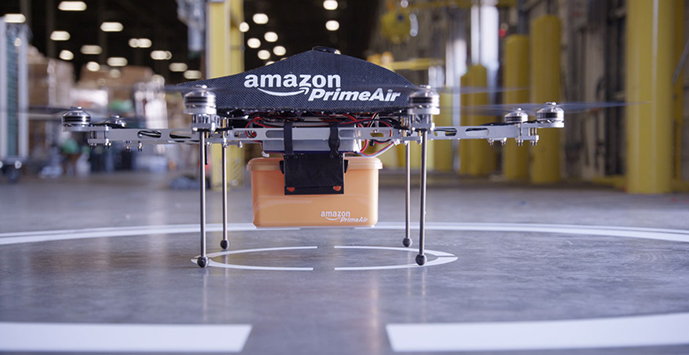 Amazon (NASDAQ: AMZN) is confident that one day it will offer a delivery service by air even if its has to convince hostile regulators and a skeptical otherwise. In order to prove that its Prime Air service will one day be possible, Amazon is currently testing its courier drones in a British Columbia, Canada border town to eventually demonstrate to US authorities that the technology is viable.

According to a Guardian feature on the test site, Amazon engineers are conducting experiments with the drones to make sure that they can operate safely and autonomously. Amazon proposes that these drones operate between 200-500 feet and carry packages up to 5 lbs. The drones will have collision avoidance features, and will be able to operate without a direct link to its base. These critical features need to have every bug ironed out before Amazon appeals to the FAA to get the green light to fly.

“We think that this new technology will provide huge benefits for our customers, who we think will love it, and for society more broadly,” Amazon’s Paul Misener, the company’s vice-president for global public policy, told the Guardian. “Why would we wait?”

While the FAA should have granted Amazon a license to perform testing in isolated, rural areas its concerns about the safety of wide scale drone delivery are valid. There are simply too many things that could go wrong to have the skies above a major city filled with autonomous drones. Each drone would have to have redundant mechanical and software systems to ensure that an engine failure or software malfunction doesn’t mean that it would drop from the sky.

There is also the problem of range. A high-end consumer drone, such as the DJI Phantom, only lasts for 25 minutes in the sky with its 5200 mAh battery. Given current battery technology that’s affordable, drone manufacturers have a dilemma: batteries with a higher milliampere-hour and voltage to let the drone fly faster and longer are heavier, which require more energy to get off the ground. Bearing big jumps in battery or engine efficiency, don’t expect drones to go much further than this on one charge.

In many US cities, famous for their urban sprawl, 25 minutes is simply not enough for a return trip. In order for this to be viable, Amazon would have to build small warehouses throughout the cities and use predictive algorithms to stock them accordingly.

All this considered, wouldn’t it be more efficient to just deliver product by truck?