Square Enix’s not-so-mysterious teaser has been cracked, and to no one’s surprise, a new Star Ocean game is on its way.

Star Ocean 5: Integrity and Faithlessness is the name of the title, and it’s currently planned for a release on PS3 and PS4. Tri-Ace will be returning to helm development.

So far we don’t have a finalized release date yet, but Gematsu reports that battle sequences will be action-oriented in real-time rather than turn-based events. Combat will revolve around combo-based attacks, and players will execute different strikes depending on enemy proximity. 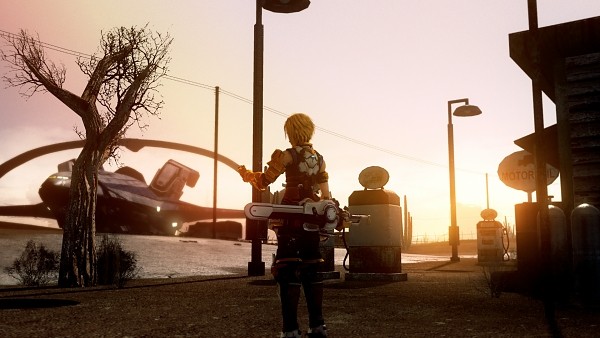 Director Hiroshi Ogawa says that Star Ocean 5‘s combat will be traditional “one-on-one battles” against enemies and the player-controlled character, but bosses can be taken on by the entire team.

Cutscenes and scripted events will be complimented by “seamless events” that can lead to branching paths and dynamic results.

Kotaku dug up the prologue for Star Ocean 5 in the new issue of Famitsu, and it reads as follows:

Do the depths of space forbid peace for mankind?

Centuries after leaving Earth, after a multitude of trials, with the creation and spread of the ‘Galactic Federation,’ humanity was on the verge of unified order and peace.

But the embers of conflict have begun to burn again.

Over 6,000 light years from Earth, on the unsettled planet, ‘Feycreed.’

Just as so many times before, the waves of history begin from a remote planet.

“I decided to change positions and become a producer out of the belief that Star Ocean is worth staking my life and legacy on. For Star Ocean 5, I wanted the game to overtly take cues from Star Ocean 3 and draw its essence from that game.”

“Star Ocean 5 is about bringing a sense of reassurance back to longtime fans which is why the game’s logo is reminiscent of Star Ocean 3’s.

“I’d like to be able to keep putting these games out. By the end, when it’s all finished, we hope we have a game that draws in series fans and new players alike.”

Here is a brief rundown on characters as well:

Square Enix hasn’t officially revealed the game just yet, but the publisher is scheduled to unveil it sometime today. It’s likely we’ll see the game released in North America and Europe, although Star Ocean 5 will probably be released early in Japan.