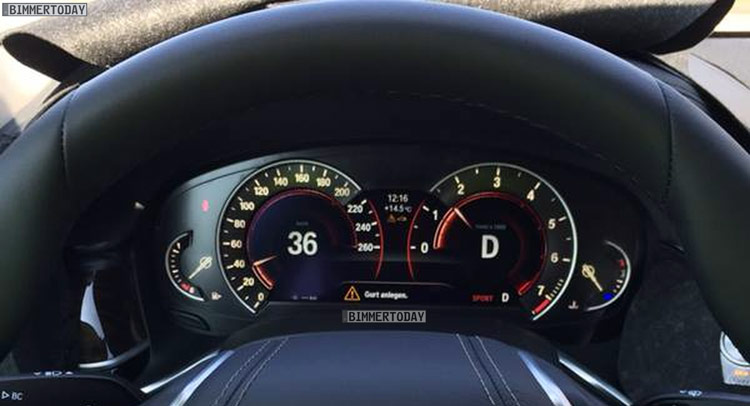 Recently there has been so much revealed about the highly anticipated upcoming 2016 BMW 7 Series. With such a thoroughly interesting model coming up, it seems that BMW (ETR: BMW) has a hard time keeping things under wraps, as more and more spy shots are being revealed.

Earlier this week, a couple of spy shots have revealed the driver’s infotainment system, which comes with a rather peculiar surprise. The dials are half digital, half analogue in the upcoming model it seems.

The shots reveal a rather strange setup. It features the wide center screen which takes up about a third of the circular speedometer and tachometer, where it replaces the analogue readings from 210km/h and up and under 1,500 rpm with digital numbers, adding quite a bit of confusion. As far as driver infotainment systems are concerned this is a pretty unusual setup in certain ways. We will try and cover more information and get to the bottom of this – particularly as the setup has a certain reason behind this for sure. After all, this is BMW we have here and they don’t do things like these for no reason.

The 2016 BMW 7 Series will be revealed later this summer. A possible public reveal might be coming up for the Frankfurt Auto Show. We will make sure to try and cover that event, since there are a lot of interesting new models and releases (the BMW 7 Series possibly among them) being revealed during that.