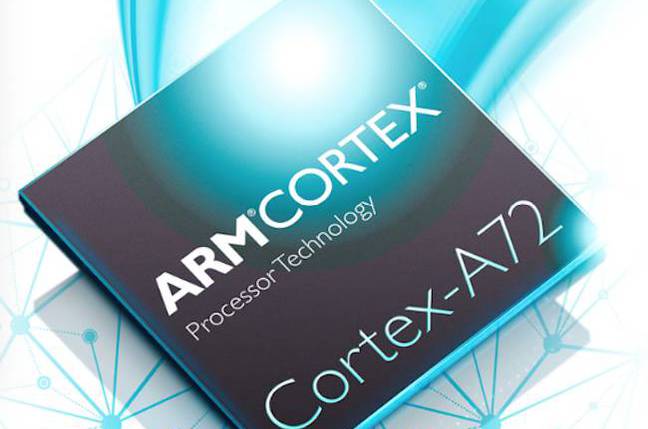 ARM (NASDAQ:ARMH) announced its next-generation core, the Cortex A72, earlier this year, and has now offered more details as to the kind of performance to expect from the chip at its annual Tech Day event. With the Cortex A72, ARM is looking to offer more performance, comparable to that of Intel’s (NASDAQ:INTC) Broadwell lineup of low-power CPUs.

Compared to the Cortex A57, the Cortex A72 core will be 20 to 60 percent faster when it comes to instructions per clock. The core can clock higher, with ARM touting frequencies of 2.7GHz, owing to the reduced area achieved by shifting to a 16nm process. Another issue that ARM addressed with the Cortex A72 is its ability to run at full frequencies for extended durations of time, a feat that the Cortex A57 failed to achieve. 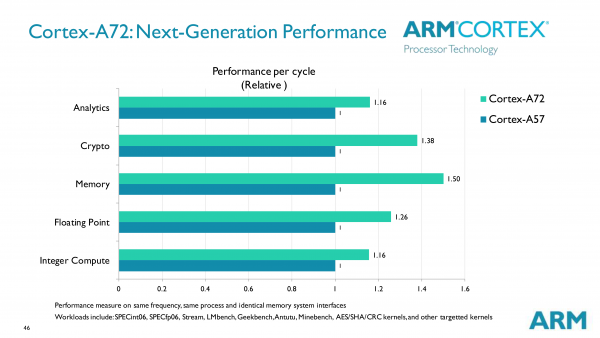 The move to 16nm FinFET process also assists in reducing energy consumption, with ARM highlighting the differences from current-gen 28nm Cortex A57. Overall, we’re looking at a decrease of 20% in energy utilization while delivering 1.5X the performance of the Cortex A57: 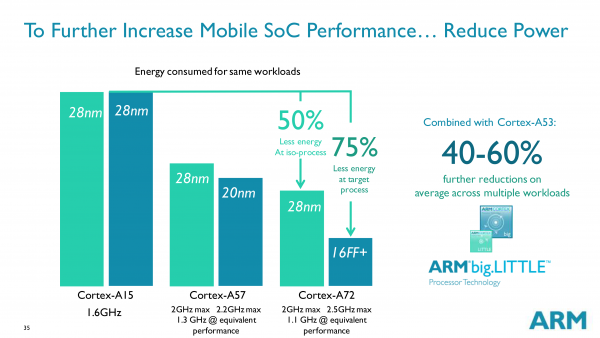 The Cortex A72 is unlikely to match the Core M CPUs full-tilt, but when there’s a power constraint, ARM mentioned that the core can hold its own, stating:”For the same performance, we are certainly sure that, running at full tilt, we’re going to use 75 percent less power [than Broadwell].” 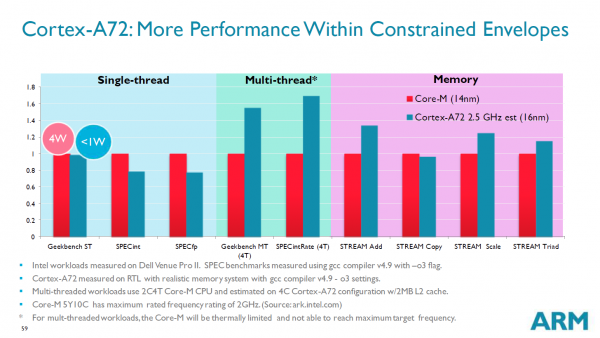 The slide reveals that ARM was able to best Intel’s 14nm Core M with a Cortex A72 core clocked at 2.5GHz. Given that this is a synthetic benchmark, we’ll have to wait for real-world usage scenarios to judge the validity of ARM’s claims.

Cortex A72 will be manufactured at TSMC, with availability in retail hardware slated for sometime in 2016. Qualcomm (NASDAQ:QCOM) and MediaTek (TPE:2454) are going to launch a version of the Cortex A72 built on the 28nm process this year, although that chip will not have the same performance gains as the 16nm variant.