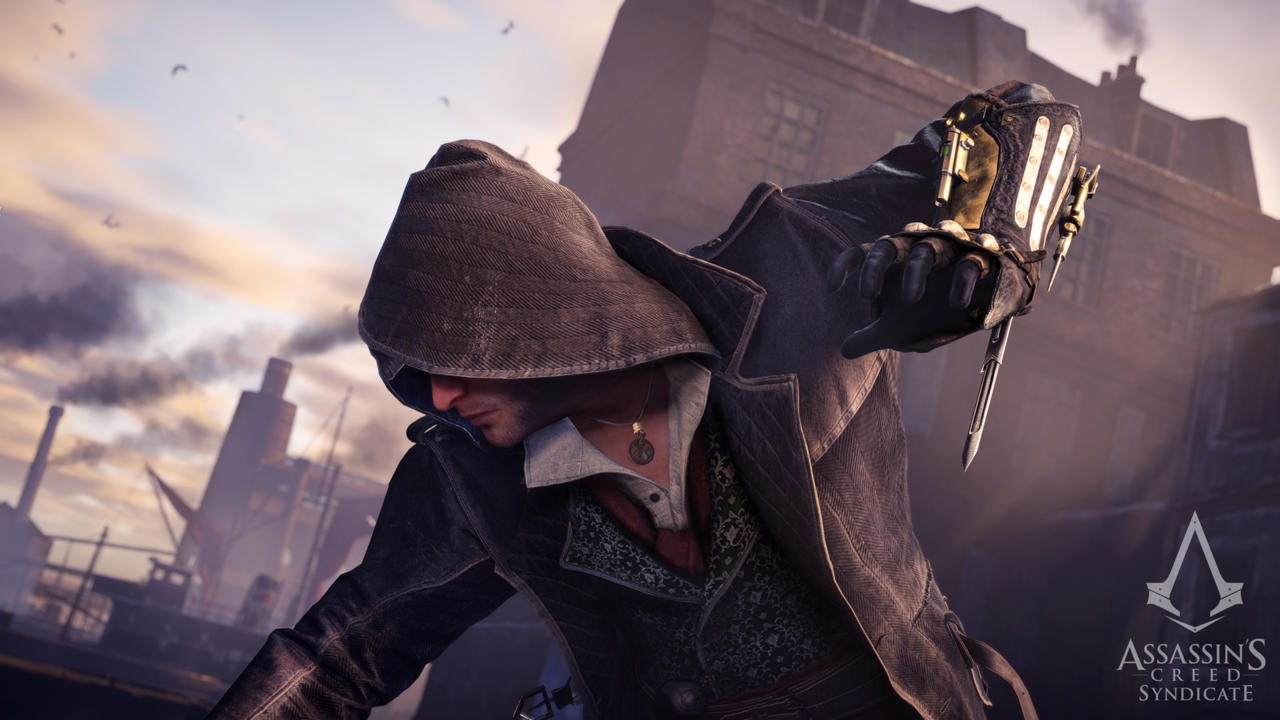 Ubisoft has unleashed a bevy of reveals for Assassin’s Creed: Syndicate, including pre-alpha gameplay footage, story/plot highlights and an intro to the game’s main character, Jacob Frye.

From the new updates we can glean some interesting new tidbits including AC: Syndicate will be a singleplayer-only experience and won’t feature multiplayer, the main character sports a badass “assassin’s gauntlet” that combines the hidden blade with a grappling hook, and the game will be released on current-gen consoles and PC this October.

The game has a decidedly steampunk-ish feel, with Jacob Frye utilizing various gadgets befit the era including a rather snazzy grappling hook. Really it just fits so perfectly, and finally we’re far enough along in history that we get some awesome gadgets to work with–albeit they’re still in early stages.

For all of the pugilists out there, Syndicate features some pretty impressive hand-to-hand brawling action. This is a nice beakaway from the slicing-and-dicing slaughterfests of the previous entries–but don’t worry, the signature hidden blades are included too. 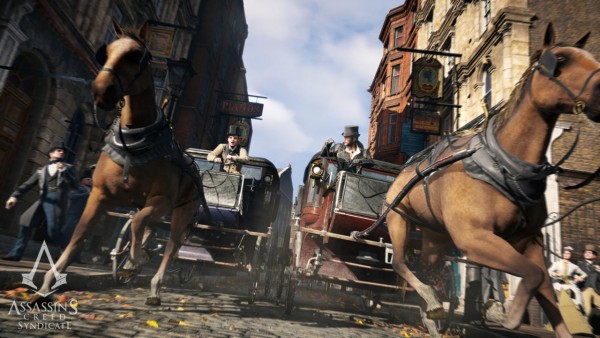 As we already know AC: Syndicate takes place in the tumultuous 19th Century Victorian England. The Industrial Revolution is in full swing, giving rise to technological advancements like the railroad, and leading to a new dynamic shift in Britain’s socio-economnic structure.

Despite these glorious advancements in the bustling industries, the everyday working people of London are suffering–we’re not talking the ones in the fancy suits and tophats, we’re talking about the ones shoveling coal in the refineries. 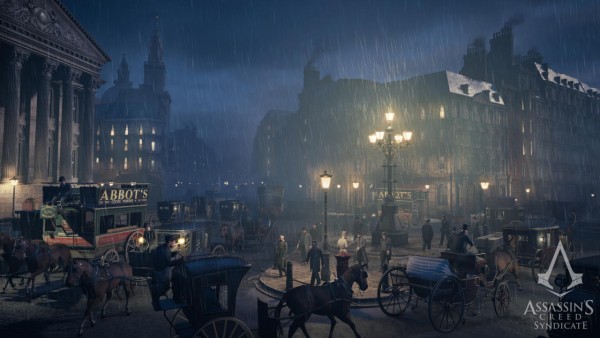 Brutal underground gangs straight out of Clockwork Orange run the streets, with mobs and other corrupt officials lining their pockets with the tears, sweat and blood of the common folk.

The streets of London are incredibly dark and seedy, with underground fighting pits that Robert Downer Jr. would so love. This isn’t exactly your sporty pugilism; this is the “I’m going to smash in your face for money” kind of brawling.

Jacob Frye is actually only half of AC: Syndicate‘s protagonist duo; he shares the limelight with his twin sister Evie, and players will be able to actively switch between the two at any time.

The top-hat sporting Jacob is actually two people: one of his halves strives for freedom by leading a street gang called The Rooks and works to overthrow the exploitative powers that be. In order to grow his ranks, Frye has to conquer other gangs to fuel his “army” of sorts, as the street gangs have a stranglehold over the city and racket the police forces.

You can actually recruit other players and characters to build up the Rooks for some massive street-filled beat-em-up chaos straight out of Gangs of New York. 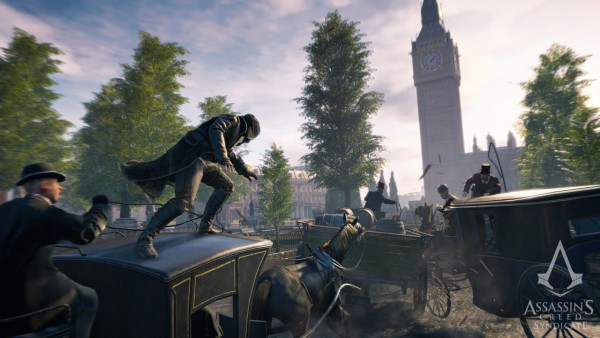 Frye’s other half is a shady Assasssin who dons the trademark hood, cloak and hidden blade to dispatch high-ranking baddies. Both of his identities serve the ultimate purpose in bringing balance to London’s skewed society, and to give power back to the people. Evie basically mirrors all of Jacob’s abilities and roles, and they’re both essentially two different sides of the same coin.

Jacob has an impressive arsenal at his disposal.

Weapons include a wicked kukri (remember Emile’s kukri from Reach?), a hidden blade plus a revolver that Clint Eastwood might approve of. And what pugilist would be complete without a set of knuckledusters? 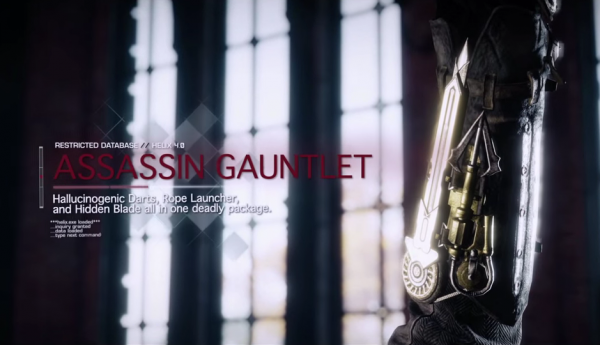 Frye’s most impressive tool is the assassin gauntlet, which is a newfangled steampunk gadget that would impress even the likes of masters like Bruce Wayne.

The gauntlet is more of an all-in-one utility than a weapon; it can fire off hallucinogenic darts that turn enemies against one another, acts as a grappling hook that fires a rope for quick escapes, and finally it houses the hidden blade mechanism for those stealthy kills.

This new invention totally fits the bill as a unique new addition to the series, plus it fits perfectly with the industrial era’s steampunk style. The assassin gauntlet will likely be one of the defining elements of AC: Syndicate, along with the new brawling hand-to-hand chaos.

Below we have a quick TL;DR breakdown of some of the major updates, and be sure to check out the alpha gameplay footage above to check out how the game is coming along.

Assassin’s Creed: Syndicate is slated to release on PlayStation 4, Xbox One and PC on October 23, 2015. 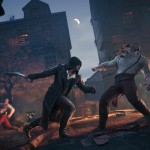 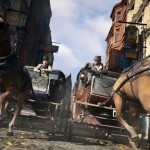 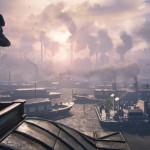 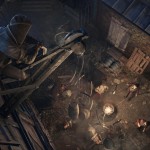 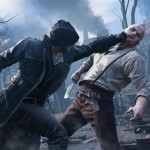 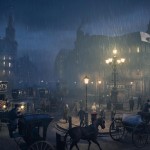 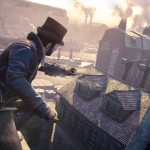 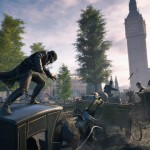 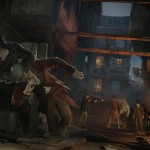