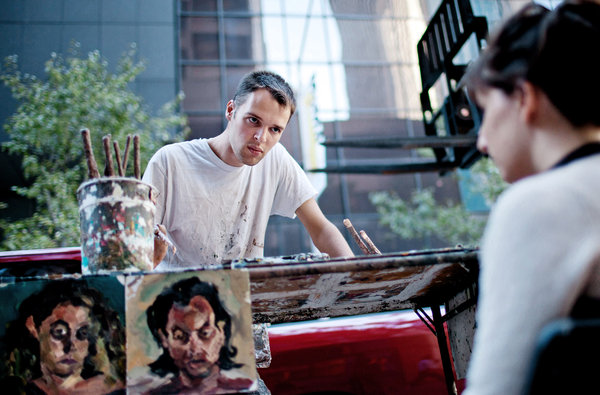 Ask any starving artist: it’s nigh on impossible to get paid for your work. Over time, artists come to realize that their work is simply a labor of love. They enjoy what they do and do their best at it, often even using the the most cutting-edge equipment, but realize that making money is usually a far-off distant dream.

In a column for The Guardian, freelance writer Amien Essif discusses his struggles about being paid for his craft. “There’s not much money in writing these days either,” he says. “The US lost 2,600 newsroom jobs in 2012. Just to throw their hat in the ring for the dwindling jobs, novice journalists might find themselves working two, sometimes three unpaid internships in a row. Plus, freelancers tend to work pro bono until they’ve established the clout to ask for a fee. And poets – every dollar they make is a trophy of its own, something they might frame rather than spend.”

At the same time, many who wish to be patrons of the arts feel that they are priced out of it. Art is something they simply cannot afford. It’s too expensive, and what’s available in their price range is of such low quality that it’s not much better than a poster bought at a museum gift shop. The real goal for both consumer and merchant, is to find an equilibrium that is affordable to purchase, yet actually gives a decent income to the artist.

With that in mind, there are a growing number of online art galleries such as Lumas, that have sprung up that fill this gap between the demand for affordable art and the ability for artists to monetize their work. This is allowing the general public to buy art from an established artist or an independent up-and-comer. From this, an economy has developed that is a meritocracy; new artists have a chance at finally breaking into the industry through these kinds of marketplaces.

Some say that the Internet has been a force for worse to the art industry. Art, they say, is easily copied and the fact that a file of a work of art is non-exhaustible means that its value is rapidly approaching zero. Yet, this seems absolutely false. The Internet has become an incredibly powerful tool to connect buyers and sellers, and simultaneously allowing artists a new market that simply wasn’t possible before.

All in all, try your best to support local artists, whether they be writers, photographers, painters, or otherwise, and in turn you’ll find that there is a wealth of incredible talent, and at an reasonable price tag.