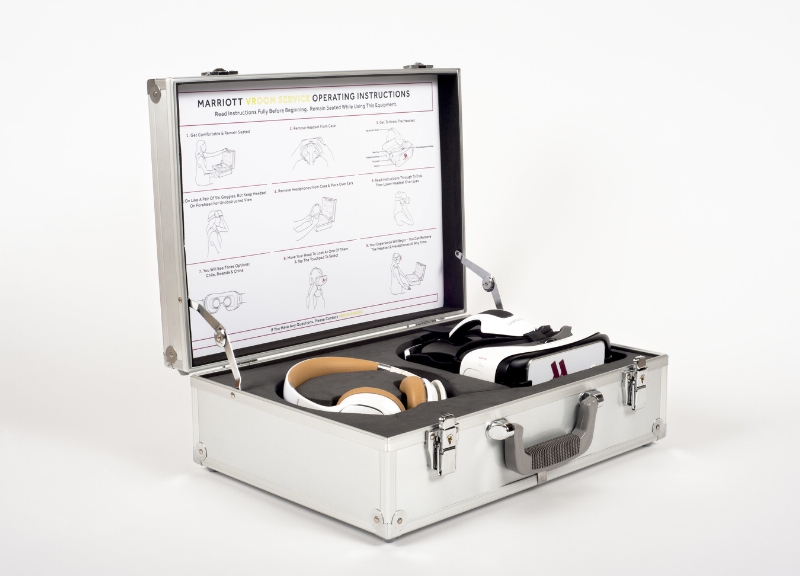 VRoom consists out of a business suitcase available to guests of respective hotels, which contains Samsung VRGear and headphones. Once connected to hotel WiFi, you can explore Marriott VR experiences – Virtual Reality Postcards – 360 degree panoramas of attractive locations around the globe. For starters, you can ‘visit’ the Andes in Chile, busy streets of Beijing, China and something unusual – an ice cream show in Rwanda. The hotel chain teamed up with known VR content powerhouse Framestore, and these three ‘postcards’ are just the first in what should be dozens, if not hundreds of postcards in the upcoming years. Video below shows you how the VR postcards were created.

If you’re not visiting those Marriott hotels, you can still experience the postcards from VRoom service. Samsung is making those postcards available through its Milk VR premium video service, which probably every owner of Gear VR headset already installed.

All in all, hotel chains are moving forward with service and reacting to ‘shared economy’ challengers such as AirBnB and Couchsurfing. First Starwood (SPG) launched keyless app, where travelers use their mobile phones to access the room instead of room keys, Hilton enabled you to start selecting available rooms in the hotel, while Marriott signed deals with Neflix (warning: binge watching alert), introduced 4-D virtual reality experience called The Marriott Teleporter, and is now bringing VR into hotel rooms, alongside already known ‘Complementary GoPro Loan’ program.