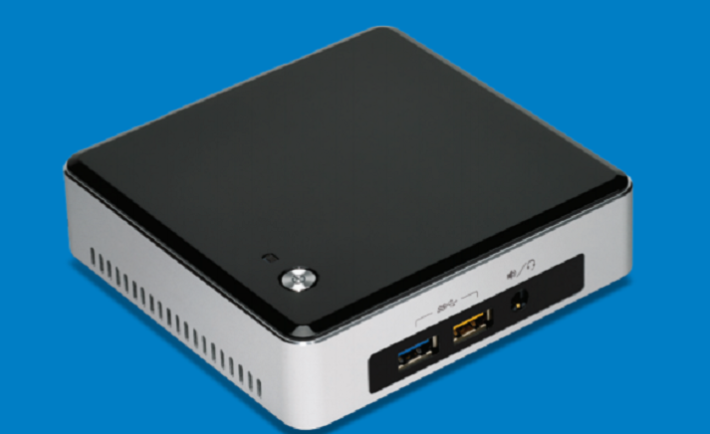 In the world of computing, the big iron – workstations, servers and HPC, were my main focus for the most of the past three decades. However, something on the opposite end of the spectrum from HPC, the kind of uber-mini desktop device, even smaller than HTPC – attracted my attention.

This miniature box platform, using laptop CPU and chipset platforms & integration, but desktop peripherals and connectivity, is called many names: from NUC (Next Unit of Computing) by Intel, whose ex-desktop mainboard division is in charge is this product line; to Gigabyte’s BRIX line, likely named in the honor of their ex director and our good friend Colin Brix, and so on – but they are all basically the smallest form of HTPC platform.

The little boxes in general are up to 5 x 5 x 1.5 inch (13x13x4 cm) sized, depending on whether they only accommodate a single M.2 SSD or also an optional secondary drive, usually a slim, 2.5” SATA HDD or SSD. The CPUs in most cases are dual core Intel 15 to 30W varieties – if they have integrated Iris Pro graphics, then there will be no added discrete GPU, otherwise one will likely be inside. The reason? All current boxes must be able to flawlessly handle 4K TVs and monitors at least at 30 Hz refresh, with decent performance minus the 3D gaming. Iris Pro on Broadwell and Skylake CPUs can provide satisfactory image and video – and rudimentary 3D – performance even at 4K resolution even at 60 Hz, so why bother with the discrete GPU then? Interestingly, AMD new generation APUs could fit this role just as well, but you don’t see too many of them around. 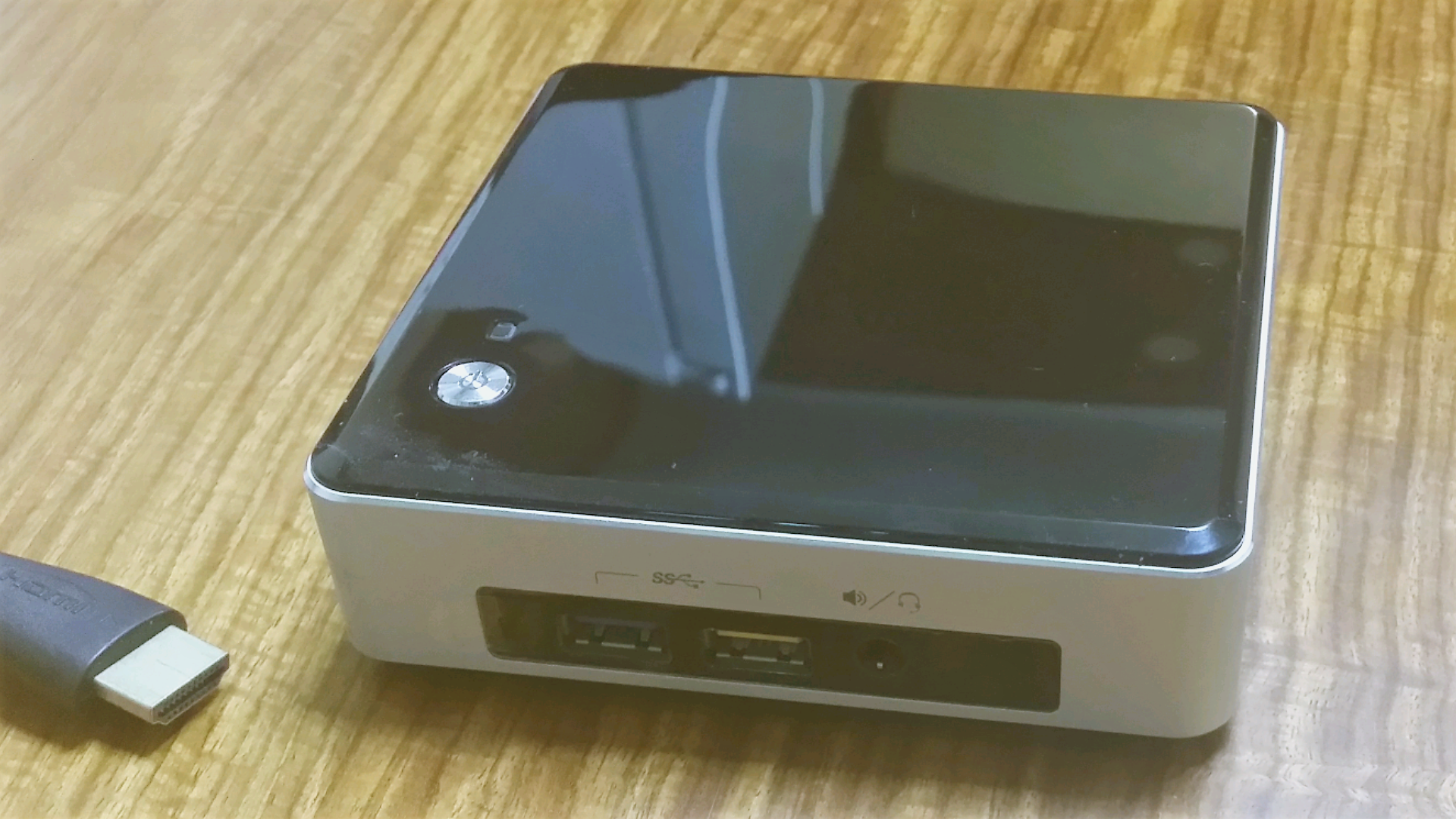 Wishing to see how the actual everyday use of such box would feel, I had a chance to fiddle with Intel’s Broadwell Iris Pro-based NUC 5i5RYK box for a while now: the basic ~ 4 x 4 x 1 inch box has a dual-core CPU on a miniature mainboard that leaves just enough space for two SO-DIMM DDR3L-1600 slots as well as one M.2 SSD slot. I used the always reliable G.Skill RipJaws DDR3L-1600 low-power, low-latency DIMMs, for a total 8 GB capacity (assumed sufficient for a HTPC machine). For the SSD, Patriot provided a M.2 240 GB unit, again a presumed OK capacity for baseline box attached to your TV. 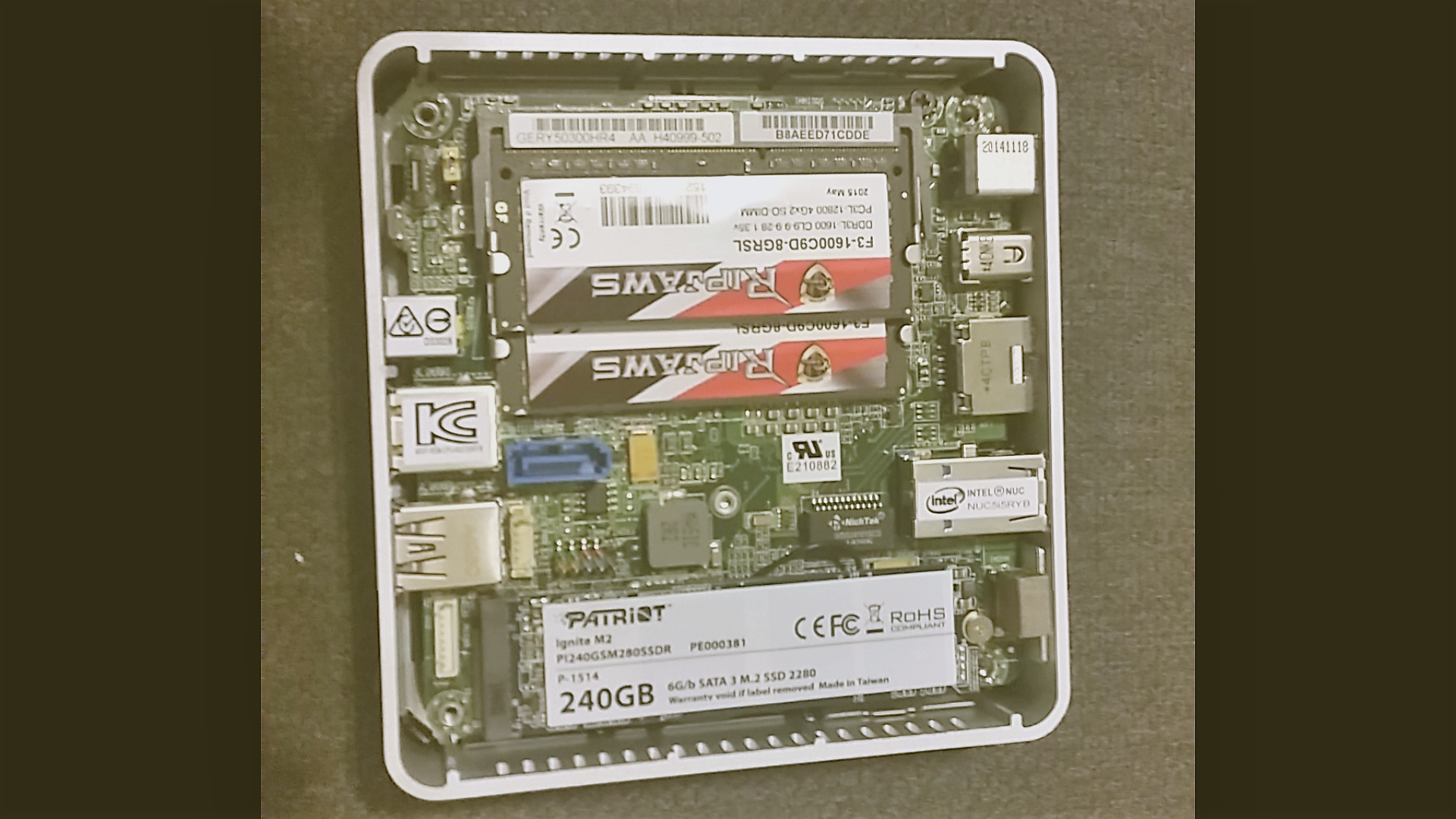 Inside the NUC 5i5RYK, once fully populated. G.Skill low-latency memory helps with graphics performance, while M.2 SATA is a beast for OS drive, with 2x the performance of regular SATA Drives.

The box has one USB 3.0 and one USB charging port in front, together with audio jack, while the back side contains the 19V jack for the external PSU, HDMI 1.4, DP 1.2, two more USB 3.0 ports as well as Gigabit Ethernet – something I would still highly recommend for a home setup for both speed and latency, instead of another dose of unhealthy Wi-Fi radiation towards your innards, even though the Wi-Fi is there too. Why? Because, this being a static box often attached under or even on the back of your TV, meaning usually very near the home fiber or cable router, it can be easily attached to the network using a simple and short Ethernet cable – faster, shielded, secure and healthy.

I installed Windows 10 on the system, and ran it on a Toshiba 40-inch Full HD TV set, as well as on Skyworth’s 50-inch (127cm) 4K UHD TV set, both over HDMI. In both cases, the system automatically activated the native 1920×1080 or 3840×2160 resolution right at the OS GUI boot time. As a reasonable expectation of what a typical HTPC mini box user may use daily, I ran various HD and UHD movie streams, both online and offline, as well as standard Web browsing with content rich pages.

At both resolutions, the system handled video playback without any visible frame drops or unevenness, and there was no visible response degradation by moving from HD to UHD. I didn’t bother to try 3-D games in any serious settings at these resolutions on this box, as it would be just the same as trying to put a Ferrari transmission onto a Volvo truck engine – these are things meant for totally different usage models.

Talking about the usage, I did notice that the box gets somewhat warm after an hour or so, with that warmth level then staying stable for several hours – provided there is some airflow in the room. The passive cooling in the box, made to keep it absolutely silent, has this necessary compromise.

I feel this mini box approach definitely has some appeal as a small, literally invisible addition to your home TV set, making it a true Smart TV in many more ways than what the TV manufacturer’s same named functionality claims – you basically have a true 64-bit PC with all the freedom of use and capabilities that any midrange desktop would have, minus the big box under your (TV) table.

And, if you want total freedom, including removal of the Windows 10 always-on snooping on you, well most of these boxes can nicely accept any major Linux desktop distribution with full functionality… so a 4K TV ‘open source’ box is a reality now.

What can be improved? Well, since SSD drives are still tad too expensive to be on every TV appendage, I would recommend that you look at the bit thicker, ~ 1.3 inch format box type that accommodates that extra 1 TB to 2 TB Ultrabook-type HDD as a secondary drive. This way, the less important stuff and all the multimedia content can reside on that drive, which has more than sufficient bandwidth for HD/UHD video playback.

The connections? Of course, HDMI 2.0 and DP 1.3 or Thunderbolt will be a must for the Skylake based, 2016 mini HTPC generation. Trying to squeeze two M.2 SSD slots may not be a bad idea if space allows, but again, these are not high end desktop PCs, but essentially a TV appendage.

What about going all wireless? Well, I do not agree with Intel and many other vendors pushing for totally wireless boxes as the only long term choice, since today’s wireless power charging attempts are a faint echo of what our countryman Nikola Tesla did well over a century ago with suppressed global free wireless power transmission. And, frankly, anything wireless can be easier disturbed, snooped on or affected by external factors. The cabled solution, especially with USB 3.1, Thunderbolt etc., is a very fast and stable base to stand on – the wireless (including wireless charging) capability will be there anyway.

So, to answer the title question, the little box has matured, and CAN BE your main PC if you are a layman home user whose all main multimedia, content management and social network tasks are fine to be handled on a large format TV – and, with cheap & good 4K TVs these days, there will be a plenty of those. For more sophisticated users, though, the little HTPC will simply be yet another of their many PC systems of different formats, specifically for ‘beyond Smart TV’ use or even for kids. And, if you are a corporate with a big sized TV in your conference room instead of a projector, then this box can be fixed mounted there to load in all the presentations and other documents to be shared during all those meetings, rather than relying on the cumbersome laptop connections.

Over the next month, we will look deeper both into the Intel’s and other vendors’ mini boxes, and see what else is there to discover.