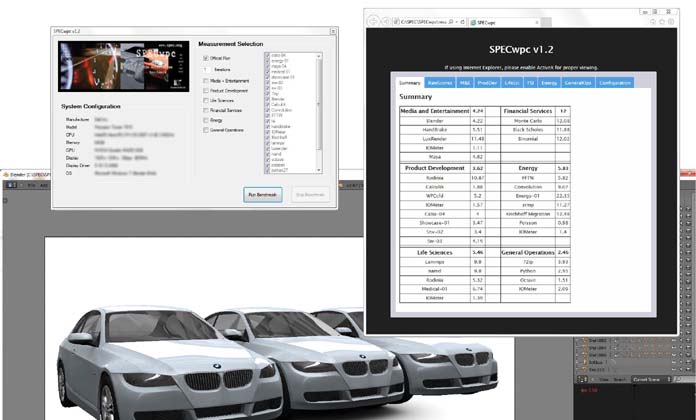 New SPECwpc V2.0 benchmark marks a new chapter for SPECwpc body, which creates professional benchmarks utilized by commercial entities and research institutes in order to find the ultimate hardware performance on a set of industry-standard benchmarks. Most of upgrades were focusing on changes going on with the PC architecture. According to SPECwpc, these are the upgrades inside the benchmark suite:

As you can see, SPEC reacted to changes in storage, with SSDs achieving bandwidth from 500 MB/s for SATA-III (5 Gpbs) devices, all the way to 2.5 GB/s, achieved by latest generation PCIe/NVMe based devices. Furthermore, Hyper-Threading and multi-core processors are optimized to react with what’s going on with the workstation processors. Xeon processors now come with as much as 10 cores, and 20 threads, while the standard in 2014/2015 was six cores and twelve threads. While AMD has miniscule market share, their processors are still 16-core, 16-thread – and as such, all multi-core processors, regardless of coming from Intel or AMD – will face limitations of Amdahl’s Law.

It comes as a 3.6GB download, available for free for all non-commercial users. If you are, on the other hand – a commercial entity, you are required to pay a $5000 fee. Without any doubt, finding a way to charge some Far Eastern commercial companies is the most challenging part of any benchmark organization, yet alone one which focuses on professional hardware whose cost easily runs into tens of thousands of dollars. However, if you want to bring a system down to its knees, and optimize performance out of it, SPECwpc V2.0 should represent an integral part of your suite.

SPECwpc V2.0 requires 64-bit versions of Windows 7 SP1, and 8.1 SP1. It will probably run on Windows 10, but we experienced issues. The issues had nothing to dow with SPECwpc, but rather Microsoft Windows 10 not liking… Microsoft HPC Pack 2008 R2 update, mandatory for benchmark install.