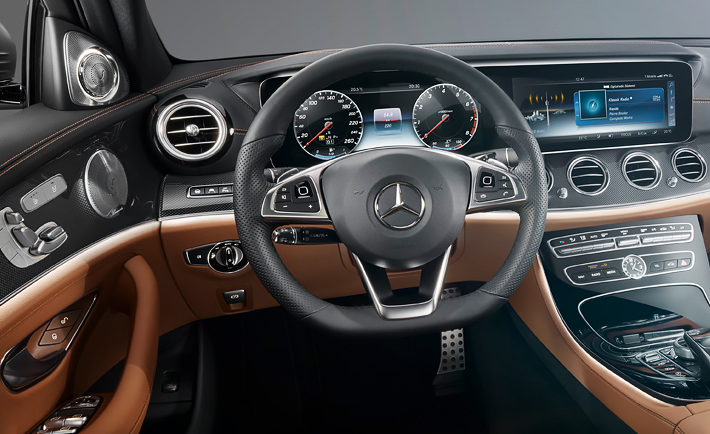 117th edition of the North American International Auto Show will take place in Detroit, MI between January 11-24, 2016. Among 50 or so world premieres, perhaps the key launch will be the one coming in the shape of new E-Class, one of best selling cars coming from the three-pointed star from Stuttgart, Mercedes-Benz.

The new E-Class launch is perhaps even more important than the company flagship S-Class. Unlike the S-Class, which rules the market where BMW competes with the 7-Series, Audi A8, Jaguar XJ etc., E-Class has to battle a lot of competitors, and the company lost sales advantage in the mid-2000s, with Audi A6 and BMW 5 coming to the front. In order to change that, Mercedes is for the first time, putting ‘the best’ of its technology into the E-Class, rather than in the S-Class, and then trickling it down the line. The state of car industry today dictates that ‘no one is safe’, and you can no longer rest on your laurels forever. Tesla Model S changed that forever and car makers now have to come with ‘best and brightest’ with every model. 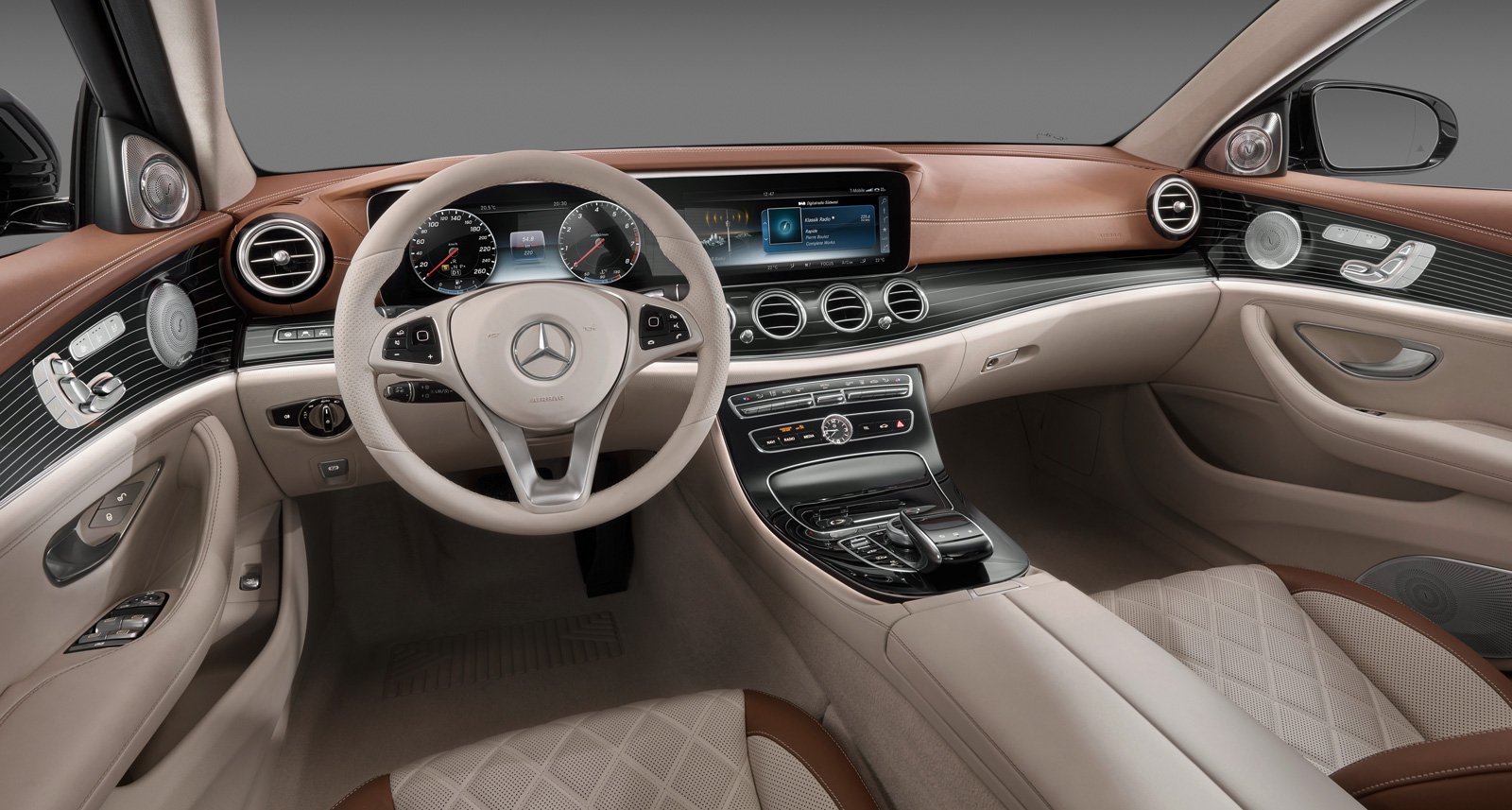 The interior of the 2017 E-Class is dominated by two 12.3″ displays which the world saw first in Tesla Model S.

Thus, it is not surprising that the new E-Class is being pitched as the most advanced conventional-powered vehicle on the road. As you can see from the images, Mercedes Benz decided to reveal its interior one month ahead of the world premiere, and the interior is something special.

Two displays feature a 1920×720 pixel resolution, but at the moment of writing, we’re not aware of which chip manufacturer designed the processor that powers them. The displays come as an integral part of COMAND Online extra, while the base configuration will feature tiny displays, which the company is keeping hidden at this point in time. We managed to learn that base models will have two separate displays, a 7.1″ instrument cluster with 1000×600 pixel resolution, and 8.3″, 960×540 as the central display. If you’re considering an E-Class, please buy the COMAND Online system, since we would bet the 7″+8″ combination looks like c**p. 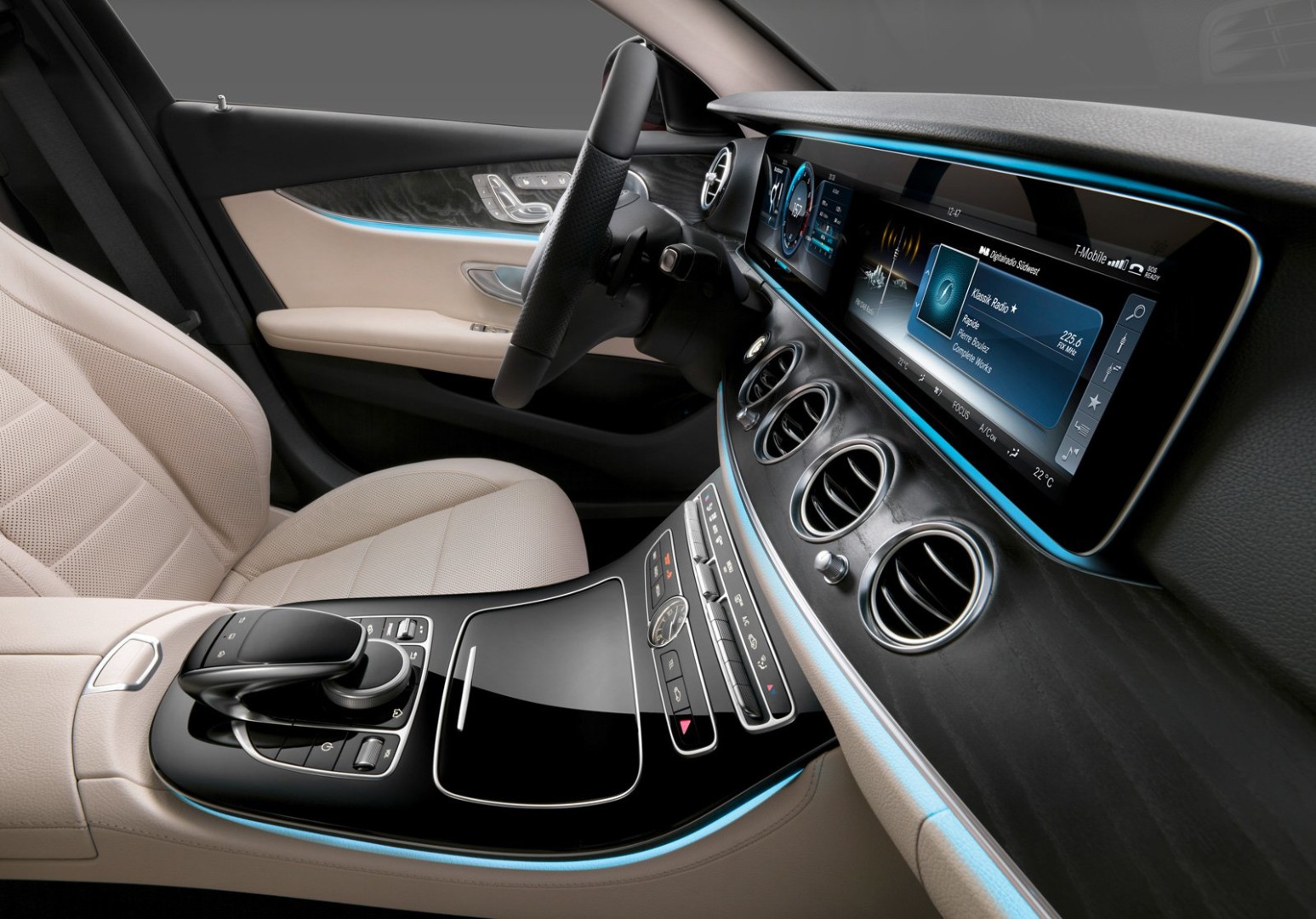 The 2017 E-Class interior looks amazing – finish quality should be as equal as the one in S-Class, which is a welcoming improvement over the past couple of generations.

The changes company made do not go just into the size of screens. Each car comes with three display options, which change the color of the interior as well (you can see the back light stripes inside the cabin): Classic, Sport and Progressive. In order to design the 2017 system and enable future customizations, Mercedes Benz founded two subsidiaries: Digital Graphics & Corporate Design” and “User Interaction”. 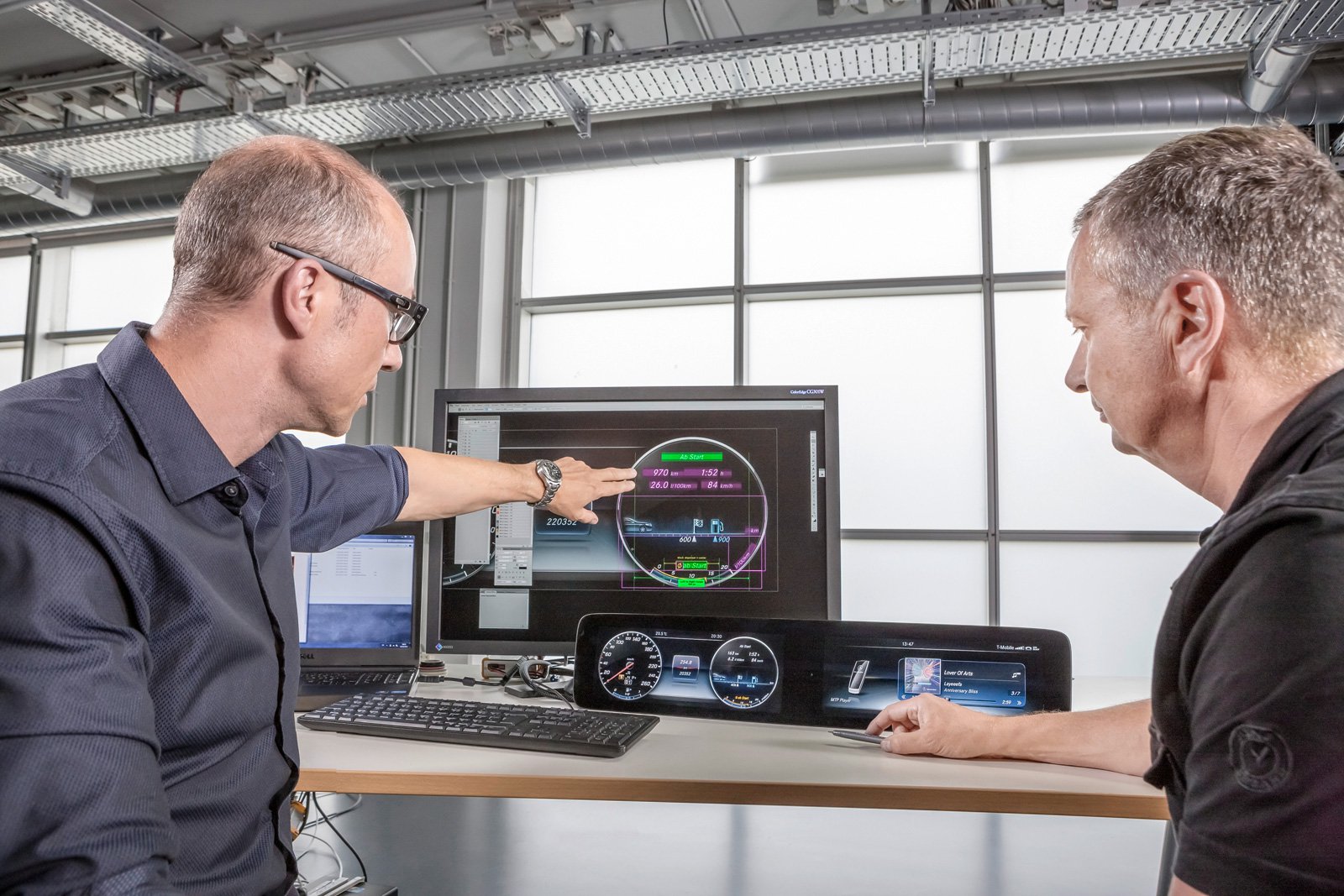 Engineers from two new design-focused business units of Mercedes Benz are discussing how to implement new technology into the E-Class dual-display design.

The car also features automatic driving mode, which is becoming somewhat a halo feature that almost all car makers need to offer in their high-end cars. You can see how the 2017 E-Class interior looks like in the following “Masterpiece of Intelligence” video:

In any case, we managed to learn more details about the new E-Class, which are not being published today. Engine options are focusing around the brand-new diesel engine and a plug-in hybrid technology, which will connect to both petrol and diesel engines. The company expects that the key engine will be the OM 659, a brand new four-banger which is 40 kilograms, 88.2 pounds lighter than the outgoing model. E220D will come with 190 hp, and produce 400 Nm (295 ft. lbs) torque. What makes this model very interesting is the announced fuel consumption of 4.0 liters per 100km, or  71 mpg.

Overall, the new E-Class with plug-in hybrid based around the V6 engine should bring quite an interesting performance kick, while saving fuel. Representatives of the company are aware of all the issues VW and Audi experienced with their plug-in hybrids (Golf GTE has issues satisfying the demand, Passat GTE is still available in limited quantities, while A6 and Q7 diesel-electrics had a lot of issues with the design of electric distribution box, pushing the models into 2017) – and they want to make sure all the E-Class models are available from day one.

During 2016, the E-Class will be available in standard sedan version, China will get the extended L-version as well, T-Model (Station Wagon). 2017 will see the arrival of E-Class Coupe (no longer branded CLK), E-Class Cabrio, as well as two CLS models (Coupe-sedan and shooting brake) which will go against the BMW 6 and Audi A7 series.

All in all, it is interesting to see how the car industry is focusing on user experience more and more, implementing technologies we in the world of technology – enjoy for years. Glad to see that the most advanced car cockpits won’t come as HUD display from Need for Speed or Gran Turismo.