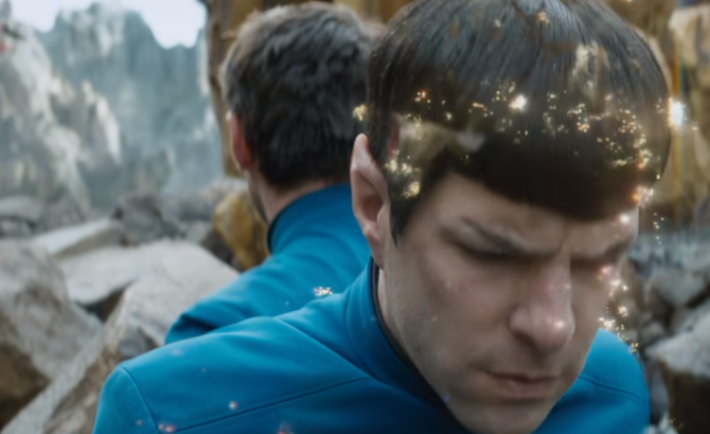 Spock getting teleported, Bones Behind.

2016 will be a big year for Star Trek fans. The beloved franchise is turning half a century, and while from today’s perspective some parts of the original TV show were tacky at best, this is a show that broke more barriers than any TV show before, and dare we say – after. Interracial crew, interracial kisses at the time when some backward states in the U.S. were forcing separation between students and in buses (banned by law, but it still existed), hiring gay actors – mixing it with technology which we got to live today.

When JJ Abrams rebooted the franchise in 2009, the movie parted ways with the existing preconceptions by entering a parallel universe, achieving almost $400 million at the box office. In 2013, Star Trek: Into Darkness was a great reenactment of Star Trek II: The Wrath of Khan, scoring almost 500 million dollars at the box office alone. Third installment in the new universe, Star Trek: Beyond is scheduled to arrive in June 2016, and the brand new trailer is released this week, alongside Independence Day 2 and at the movie premiere of competing universe, Star Wars VII: The Force Awakens. Given that JJ Abrams decided to stay around for both Star Trek and Star Wars, we can pretty much say he has the weight of the (fan)world on his shoulders, as conflicts between both franchises probably spilled more digital ink than any other franchise or sport.

The cast and crew are well known to all the fans – Chris Pine returns as James Tiberius Kirk, Zachary Quinto is Spock, Karl Urban is Bones, Simon Pegg is Comedy Relief… sorry, Scotty, Zoe Saldana is Uhura and the unannounced roles will be played by Idris Elba and Sofia Boutella.