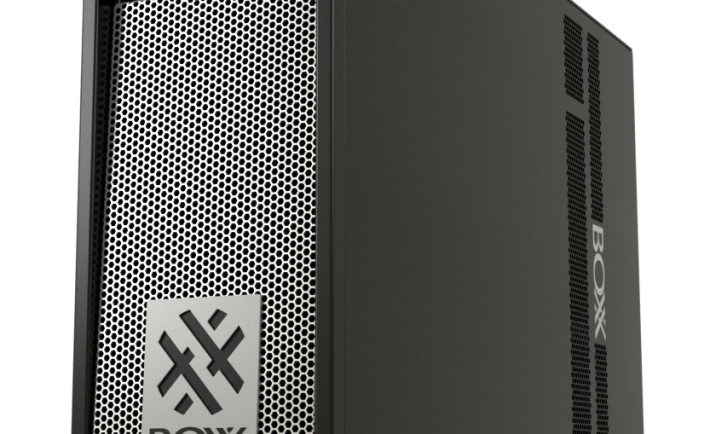 Buying a compute device – be that a personal computer, workstation or a server, typically comes with a certain set of features which does not change. All workstation vendors for example, offer 1-4 expansion cards, typically a GPU and computational or storage cards. Those features are limited by what motherboard vendors can offer, and ATX/eATX/SSI standards can offer up to X amount of cards.

BOXX Technologies decided to challenge that by launching APEXX 5, a custom designed system which can host up to seven expansion cards. For example, a Quadro GPU for sync/display output and five Tesla boards for compute. If you go with Dual-GPU boards, such as Tesla K80 – you could put up to 11 GPUs in a single computer.

So, how BOXX did it? The company got a second wind when Chris Morley, Sr. Product Marketing Manager rejoined BOXX after spending almost a decade in world of gaming hardware, with disruptive companies such as MAINGEAR (note: Chris loves to work for companies whose names are written in all-caps). Coming back to BOXX Technologies meant that the company could execute on disrupting the workstation space, which is dominated by somewhat dull boxes. As Chris says:

“In many cases, architects, engineers, or visualization professionals have very specific workflow issues that can only be solved with the ultimate hardware.” 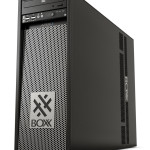 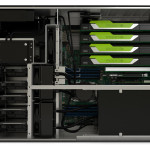 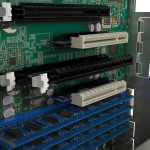 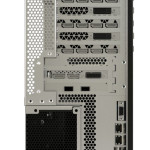 Backside shows how much display outputs you can count on. 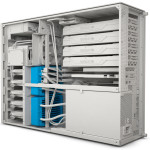 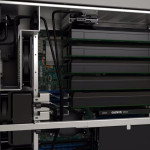 Another look at the interior with different compute options.

The hardware on offer is ultimate indeed. Hardware platform will be home to current Haswell-E based Xeons, and upcoming Broadwell-E Xeons. That means that today, you can purchase the platform with up to 36 cores (72 threads), up to five Dual-Slot GPUs (Tesla / Quadro / FirePro / Xeon Phi), one single-slot GPU, and pair this with substantial storage subsystem.

The storage subsystem is split into two: front-located hot swap drive cage with up to eight 2.5″ drives (that’s up to 16TB Samsung or 32TB storage with the upcoming Mushkin SSD), and up to five full-size, 3.5″ hard drives. That’s 50TB of storage should you go with 10TB drives from HGST or Seagate.

BOXX sees APEXX 5 as an ‘ideal for GPU rendering in V-Ray® RT, NVIDIA® Iray®, Octane Render, or CATIA Live Rendering or with simulation software like ANSYS, ANSYS Fluent, FluiDyna, and SIMULIA.” Read: this is for Airbuses, Boeings, Lockheed Martins, but also Ferraris and other automotive/aerospace/defense providers. We would add it might be the ultimate ‘blackpool box’ for Wall Street too.

We look forward towards putting the system through its paces.