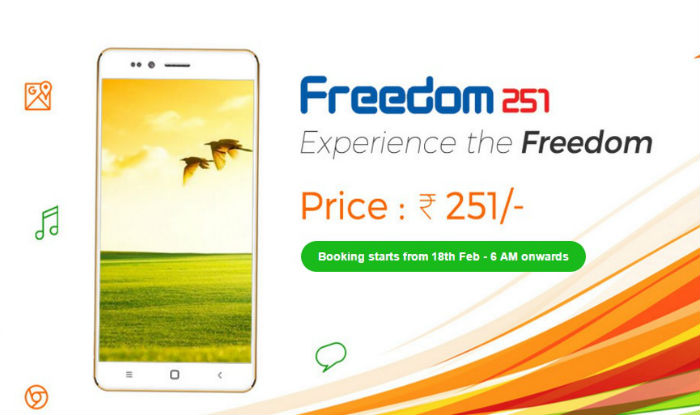 Today, a company named Ringing Bells launched a brand new smartphone. The device is called the Freedom 251 and it costs 251 rupees (about £2.50 or $4) – about the same as a Starbucks cup of coffe – in most cases. It comes with a one-year guarantee, and has surprisingly decent specifications – on paper at least.

The Freedom 251 comes with a a 4-inch 960×560 display, a 1.3 GHz quadcore processor (manufacturer is yet unknown), it’s equipped with 1GB RAM and 8GB of internal memory. It comes with a micro SD card supported up to 32GB  and it features a 1450mAh battery.  For those Rajastan selfies, there’s a a 3.2-megapixel rear camera and a 0.3MP front camera. Overall the usual specifications seen in most of today’s smartphones, but at a seemingly much, much smaller price point.

As far as the company itself, Ringing Bells is a local Indian company. Established in 2015, it claims to be the fastest growing smartphone manufacturer out there. A bold claim, to say the least – the Indian market is some 1,200,000,000 strong, making any company – specially a mobile phone producer – a rather successful business entity in such a case.

The Indian smartphone market has been growing substantially, specially due to the “Made in India” local gov. initiative. Make in India is an initiative of the Government of India to encourage multi-national, as well as domestic, companies to manufacture their products in India. It was launched by Prime Minister Narendra Modi on 25 September 2014. India would emerge, after initiation of the programme in 2015, as the top destination globally for foreign direct investment, surpassing China as well as the United States.

Update: According to various sources, Ringing Bells have suspended taking orders for the Freedom 251 smartphone for 24 hours. The suspension is due to high-demand and an overload of the capacities of the company, not allowing them to produce the amount of phones to satisfy the demand right now. The Noida-based firm had unveiled the smartphone yesterday, bookings for which started today morning at 0600 hrs.

“Dear friends, we are very grateful for your enormous response and your kind patronage and would submit that as of now we received approx. Six Lacs hits per second as a result of your kind overwhelming response, servers are over loaded,” Freedom251 said on its website.  “We humbly submit that we are therefore taking a pause and upgrading the service and will revert within or before 24 hours,” it added.

In true fairness, one most thoroughly rethink the decision to buy for example, an Apple iPhone or a Samsung Galaxy, all with a price of $400 and above, while this costs as much as a movie ticket or less. Shakeups like this one will shape up the world’s economy in the forthcoming years for sure.