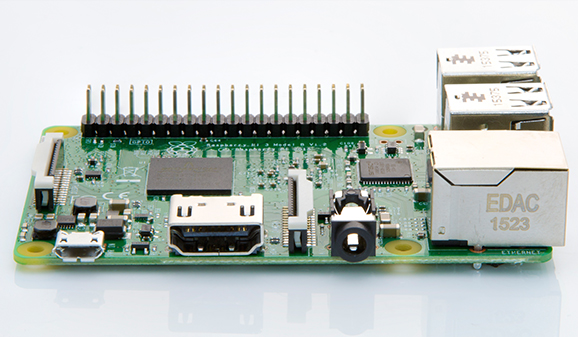 There’s no doubt that Raspberry Pi micro-computer is a runaway success. One leap year ago, the original Raspberry Pi computer debuted on Kickstarter and started a trend of micro-computers and computing DIY communities. With over eight million units sold, the idea of a simple computer ‘for kids’ even outsold the original micro-computer, Arduino. It inspired companies like Intel to start their own mini-computing projects, Intel Galileo:

“The idea behind a tiny and affordable computer for kids came in 2006, when Eben Upton, Rob Mullins, Jack Lang and Alan Mycroft, based at the University of Cambridge’s Computer Laboratory, became concerned about the year-on-year decline in the numbers and skills levels of the A Level students applying to read Computer Science. From a situation in the 1990s where most of the kids applying were coming to interview as experienced hobbyist programmers, the landscape in the 2000s was very different; a typical applicant might only have done a little web design.”

In 2015, Rasbperry Pi Foundation introduced world’s most affordable mini-computer. For just 5 quids, or 5 bucks, you could buy Raspberry Pi Zero, a Linux-powered micro-computer that offered the same performance as the original Raspberry Pi, 7 times cheaper. Yet, progress never stops. For 2016, we’re witnessing the launch of what could be the cheapers 64-bit computer, and one that even supports Microsoft Windows 10 (not a joke).

Raspberry Pi 3 is now on sale for 30 British Pounds or 35 U.S. Dollars, depending on where you live. For that amount of money, you get the following components:

Users have to download 32-bit version of Raspbian, with the Foundation now evaluating should they expand Raspbian with a 64-bit version as well. For as long as they’re sticking to 1GB of system memory, the difference between 32-bit and 64-bit are non existent, but should you build a more powerful Raspberry with more than 2GB of system memory, you might run into a need to recompile the code. Then again, you can always opt to take the alternative route, and install Microsoft Windows 10 IoT Core Edition. for example, if you want to invest more, you can buy Raspberry Pi 3 directly on Microsoft Store. For $49.99, Microsoft is bundling a 16GB microSD card (Class 10) with NOOBS installed.

As the adoption trend accelerates, we would not be surprised if we Raspberry Pi 3 reaching 10 million sold units by the end of 2016. As an organization, this non-profit foundation now employs over 60 full time employees, so delivering larger volumes should not be a challenge as it was in the past.