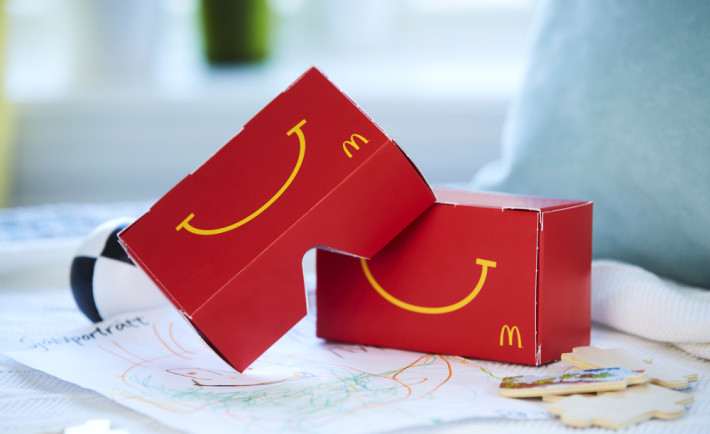 In just a few days difference, giants of fast food and soft drinks announced their entrance into the world of Virtual Reality with their products. Regardless of what you think about nutritive values of Coca-Cola soft drinks and McDonald’s Happy Meals, they just launched initiatives that have the potential to become world’s best selling VR ‘manufacturers’.

When Google released its Cardboard VR, the company also released schematics and invited as much companies as possible to adopt the Cardboard VR design in their packaging. Less than a year later, these drawings are becoming real world products, thanks to Coca-Cola and McDonalds. Coca-Cola came out with a concept of its popular 12-can container packaging which folds into multiple Cardboard VR goggles.

While the latter two are promotional and need a regional / local partner to drive the experience, 12-can Fridge Pack is something almost every retail store carries, and ordering from e-tailers such as Amazon isn’t out of the question. In fact, that’s Amazon’s #1 selling soft-drink product. Normally, the question is will Coca-Cola ever held to their promise of using recycled aluminum for their cans, or will they keep to pollute the planet forever?

Enter McDonald’s. The company sells about $2.5 billion worth of Happy Meals each year, approximately 10% of its overall revenue. In order to keep the children going with times, the fast food giant changed its Happy Meal menu, moving to healthier ingredients such as Apple juice or Apple chips – but the company isn’t stopping there. In a pilot program in Sweden, McDonald’s launched Happy Goggles – Happy Meal packaging which transforms into Virtual Reality Goggles of the Google kind.

McDonald’s isn’t just releasing the Happy Goggles Happy Meal. The company also developed a simple, children-oriented app “SE UPP I BACKEN” (eng. On the Slopes), where a player is going downhill and moves the head in order to navigate and catch all the stars. The application launches on March 5, 2016. If Happy Goggles and Fridge VR packs become ‘everyday items’ across the globe, Google’s number of five million shipped Cardboard VR’s will end up being small – Coca-Cola and McDonald’s can drive the VR into tens of millions of units.