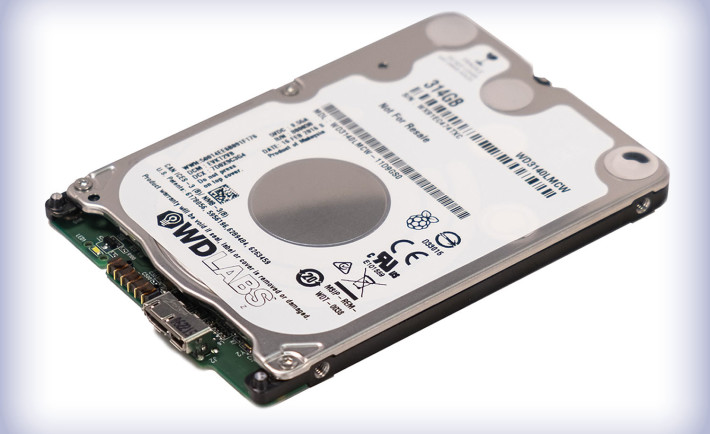 Western Digital surprised Raspberry Pi owners on Monday with the launch of a hard drive developed specifically for the DIY board. Called the WD PiDrive 314GB, the drive is based on the company’s WD Blue slim drive model but features changes that were made specifically for Raspberry Pi. It’s priced at a mere $45.81 although the company is currently dishing out a discount for a limited time only, reducing the price to a cheaper $31.42.

According to the company, the new WD PiDrive 314GB features changes to its magnetic recording and electrical system operating set-points so that it aligns with the Raspberry Pi’s USB data and power design. That means a reduction of the power load while maintaining a maximum USB data transfer rate. The company says this was made possible by using its manufacturing tuning process and platform design flexibility.

The Raspberry Pi-focused drive comes packed with a special version of BerryBoot, a free software platform that simplifies the loading of multiple programs. This version of BerryBoot includes programs that were designed to access mass-storage devices connected to Raspberry Pi. Customers can also install more than one operating system via BerryBoot, which will provide a list of installed platforms at boot-up. Users simply load the operating system of choice with just a “couple of mouse clicks.”

News of the dedicated hard drive arrives after the Raspberry Pi 3 model B was launched at the end of February. This third-generation model packs a 1.2GHz 64-bit quad-core ARM Cortex-A53 SoC, Wireless N and Bluetooth 4.1 connectivity, four USB ports, a full HDMI port, an Ethernet port, a camera interface, a display interface, a microSD card slot, and more. The board costs a surprising $35.

“We recommend the Raspberry Pi 3 Model B for use in schools, or for any general use,” the Raspberry Pi Foundation says. “Those wishing to embed their Pi in a project may prefer the Pi Zero or Model A+, which are more useful for embedded projects, and projects which require very low power.”

WD says that because the PiDrive 314GB draws less power from the Raspberry Pi, it’s more efficient than WD’s other standard drives. Thus, the power-sipping drive should provide lots of space for Raspberry Pi users, allowing them to create their own DIY projects without “breaking the bank.” Naturally, the total accessible capacity will depend on the operating system environment(s).

To get WD’s new PiDrive 314GB, head here. The drive is actually compatible with the Raspberry Pi Model B+, Raspberry Pi 2 Model B, and the new Raspberry Pi 3. Orders will begin shipping on March 30, the company says.