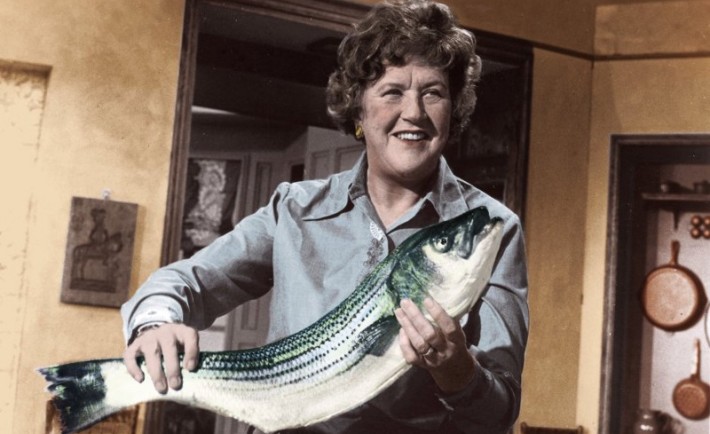 Twitch is probably best known for its game streaming service, allowing gamers to broadcast their gameplay on a number of platforms to millions of viewers. Now the company, which is owned by mammoth online retailer Amazon, has launched a streaming service (TV channel) dedicated to serving up… food! To kick things off, Twitch Creative has launched a Julia Child marathon, broadcasting all 201 episodes of The French Chef that were originally aired on PBS.

“Since the launch of Twitch Creative just five months ago, we have seen some amazing things created live on streams,” writes Noreen McInnis. “From makeup to music, game development to graphic design, we’ve watched broadcasters showcase their creations and build communities around their passions. Broadcasters have found new ways to connect with their viewers by adding Twitch Chat and live feedback to the standard cooking show mix.”

Twitch Creative was established back in October 2015 to officially support the “creative” community. In collaboration with Adobe, the company launched a new landing page that includes a dedicated Featured Video carousel for highlighting interesting broadcasts. There’s also a new tagging system to help broadcasters identify their engaged activity, and updated Rules of Conduct that reflects the company’s official “embrace” of the Creative community.

That said, Twitch Creative is encouraging broadcasters to stream their creative process on the streaming service, whether it’s woodworking, costume creation, composing music, visual art, or any other “artistic” process. Naturally, cooking is considered an “art,” so it’s no surprise that Twitch Creative has launched a channel dedicated to the culinary arts. The company previously ran a marathon of all 403 episodes of the original Bob Ross show, The Joy of Painting.

“All week, we’ll be highlighting great streamers from our community on the @TwitchCreates Twitter, so make sure to send us links and pictures of your favorite streams and your creations in the kitchen,” McInnis adds in Wednesday’s blog.

For cooks wanting to stream their own show on Twitch, simply add #food in the title of the stream and it will be included in the directory of food streams on Twitch Creative. So far the only topics that are showing up include the Julia Child marathon, “Wookie Cookies & Royal Icing,” and “Cooking Chicken Parmesan.” Viewers can use new emotes to provide a visual response including NomNom, ChefFrank, and StinkyCheese.

Amazon purchased Twitch back in August 2014 for a reported $970 million in cash. At the time, Twitch served streaming content to more than 55 million users worldwide, and had more than 15 billion minutes of content available to view. Even more, users reportedly spent more than 100 minutes a day on Twitch, making it a fine catch for Amazon. Business Insider Intelligence even reported that Twitch accounted for 43.6% of all live video streaming traffic on the Internet.

To check out the new Food channel on Twitch, head here. The Julia Child marathon is already underway, so go get your fill of all 201 episodes of The French Chef now for free. Happy cooking!