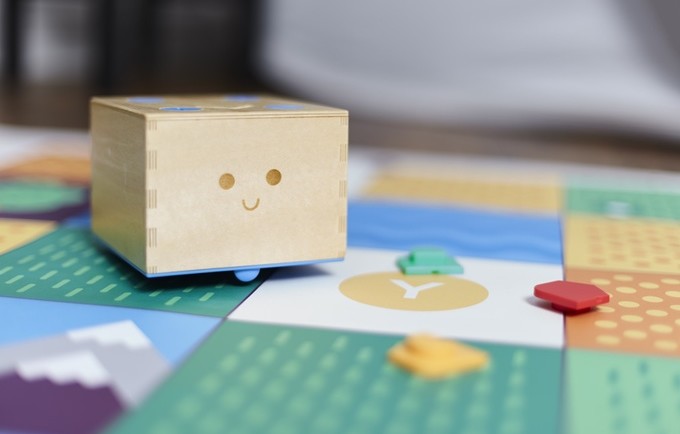 Want your kids to be successful millionaires when they grow up? There’s a cool Kickstarter project called Cubetto that promises to teach coding to boys and girls ages three and up. They create their first program by simply using a colorful set of blocks, meaning kids won’t need the ability to read or speak a specific language. It’s a hands-on experience that, according to the project, combines Montessori learning principles with computer programming concepts.

The Cubetto Playset includes Cubetto, a board, sixteen blocks (four green ‘Forward’, four red ‘Right’, four yellow ‘Left’, and four blue ‘Function’), a 1x1m world map, and a story book. Cubetto is actually a smiling, wooden “robot” based on the Atmel SAM D21 microcontroller that needs to be told where to go, and how the get there. The board serves as a command line, thus when blocks are placed on this board, the robot follows these commands.

That said, the instructions include a main sequence, a subroutine, and a Go button. The developer, Primo Toys, says that there are more than 50 billion sequences that kids can create using the blocks. That seemingly includes what is provided in the Cubetto expansion pack, which contains four additional world maps (Solar System, Water World, Ancient Egypt, Cityscapes), and four story books.

“Our blocks are a new, procedural programming language,” Primo Toys states. “Much like LOGO was back in the 70’s, except you can touch it! Each block is a specific and unambiguous instruction, easy to recognize and combine into a meaningful sequence.”

So how is this method actual coding? The blocks represent a touchable, physical form of an unambiguous instruction. In turn, instructions are put together on the Board’s wavy lines, which represent command lines. Debugging is part of the task too: if the robot doesn’t follow the correct path, the child can fix it. Kids can also create recursions as well as infinite loops using the Function blocks.

To help parents get started, the developer provides an online resource center that includes curriculum mapped activities and games. Currently, this service is in private beta, but parents can check out the teacher’s guide by heading here. Right now there are already a number of groups using the Cubetto coding system including elementary schools, technology clubs, technology camps, public libraries, and more, the developer says.

As of this article, the Kickstarter project has 2,069 backers pledging $466,521 with 20 days still to go. The actual goal is $100,000, meaning the project has by far surpassed the necessary funds to bring this idea into a sellable product. Pledge $145 or more, and you’ll not only receive Cubetto a month before it’s offered to the public, but have your name etched in the firmware. You’ll also receive a lifetime membership to the online resource center.

“We came to solve a problem; making coding accessible, tangible and fun for young learners all over the world. It was a shared passion for design, and impending fatherhood that kicked it all off,” Primo Toys states.

Cubetto is expected to ship to early backers in August 2016. The developer also plans to distribute all Kickstarter rewards by the end of September 2016. For more information about Cubetto, head here.