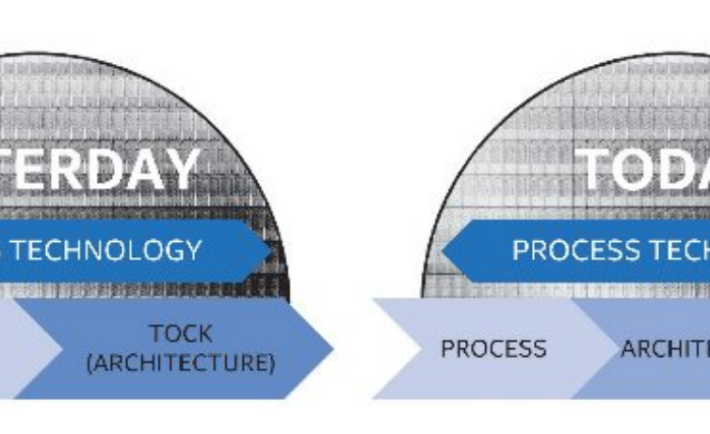 Approximately four years ago, Tick-Tock encountered a first significant hiccup with Ivy Bridge being a 22nm version of Sandy Bridge. Ivy Bridge was the first processor from Intel that we could call APU, instead of a CPU – as 40% of the die was allocated for new graphics architecture. The off-cadence culminated with Haswell-Broadwell-Skylake. Haswell was the new architecture that used the 22nm process but Broadwell was not a 14nm die-shrink of the said architecture. Intel ran into issues with both 14nm process and internal architecture of Haswell. The decision to include VRM circuitry into Haswell resulted in a lot of issues for Broadwell, and in the end the company ditched VRM circuitry for both Broadwell and Skylake.

Sadly, Broadwell did not show a lot of clocking headroom, and the peak clock for the top-end part peaked at 3.3 GHz, 200MHz slower than Haswell-based Core i7 4770K. Thus, Skylake showed up with a top to bottom architectural optimizations, both on the CPU and GPU side. With 60% of the die dedicated to graphics, Skylake is a true Accelerated Processing Unit (APU), or Heterogeneous Processing Unit. Skylake also clocked almost 17% higher than Broadwell.

As you can see on the slide above, in the current 14nm, we have 14nm Tock called Broadwell (BDL), Tick i.e. new architecture Skylake (SKL), and Tick+ – Kaby Lake (KBL), i.e. optimized Skylake architecture. That will be followed by the first 10nm process Tock, codenamed Cannonlake (CNL).

All in all, while Tick-Tock cadence enabled Intel to dominate the market, regular slippages in the roadmap showed how difficult was to keep the cadence going. With the new schedule, Intel is stretching its manufacturing process to three generations, or three to four years. After all, Broadwell-E slipped from Q4 2015 into Q2 2016, and that’s already six months, or two quarters off. There’s also the case of mobile architectures, which are also using 2-3 generations per process node. All in all, Intel knows what they need to finance the development and deployment of new process nodes, for which you have to keep the current processes paid off.

Still, the performance delivered by these processors was the best money could buy. And at the end of the day, that is what matters. In just six months, we will see is Intel going to stay the dominant processor manufacturer (in terms of ultimate performance), or not.