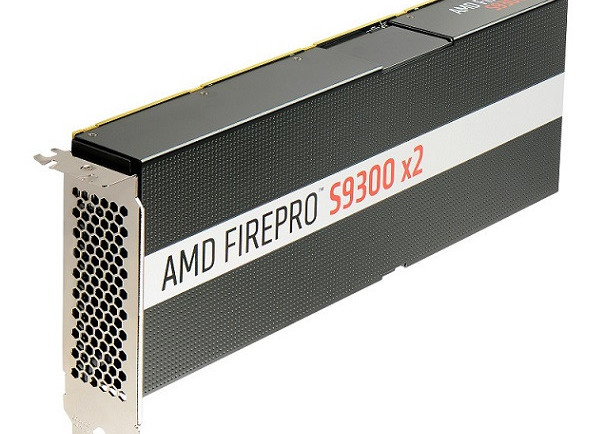 Recently, we posted an in-depth story detailing the birth of Radeon Pro Duo. As we all probably know, AMD created two designs for the dual Fiji GPU. In the end, AMD brought just a single design to market and a server grade one to boot.

The company just introduced the FirePro S9300 X2, sharing the same server-grade design as the Radeon Pro Duo, with the main difference being that the FirePro model was clocked down in order to allow for optimal operation using server-grade air cooling. Given that S9300 X2 is rated at 46 GLOPS/Watt and operates within 300 Watt thermal limit (302W to be precise), the card delivers 13.9 TFLOPS of single-precision, and puny 868 GFLOPS double-precision.

Built in 8GB of HBM memory achieves a combined bandwidth of 1TB/s, making this a first 1TB/s product on the market. Internally, the Fiji GPU architecture achieves even higher numbers but this is the first time we should see a combined thread benchmark exceeding 1000 GB/s.

By looking at the 2015-class GPU architecture, it looks like both AMD and Nvidia pushed Fiji and Maxwell designs for FLOPS/Watt and not double-precision for HPC (High Performance Computing) tasks, leaving a space for Intel to swoop in with the 6 TFLOPS SP/ 3 TFLOPS DP offered by Xeon Phi “Knight’s Landing”. Focus on single-precision reaps rewards when it comes to emerging trends in the supercomputing field, like the deep learning / AI or large scale research that could not have been done before. For example, AMD’s S9300 X2 product announcement comes through a design win for the Canadian Hydrogen Intensity Mapping Experiment (CHIME).

The goal of CHIME is nothing short of impressive, and impossible to achieve without the power offered by the GPGPU platform: “The CHIME project was created to investigate the discovery that the expansion of the Universe is speeding up rather than slowing down. Using consumer technologies similar to those found in common radio receivers, the telescope collects radio waves that have travelled through space for up to 11 billion years and feeds them into a massive supercomputer powered by a series of AMD FirePro S9300 x2 GPUs. The intense number crunching required to map the Universe’s expansion in this way was previously cost-prohibitive, but is now being enabled by AMD FirePro GPUs. The anticipated results will help create a highly-detailed map showing the intensity of the hydrogen radiation from billions of galaxies, which will help scientists understand the accelerating expansion of the Universe.”

The way how CHIME generates data represents a new step in science, as the contemporary scientists are moving away from conventional radio telescopic concept which requires building massively expensive dish-shaped telescopes. CHIME consists out of “four 100-metre-long cylindrical reflectors which cover an area larger than five professional hockey rinks and gathers signals for the critical computational analyses.”

“CHIME faces an extraordinary computing task, but with the onset of previously unavailable technology and tools such as the AMD FirePro S9300 x2 GPU, we now have the computational power, bandwidth, and efficiency to make this data analysis possible to study the impact of dark energy on our Universe,” said Professor Keith Vanderlinde, of the Dunlap Institute for Astronomy & Astrophysics at the University of Toronto. “Our research is the result of the combined efforts of dedicated hardware, compute software and scientific research. We’re very appreciative of the supporting efforts from AMD in this project.”

Just like SKA (Square Kilometer Array), which is being built in Australia and South Africa, CHIME is using multiple sources and then harvests the power of GPU-accelerated supercomputing cluster to merge data and achieve usable results.

“We’re proud to participate with the CHIME project in this cosmic opportunity to map the evolution of the Universe. The applications of instinctive computing are expanding rapidly as seen in this fascinating CHIME project, through the use of powerful graphics compute capabilities,” said Greg Stoner, senior director of Radeon Open Compute, Radeon Technology Group, AMD. “Not only is the new AMD FirePro S9300 x2 Server GPU the world’s fastest single-precision GPU accelerator, it is also the world’s first professional GPU accelerator to be equipped with High Bandwidth Memory and the first to fully support the Radeon Open Compute platform – an integral element of the GPUOpen compute initiative.”

AMD cites the single-unit price for the FirePro S9300 X2 at $5,999 – or four times as much as the Radeon Pro Duo. Still, we’re glad to see that AMD is no longer undercutting Nvidia’s Tesla and goes head to head in terms of pricing as well. If given a chance, FirePro S9300 X2 does have the potential to impact the company bottom line, and more importantly, impacts the global science.