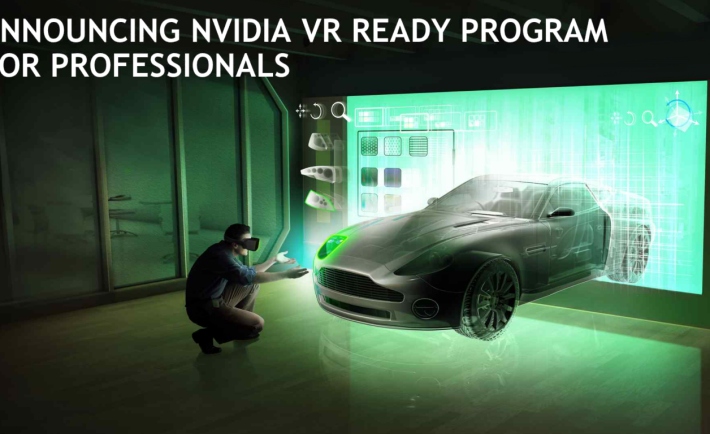 Over the last couple of weeks we’ve seen a number of companies pronouncing that their ‘Mobile First’ strategies are dead, and they’re shifting their focus to develop a ‘VR First’ mindset. Good examples are Samsung, and CryTek approaches, which should lead to an ubiquitous adoption of VR experiences such as Six Flags roller-coaster experiences or movie-becomes-a-VR-experience. With the early success of HTC Vive, Oculus Rift and many other 3rd party vendors looking to find their their place under the (virtual) Sun, content creators are turning their focus on producing content for Virtual and Mixed Reality.

Almost all of the content creation is done on a PC, most notably high-end (workstation) systems. Both AMD and Nvidia developed their VR middleware geared towards the consumer, with Liquid VR and VRWorks. AMD made a good step forward by launching Radeon Pro Duo, mixing the fastest Radeon graphics processor with professional FirePro drivers for content creators. This is certainly bound to ruffle a lot of feathers, as consumer and professional families are separated by a different price bracket and the level of customer support, driver profiles and so on.

At the 2016 GPU Technology Conference (GTC), Nvidia laid an outline on how are they going to address the rising need for certified VR systems for content creation. In order to find out Nvidia’s strategy for VR, we had a talk with Mr. Sandeep Gupte (Senior Director, Professional Graphics Business at Nvidia), and Mr. Michael Kaplan (Global Leader, Media & Business Entertainment Business Development, Nvidia). 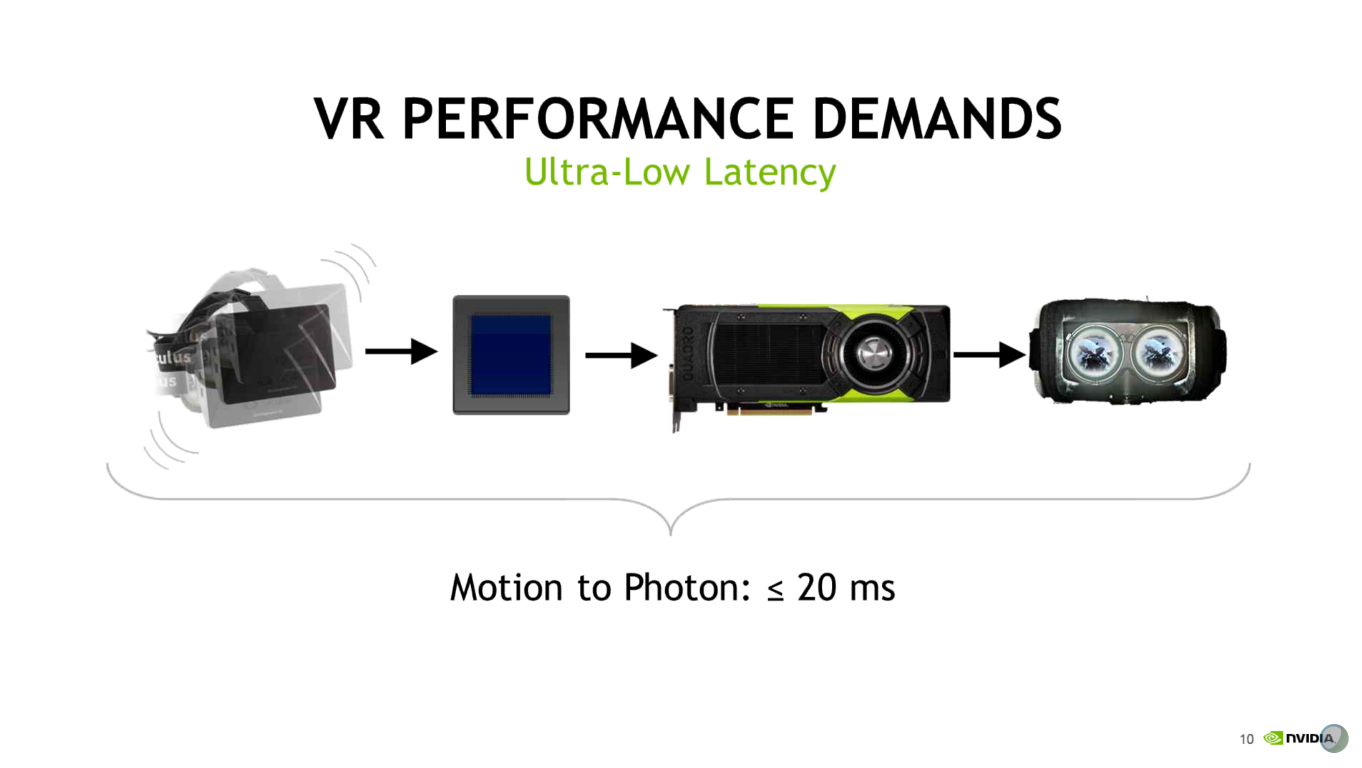 First and foremost, all of the initial VR content is geared around one thing: no matter what are you working on, your motion to pixel or motion to photon has to be under 20 milliseconds i.e. achieve a refresh rate of 90 frames per second. While there are several tricks we’re now hearing, such as going for 45 fps – the hard side of virtual reality is bound by the physics of our biological sensory system i.e. eyesight (space) + hearing (source location) + feeling (movement).

Given that professional hardware typically comes in with 5-10% lower clocks than gaming counterparts, Nvidia had to adopt an aggressive optimization approach to its own VR Works to make sure that the target frame rate is achieved. It’s quite pointless to create a VR experience which you cannot try on the system you’re working on, as it has the potential to create motion sickness with the person operating the said workstation.

Second challenge is one much more difficult than first – get those pixels through the GPU: 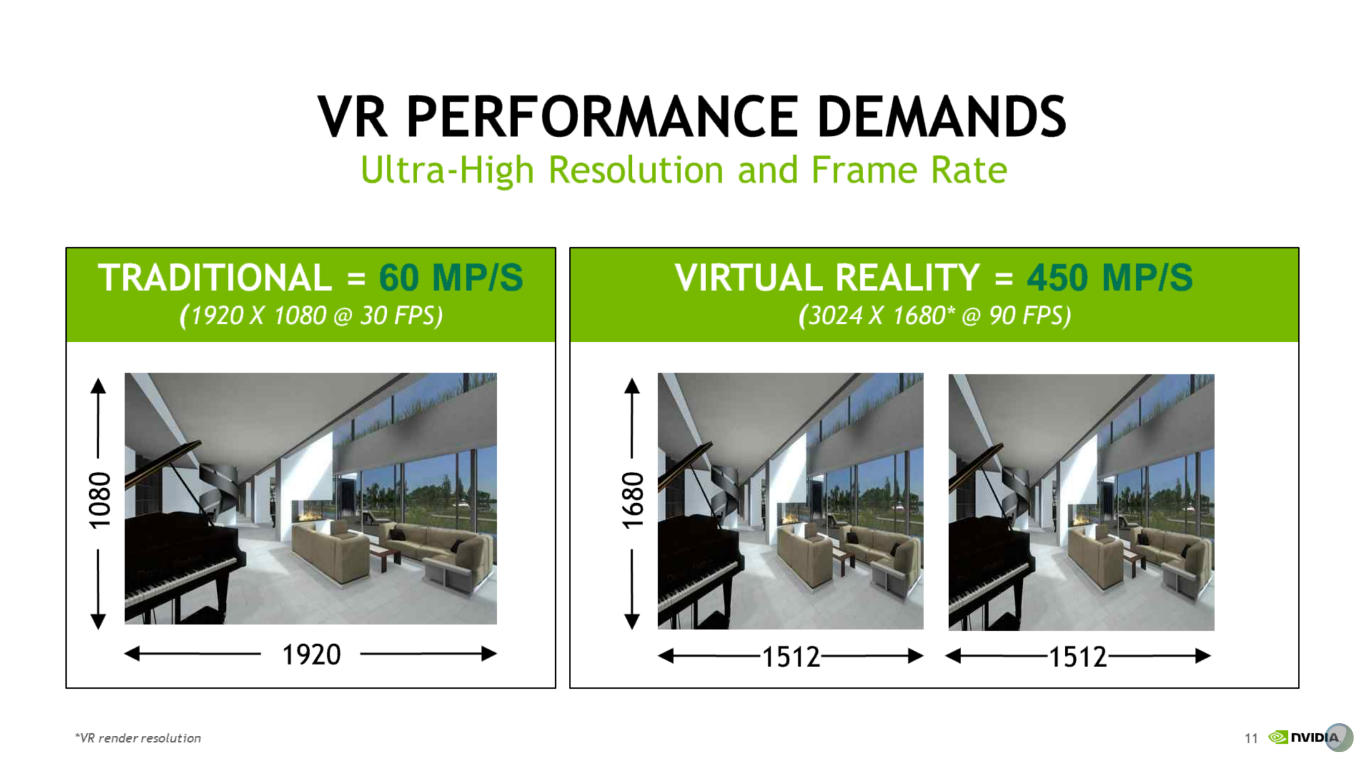 Even though VR needs roughly 8% less pixels than 4K, the GPU has much less time to output those pixels. To be more precise – 50% less time, as it operates on a 50% higher refresh and the frame rate has to match the refresh rate (Vsync). The future might bring us ‘trickery’ or ‘tweakery’ approaches such as Nvidia’s own Adaptive Vsync, but for now – no one dares to do anything that could kill VR at its own start with the motion sickness issue. 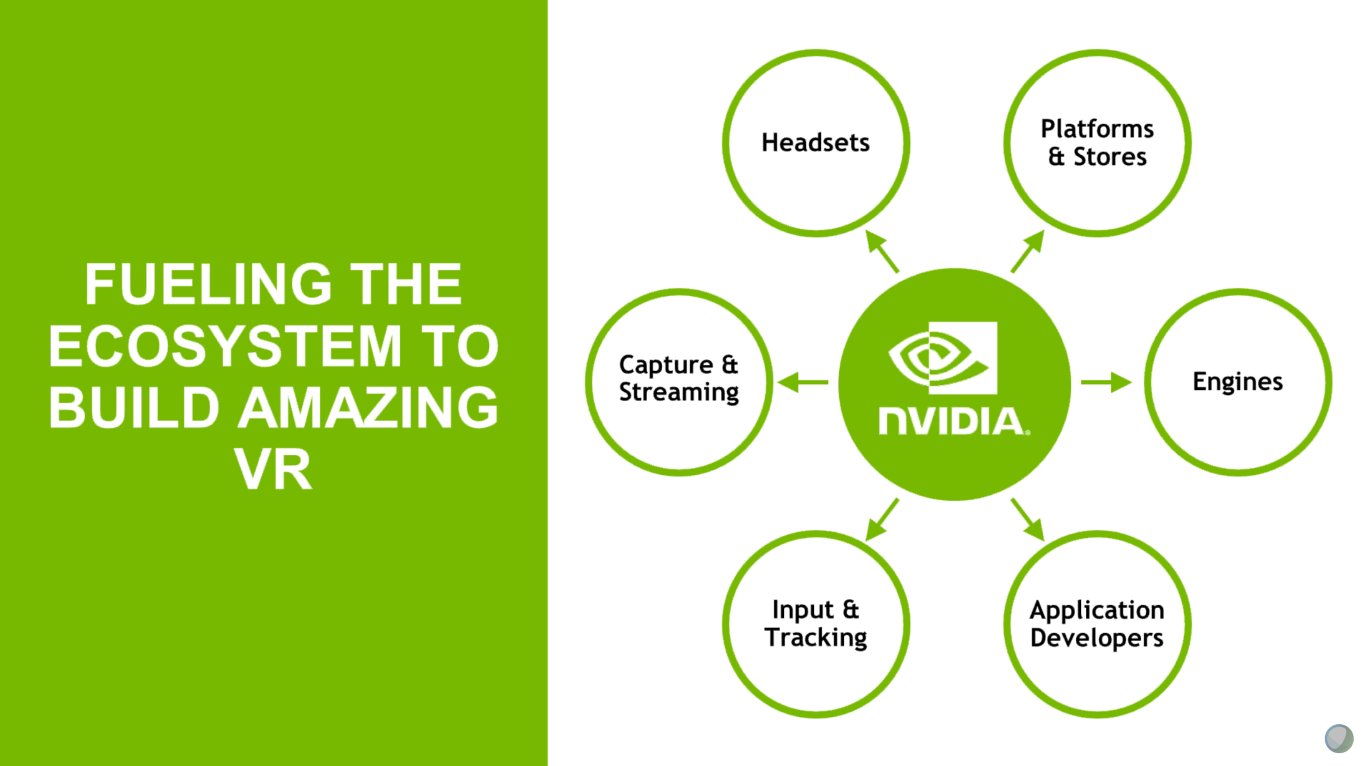 In order to address the concerns, Nvidia created an approach to he VR ecosystem in six stages, and is pushing this approach through GeForce and Quadro product line-ups. Unlike its competitors and multi-generational GPU architecutre support, Nvidia decided to tailor its own VR system around the Maxwell GPU architecture. On the consumer side, we have the GeForce GTX 970 and above, while the Quadro ecosystem starts at M5000. The systems based around this architecture are then recommended and delivered to the members of the ecosystem through hardware and engineering support in order to optimize

While it is unsaid, the content created on Maxwell GPU architecture is expected to excel on Pascal architecture, which is going to be officially introduced during the first day keynote at the 2016 GPU Technology Conference (Twitter: #GTC16). Nvidia considers high-end Maxwell architecture essential to creating an experience the consumers can enjoy on mainstream Pascal hardware when it becomes available during 2016. One such example was the recent launch of Quadro M6000 24GB, which doubled the memory from the original M6000 – enabling you to tailor the content for GeForce graphics cards with 4, 6, 8, 12 and 16 GB of video memory. 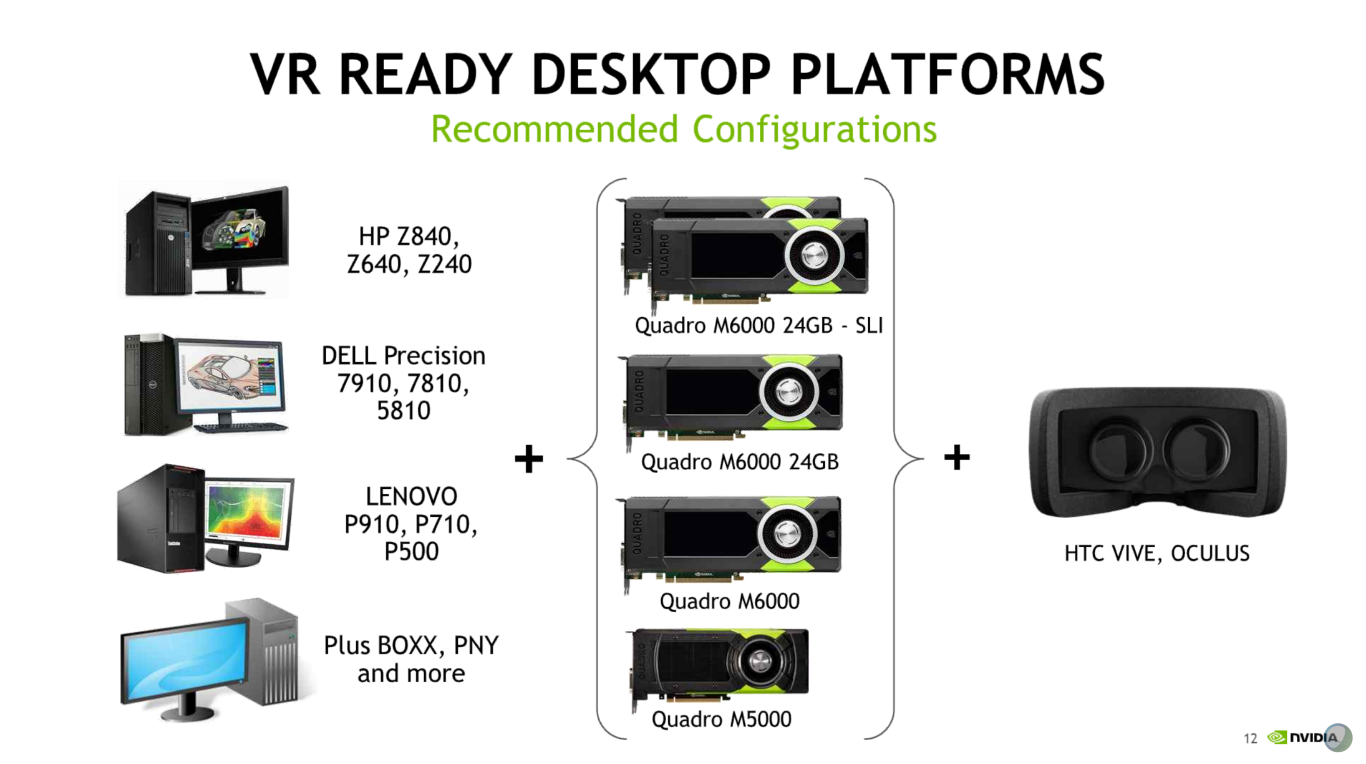 As you can see on the slide above, content creation is recommended from the mainstream workstation manufacturers such as Dell, HP and Lenovo, while the boutique vendors such as BOXX Technologies & Co can develop custom, often overclocked workstations which push the boundaries of what can a content developer do.

But, Nvidia decided not to stop at desktop workstations, as it is introducing a new graphics processor for mobile workstations. 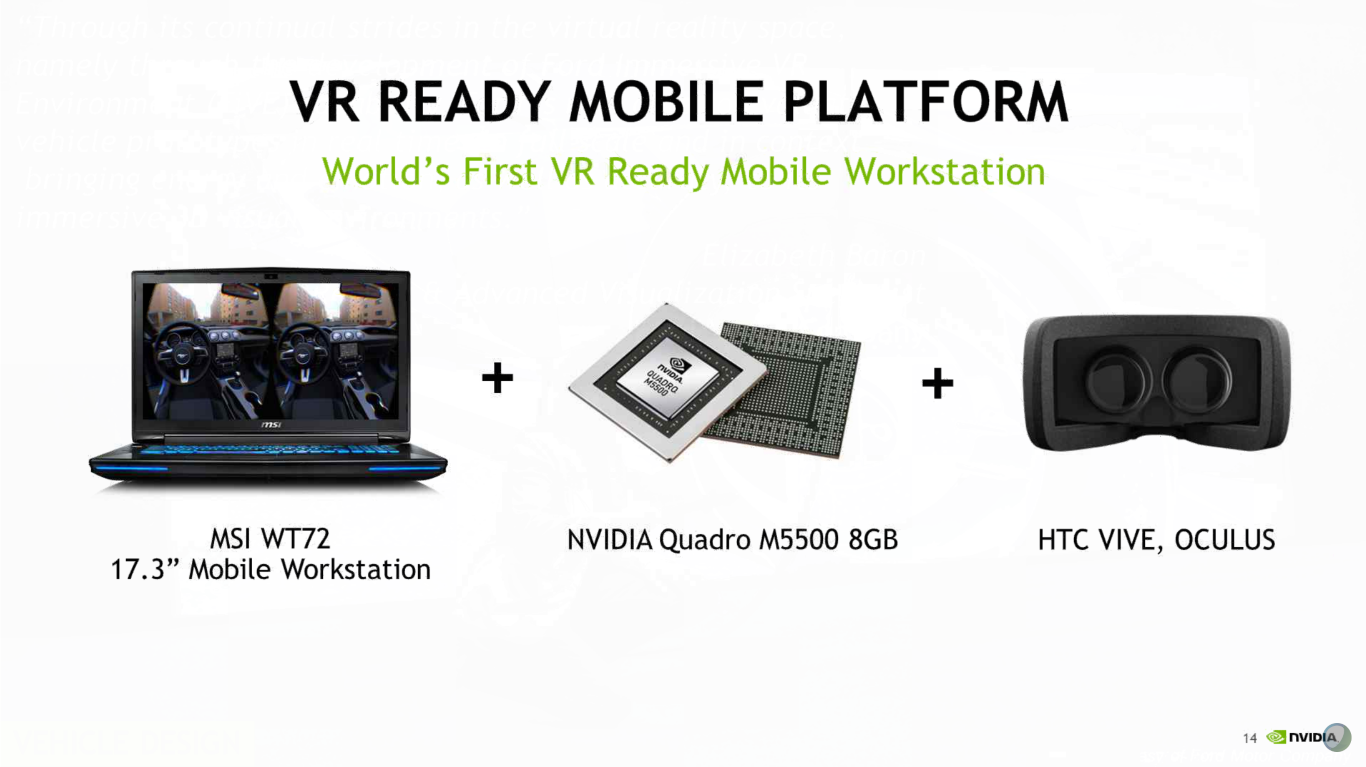 MSI offered what we would call a smart approach to designing a product: the company designs a mobile gaming PC (GT72 Series), tweaked for maximum performance and then goes and takes the optimized chassis and makes it a workstation capable part (WT72 Series). By offering Xeon processors and Quadro graphics, as well as enterprise-grade memory and storage subsystems, you can take the ultimate mobile performance on the go – and drive as much as three 4K displays from a single laptop.

WT72 is a high-end mobile workstation with a 17.3″ display, Skylake-based Core i7 or Xeon E5 v5 proessor, paired with a brand-new Quadro M5500M GPU with 8GB of GDDR5 memory. The previous high-end, Quadro M5000M peaked at 1536 cores, and was considered a professional version of GeForce GTX 980M. Quadro M5500M 8GB represents the fastest mobile Quadro you can buy, featuring 2048 CUDA cores (professional version of GTX 980).

This notebook also packs Killer E2400 networking processor, even though we would have loved to see the notebook packing the Killer Wireless tech as well, which is now based on the conventional Intel 8260. Still, the storage subsystem can offer as fast as 5GB/s read speed (dual M.2 NVMe design), when paired with the fastest SSDs money can buy.

Naturally, all the hardware power is nothing without optimized drivers and applications in the ecosystem. The goal of VR Ready Professional program is to enable you to get the best hardware Nvidia can offer, while VRWorks is a software package for different application purposes. 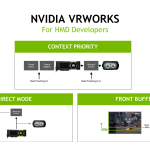 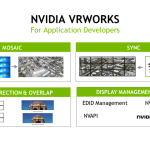 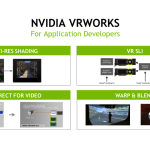 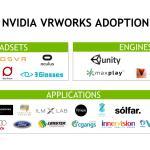 As you can see in the gallery above, VRWorks represents a set of software tools to enable hardware and software vendors to optimize the VR experience for the users of their future products. From different rendering techniques to the way the production pipeline looks, Nvidia’s toolset pitches themselves as the ‘go to’ solution for VR development. Right now, we have a split in the approaches between AMD’s LiquidVR and Nvidia’s VRWorks, but most of the software vendors we are seeing are using both to make sure experience runs best on all the available VR-compatible platforms.

Overall this is good, but an expensive approach to creating VR content, and time will tell how much market share can VR Ready Professional and VRWorks capture from the users that currently use consumer products such as GeForce, or the competition. The GPU Technology Conference is demonstrating a lot of products which are coming out of the VR Ready and VRWorks programs, and you can follow our coverage on of the conference on our site, and through our social media channels.