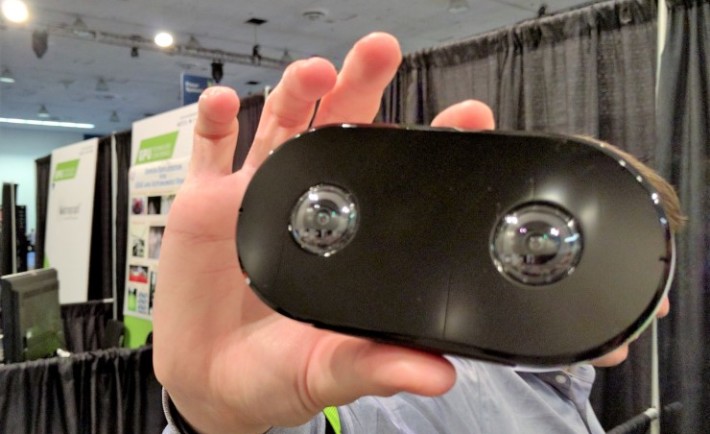 Raising capital is never easy, even if the idea you have might be a revolutionary one. If your idea is a piece of hardware, raising capital in a software-driven industry is extremely hard, but not impossible. Case in point is Lucid VR, a tiny startup launched by a Berkeley and Stanford graduates.

During the GPU Technology Conference, we met with Han Jin and Joe Hill from Lucid VR. Han is a co-founder and CEO of Lucid VR while Joe is a chief hustler, i.e. company evangelist. Described as “world’s only 3D 180-degree Virtual Reality camera”, LucidCam is a combination of innovative hardware design and software that enables instant watching of VR Content using Apple iOS and Google Android.

Their quest for funding was more difficult than software-only developers, as software startups will typically ask for $.5-1.0 million in initial funding, while Lucid VR had to complete a $2 million seed run in order to fulfill the tooling, start manufacturing etc.

Just a week after the finish of the GPU Technology Conference, Lucid VR announced that they received $2.1 million in Seed round lead by Wistron, S2 Capital, Lab360, TEEC Angel Fund, 17 Miles Technology and a number of private angel investors. The key investor for the company is a manufacturing agreement with Wistron, one of world’s largest ODM (Original Design Manufacturer) that will be in charge of bringing the camera concept to life.

“LucidCam brings people together across the world by capturing incredible immersive experiences in VR, the same way as your eyes see them, and which can be easily shared with friends and family within seconds,” said Han Jin, co-founder and CEO, Lucid VR. “With our relationship with Wistron we will be developing a beautifully designed and engineered camera that is going to surpass our original plans. We are very excited to announce that we will be upgrading our backers with a first production version of the LucidCam with double the resolution and frame rate, in addition to extended battery capacity. The viewing experience in VR headsets will be so much smoother with 2K and 60 frames per second.”

This is second round of investments, after the company successfully completed its Kickstarter campaign, which slowly but certainly, is becoming a good path to bringing hardware products to life, and ultimately receiving conventional seed / Series A / B / C funding. Time will tell will for Series A, Lucid VR turn to crowdsourcing through platforms such as SeedInvest. After all, in a crowdfunded Series A, VR platform startup Virtuix attracted over $4 million.