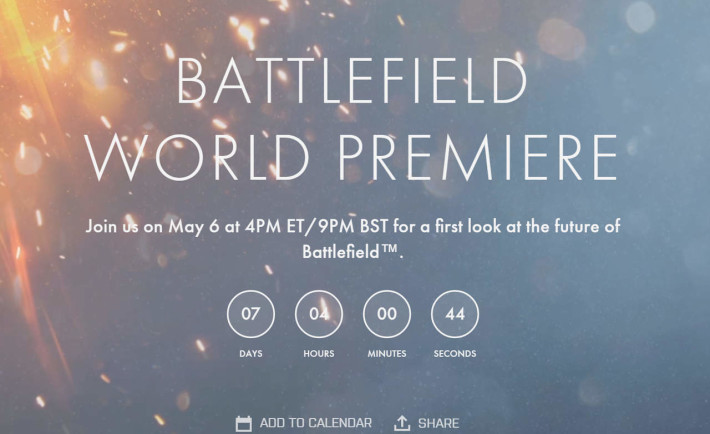 EA today launched a landing page for the World Premiere of next generation of Battlefield. On May 6th, 2016 at 1 PM Pacific, 4PM Eastern and 9PM British Summer Time, Electronic Arts will hold a live stream announcing the Battlefield 5. This will be the 11th title since this franchise launched in 2002, and probably the most expected one. Star Wars: Battlefront was quite a disappointment and not a single Battlefield title managed to beat Call of Duty from the throne of annual-to-bi-annual franchises that storm the bestselling charts.

At the same time, Nvidia is hosting its secretive meeting where the selected invitees will be introduced to GP104 and GP106, second and third chip based off the Pascal GPU architecture. While the big chip, GP100 launched as Tesla P100 and won’t see the world of PC gaming / workstation until first half of 2017, GP104 and GP106 are the chips that will ‘bring the honey’ for Nvidia as both GeForce and Quadro boards, making sure the company keeps the leading market share.

If nothing changes at the last minute, the GP104 will be branded as GeForce GTX 1080, succeeding the GeForce GTX 980.  This 300+ mm2 chip represents to the GeForce GTX line-up what GeForce GTX 680 meant for the company. More compute power within a small power bracket represents the part that AMD ‘forgot it exists’, as we witnessed in a recent story on Ars Technica. Fully featured chip should pack about 2500 CUDA cores, or about 1300 less than the big GP100 chip. Still, it will bring a significant boost when compared to the 2000+ in the current GeForce GTX 980 (not the Ti version). The cut down version of the chip will come to market as GeForce GTX 1070.

Memory used is GDDR5 or GDDR5X, depending on the particular SKU, controlled by the 256-bit memory controller inside the GP104 chip. Nvidia was pairing GP104-200-A1 with GDDR5 memory, and GP104-400-A1 with the GDDR5X chips, which could even mean that GTX 1080 will pack GDDR5X memory – we doubt Micron has production capacity to deliver GDDR5X chips in higher volume than a single ‘high-end mainstream’ product. The GP106 is another story, as this chip will go head to head against AMD’s Polaris 11. This chip belongs to the GeForce GTX 1050/1060 family and will only use the GDDR5 memory until the availability and pricing changes.

It looks like Nvidia is laying down the gauntlet before AMD pulls the big move on Polaris 10 and 11, during Computex Taipei and E3 2016 in Los Angeles, CA. The only remaining mystery is the price, but we believe GTX 1080 will retail for $449-499, with GTX 1070 setting you back for $379-399. Should AMD’s Polaris 10 i.e. Radeon R9 490 prove a performance competitor, Nvidia will have a strong battle on their hands, as AMD is aiming to undercut Nvidia by $50-100 per chip. Margin pressure just might result with Nvidia being pushed into a last-minute pricing change – meaning 2016 is shaping to be an excellent year for VR graphics, since eventual $399 card might be a better VR product with VR SLI and VR Crossfire – 2-GPU solutions – than getting one beefy chip.

Battlefield 5 and Pascal-based GeForces are coming, are you ready?