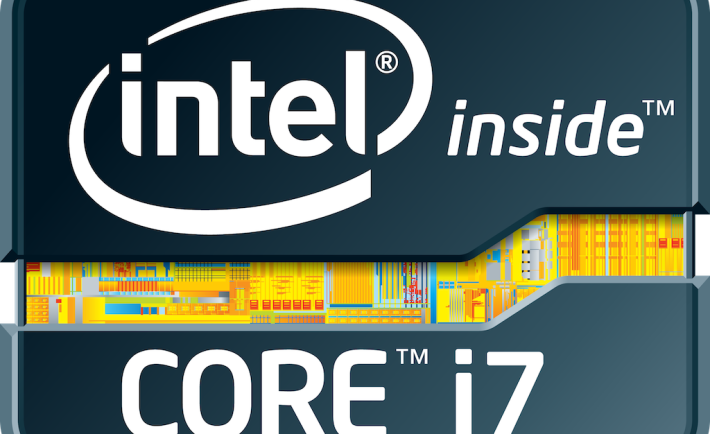 Over the course of 2016 and 2017, Intel will introduce two new architectures for the desktop platform – Broadwell-E and Kaby Lake. Broadwell-E will succeed the venerable Haswell-E as a drop-in replacement for the X99 platform. On the other side, Kaby Lake is Intel’s third (and last?) processor architecture that uses 14nm FinFET process.

First to launch will be Broadwell-E processors in six-, eight- and ten-core versions (sexa-, octa-, deca-core). Branded as Core i7-6800 and i7-6900 Extreme Edition series, these processors represent the best Intel can offer to the market. The company adopted a two-fold approach; i7-6850K, a six-core processor for ultimate overclockers clocked at 3.6 GHz. The second one is a ten-core  i7-6950X, clocked at mere 3.0 GHz. Thanks to Overclockers Network and Silicon Lottery, we managed to get the first glimpse into the expected performance of the highly anticipated products. 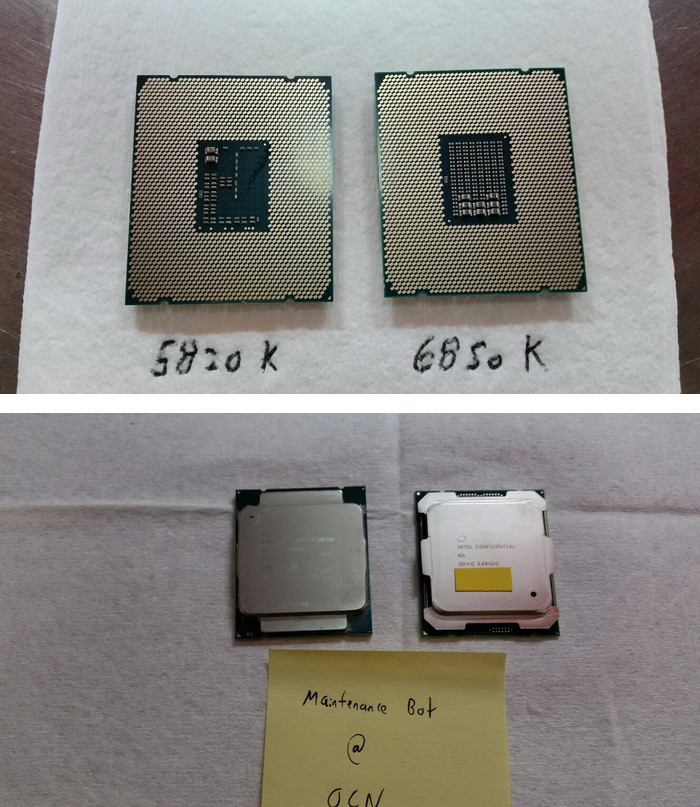 First images of the Broadwell-E processors reveal that Intel made a significant change to the IHS (Integrated Heat Spreader). Fiberglass substrate used by Intel reduced in thickness by 67%, from 1.87mm to mere 1.12mm. This packaging ‘diet’ was compensated with a significantly beefier IHS, which should help cooling down the silicon die better than ever. It also makes popular delidding more difficult, as it is easier to damage the packaging and ruin the processor. 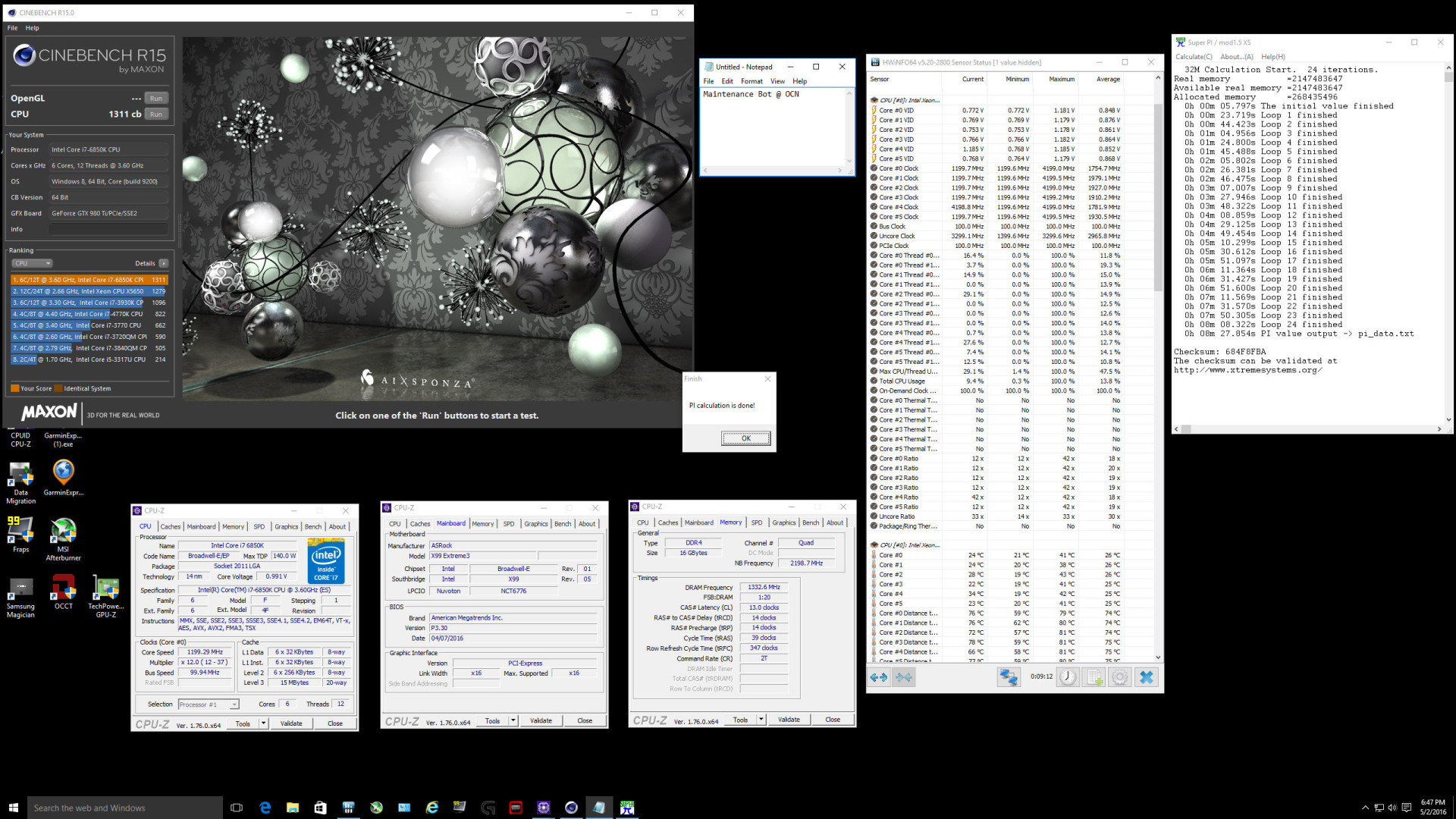 OCN user “Maintenance Bot” proceed with benchmark results, comparing the comparable processor from the previous gen with the current one. The results are as follows (new Core i7-6850K vs 5820K):

As you can see for yourself, the initial results don’t show much. Broadwell-E isn’t all that faster against predecessor. Naturally, we will wait with any conclusions when we get our own samples, and perform independent testing using our in-house platform.

Even though it is not the highest clocked part, we predict the i7-6950X should prove to be one of most popular processors. First consumer-grade 10-core apparently likes to achieve very high clocks, once you move away from the artificially imposed 145 Watt TDP limit. Broadwell-E was originally designed as a 180 Watt processor, with concerns about the servers bringing down the power to a more manageable level. However, if your system can deliver 180-200 W, the 6950X should deliver 3.5-3.6 GHz clock and more.

The initial test results are quite promising, showing a bigger performance lead against is predecessor (unlike the 6850K). Silicon Lottery, a website that sells cherry picked / speed binned processors for a price premium just published the results on their engineering sample or i7-6950X. Do note that according to Intel, all processors marked “Intel Confidential” are considered property of Intel Corporation. Regular speed binned processors that Silicon Lottery sells are just fine, but “Intel Confidential” is not something we would recommend buying. Then again, we know more than one enthusiast whose titles today are “Director of Product Design” who gained their initial capital by selling those, and Intel never did a single thing about it.

Just like the previous leak, Silicon Lottery used Overclock.Net to publish the initial results. Sadly, the overclockers ran all benchmarks at 4.0 GHz overclock, meaning we cannot compare this against stock clocked processors:

This is the first time we’re seeing a product which managed to go past the 2 TB/s barrier in L1 cache testing. In fact, L2 cache is as fast than L1 cache on high-end consumer grade mobile processors. Cinebench R15 scored 1904, but again, this is the result at a clock of 4.0 GHz. 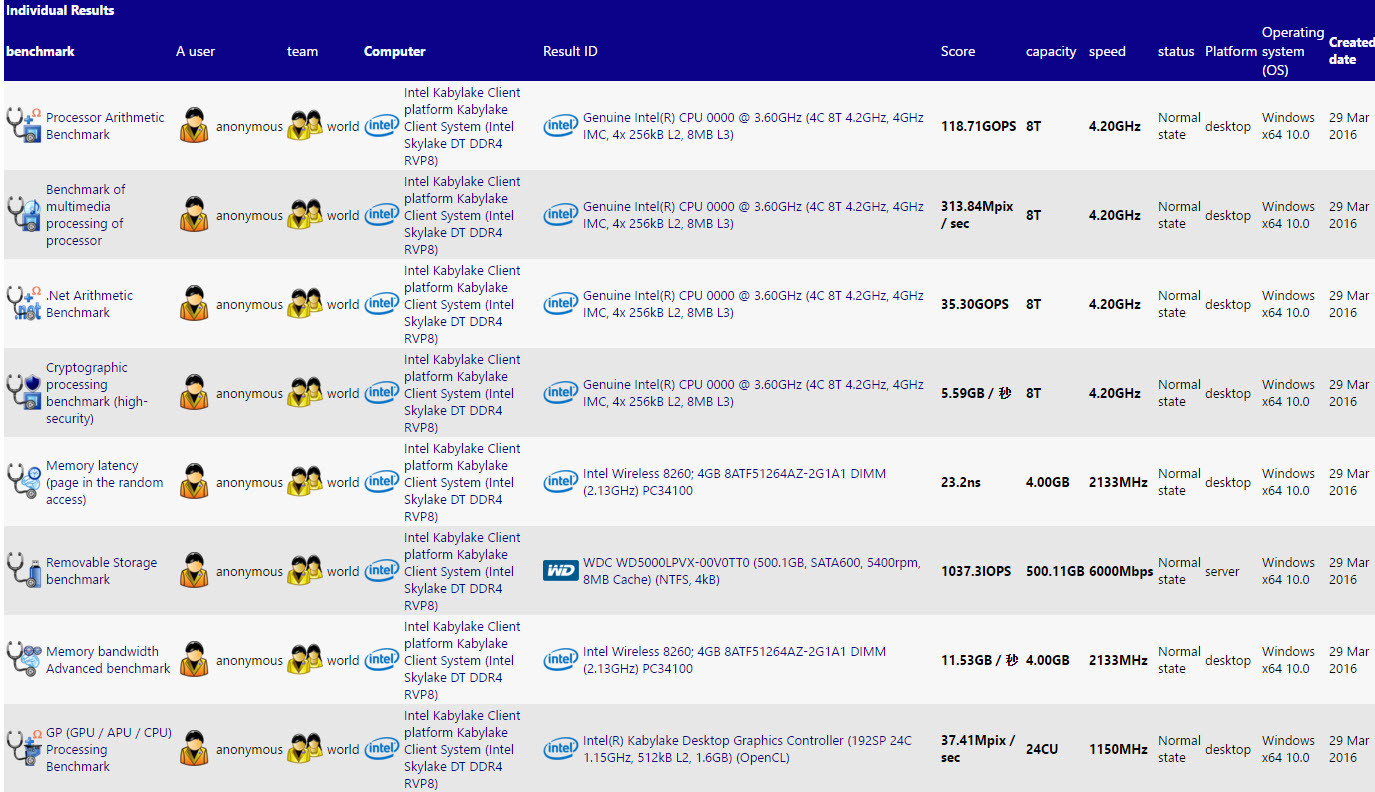 Last but not least, we bring you the initial performance tests of Kaby Lake i.e. Kabylake, successor to current 14nm Skylake architecture. Kabylake processors will come to market as Core 7000 Series. The leaked results reveal that Core i7-7700K i.e. Kabylake-D will be quite similar to current Skylake-D. Both processors have four physical cores, eight threads, 1MB of L2 cache and 8MB of L3 cache. Integrated graphics processor will continue to feature 24 compute units, clocked at 4.0 GHz with 4.2 GHz Turbo mode.

Unlike previous leaks, this comes from the official database belonging to SiSoftware, makers of popular SiSoft Sandra 2016 suite.