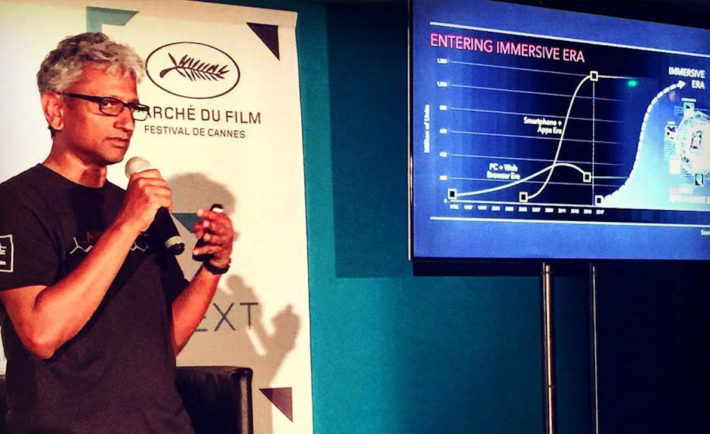 With the arrival of Baahubali: The Conclusion in April 2017, the world of Bollywood movies might change forever. At the 69th edition of Cannes Film Festival, movie producers sat down to discuss the arrival of Virtual Reality into the movie industry, in a bid to change the industry paradigm. Up until last year, most of movie industry spoke of ‘second screen’ i.e. engaging the movie goers by offering additional content on their favorite device (tablets, smartphones etc.).

With virtual reality, the paradigm shifts from the ‘second screen’ concept into transporting movie goers into the actual movie world. While real-time interactive movies are still a good decade away, the so called ‘third wave of computing’ is attracting a lot of attention because it enables the movie studios to use the same digital assets in order to achieve yet-unseen levels of immersion.

Shot as a Baahubali a duology, this AAA-level production targeting to expand beyond Bollywood. Baahubali: The Beginning became the highest grossing Indian movie of all times, with over 4500 VFX shots, and the production is looking to double down with Baahubali: The Conclusion. This will be extended with a third part, a VR movie experience which will rely on assets and the story from the movies. As a part of promotional efforts, a panel was organized between movie producers and AMD, who is a technical partner of the production.

“We’re now about to enter the third era and we call that the immersive era. And this immersive era will be powered by game engines which sounds surprising to a lot of people. If you know the details of what a game engine is – game engines have amazing pieces of software in which there is great graphics, great physics, great AI, great networking – everything you can imagine for the next generation of experiences are already in this game engine. They are powerful pieces of software. And they’re all built on top of the GPU. So game engines and GPUs are going to bring us into this third era.” said Raja Koduri, Senior Vice President and Graphics Architect, Radeon Technologies Group, AMD. “What do we want to achieve with VR? Where are going with VR? The real ultimate goal is that we want to achieve this thing called full immersion. It’s not just visual sight – which is what we’re focusing on now – we’ve got to get the sound right. We’ve got to the rest of the senses like touch, feeling, and temperature – all the senses have to come together. To achieve this vision, our goal, as a hardware technology manufacturer, is to use all the computing power we have to be able to achieve these things.”

You can see the whole panel on Facebook, on the Baahubali Movie Fan Page. Ultimately, digital assets such as ones constructed in Baahubali movie are VR Ready, to have a movie rendered in a game engine such as Film Engine from Crytek – and create VR movie, VR movie experiences – is something that probably will end up driving the adoption of Virtual Reality in mainstream.

If you are wondering why Baahubali is so important for the Indian, and independent movie industry – look at the special effects and take into account that outside Hollywood, even China and India can only dream of producing a movie with a $200 million budget. Still, extending the experience with a VR movie, reusing the digital assets, storyline and even digital versions of the actors themselves should help to recouperate the ever-rising cost of movies.