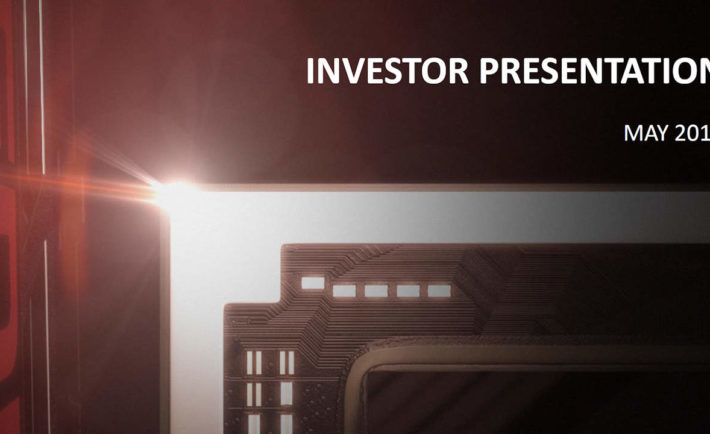 During the recent 2016 Annual Shareholding Meeting, AMD’s leadership disclosed their targets for the upcoming three years. The company is building its strategy on the only possible growth plan – building the fastest technology their engineers came come up with, and then produce the silicon which will come to market branded either as AMD, an AMD-THATIC joint-venture or as Microsoft, Nintendo, Sony… and a new mysterious client for the semi-custom business.

“We have new Semi-Custom business in the back half of the year that commences then, and we have the traditional Semi-Custom business with our game console partners that seasonally peaks in the third quarter. So a solid momentum, as we transition into the third quarter.” said Ruth Cotter, Chief Human Resources Officer and Senior Vice President, Corporate Communications and Investor Relations, AMD.

Given that all three gaming console players plan to announce new strategy for their products, we’re not surprised to hear that there is a fourth customer that is also entering the arena. We already disclosed the preliminary specifications of the upcoming PlayStation Neo console. based on Sony’s own devboxes which are shipped out to their own ecosystem. Now, Microsoft is not holding back, with rumored plan to release a smaller version of Xbox One, as well as initiate a 2-3 year hardware refresh cycle to align with traditional telecom contracts (18, 24, 36 months) – rather than sticking with one console for a long period of years.

Taking everything into consideration, there is an awful lot riding on the new ZEN architecture and its variants (Zen+, Zen Lite), as well as on the Polaris and Vega GPU architectures. What is unannounced should be the upcoming highest-performance APU of all times, which will combine ZEN with a GPU core and HBM memory using MCM (Multi-Chip Module). You can download the 2016 edition of AMD investor presentation here, while we will highlight what we consider as the most indicative slides.

In a recent interview with Ars Technica, Roy Taylor, Raja Koduri’s right-hand man in the newly formed Radeon Technologies Group (RTG) stated that the goal of AMD is to increase the TAM (Total Addressable Market): “The reason Polaris is a big deal,” continued Taylor, “is because I believe we will be able to grow that TAM significantly. I don’t think Nvidia is going to do anything to increase the TAM, because according to everything we’ve seen around Pascal, it’s a high-end part. I don’t know what the price is gonna be, but let’s say it’s as low as £500/$600 and as high as £800/$1000. That price range is not going to expand the TAM for VR. We’re going on the record right now to say Polaris will expand the TAM. Full stop.”

According to AMD’s own presentation, Polaris GPU architecture targets a $35 billion market, which are significantly downplayed figures. Both ‘Gaming’ and ‘Immersive platforms’ bring ZEN and Polaris into focus, to be followed closely by the high-end “Vega” GPU architecture. As recent rumors are surfacing, the leaked performance of initial Vega silicon is spurring a lot of rumors on “GP102” chip from Nvidia. 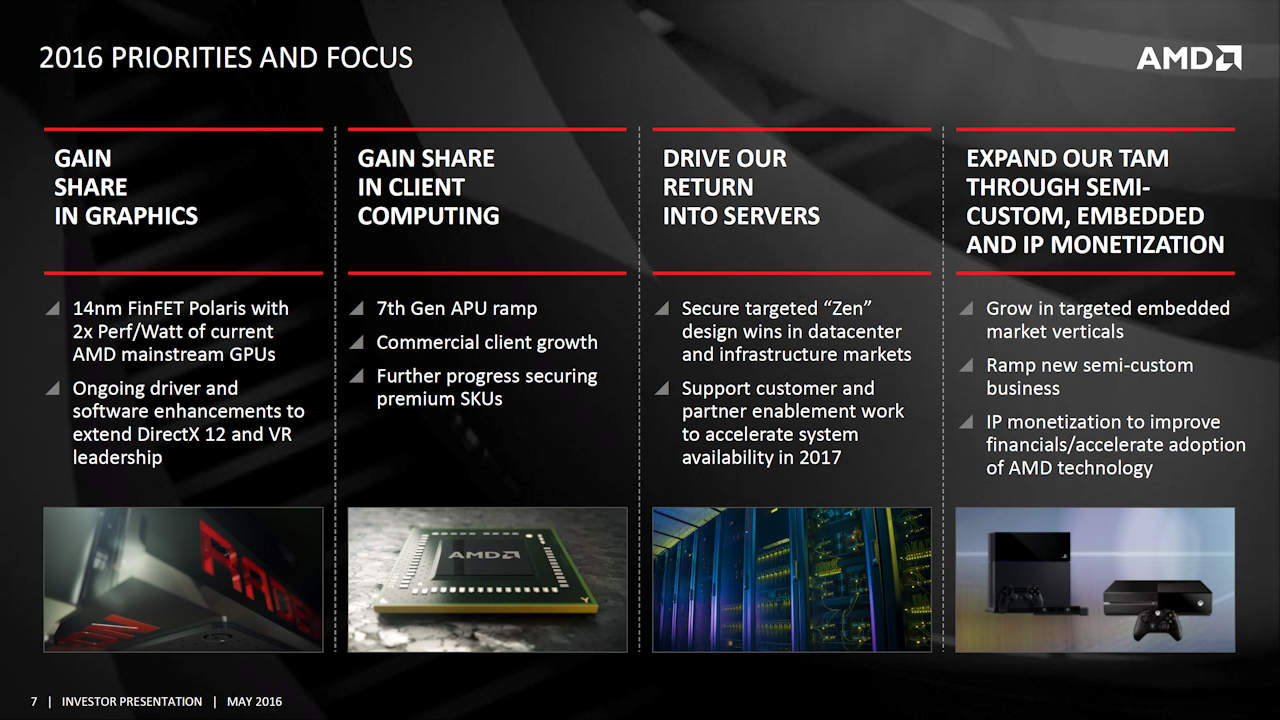 Recently, AMD marked a 3% gain in graphics market share, taking the company to almost 23%. There’s still a long way to go and here’s where ZEN and ZEN-derived products will help AMD to establish three of four pillars on Slide 7. The “7th Gen APU Ramp” consists out of “Summit Ridge” and “Raven Ridge” APUs, which hold the key to driving the margin up. AMD will continue to make dedicated, GPU-less processors i.e. CPU, going head to head against upcoming-yet-continuously-delayed Broadwell-E and Skylake. 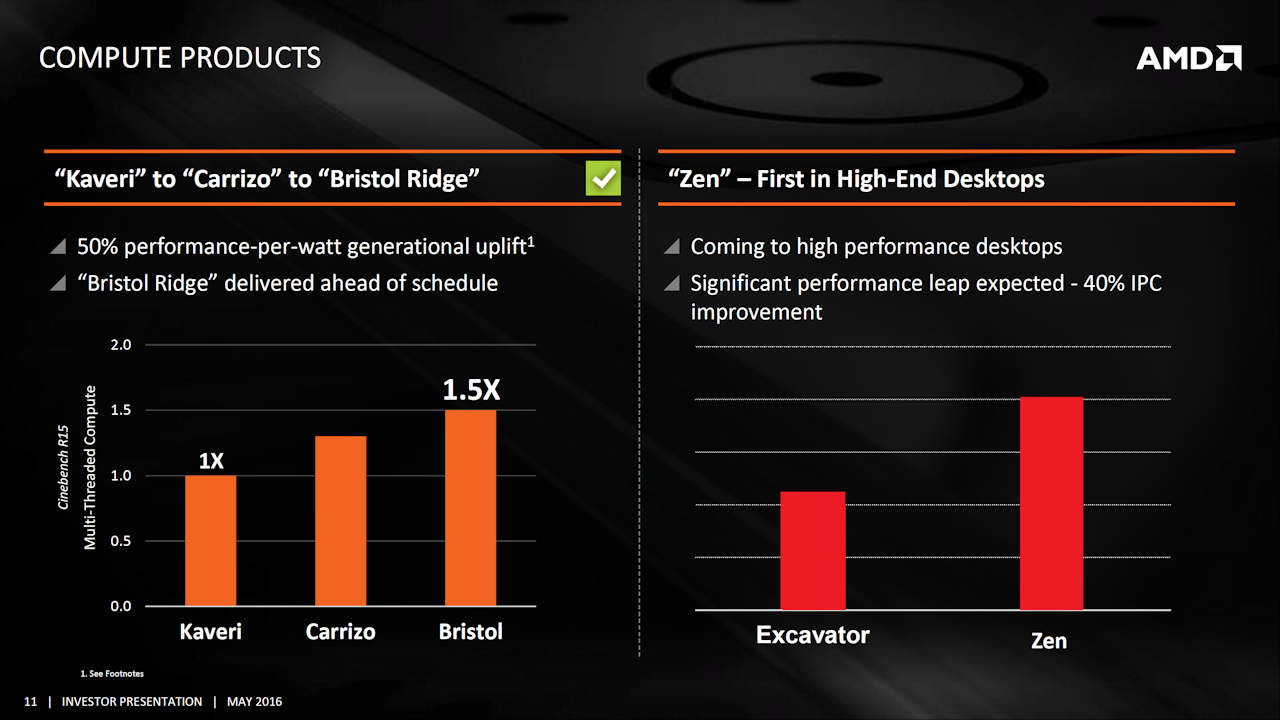 While AMD claims Bristol Ridge was delivered ‘ahead of schedule’, comments from Ruth Cotter and Mark Papermaster resonated negatively with several analysts, who criticized the given statement. Mark Hibben and Nikhil Gupta both criticized AMD on SeekingAlpha, but beware of their stock portfolio.

Still, if we forget troubled market delivery for previous-gen part, the future might look brighter due to all the shifts on the manufacturing side. In order to catch up with times, GlobalFoundries ’14XM’ or quasi-20nm process was licensed from Samsung Semiconductor – giving AMD (and other customers) space to breathe and deliver the products. AMD claims ZEN will deliver a 40% IPC improvement over the Excavator, which would put it in the range of 48-52% performance increase over Bulldozer. Bear in mind that Bulldozer and Phenom before came with an ill-fated low-throughput design, with dog-slow L2 and L3 cache memory performance. In some tests, L3 cache had as high latency as system memory (40ns range), which was ridiculously bad.

The return of Jim Keller on the CPU and Raja Koduri on the GPU side brought balance and the focus on low-latency, high bandwidth cache and memory subsystem could raise the IPC on their own. 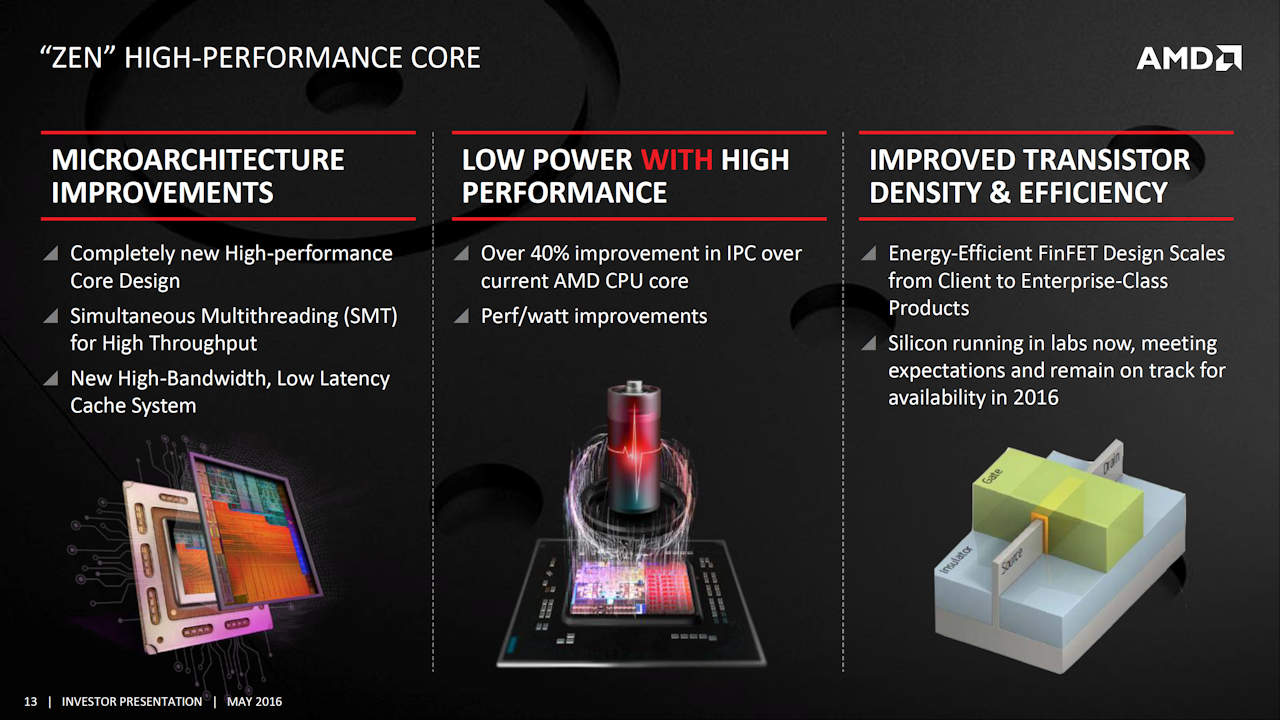 ZEN represents a hard-core reboot. Our sources quoted that the performance magnitude is very similar to when the K7 550 silicon came out, and pummeled Intel’s incumbent Pentium III by 30%, clock-per-clock – starting the second Megahertz wars. ZEN features Simultaneous Multithreading, which is the same approach Intel uses with their own HyperThreading, abandoning AMD’s Clustered Multithreading approach (Bulldozer / Piledriver / Excavator etc.). 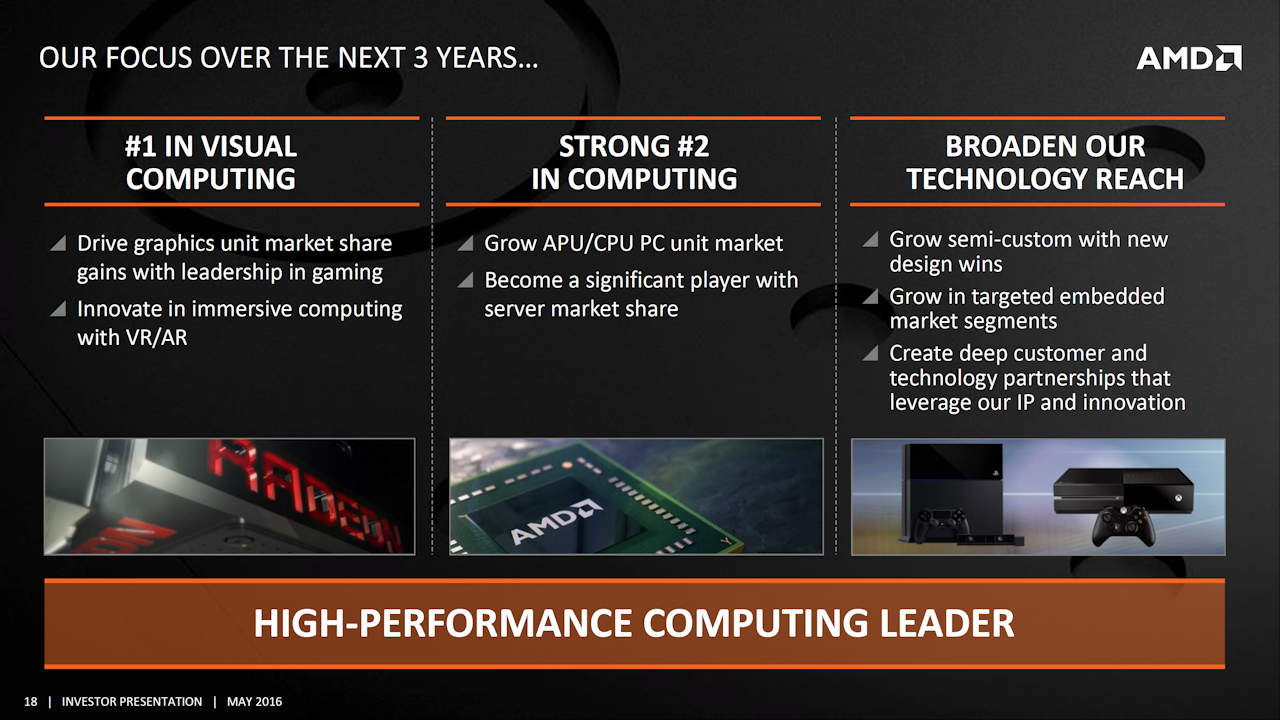 In the end, we are left with AMD’s goal of being the high-performance computing leader. If the company truly delivers the promise of Polaris, and more importantly Vega on the graphics side, and to see AMD delivering ZEN-based 8- and 16-core silicon in stand-alone and multi-chip form, the only way is up.