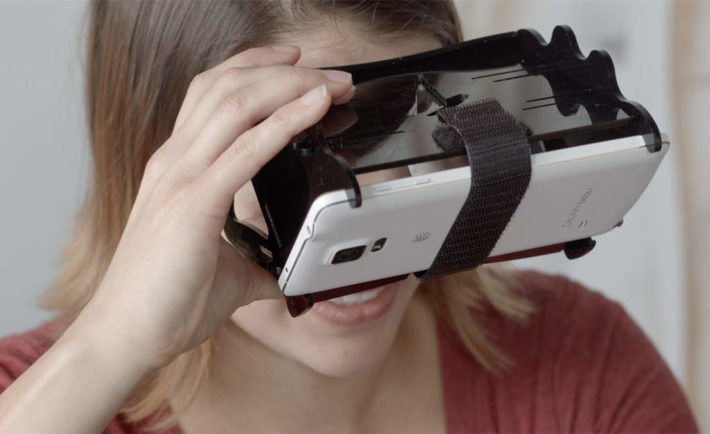 Augmented Reality, also called Mixed Reality (MR, MxR) is set to represent a very large part of our lives. Even today, if you own a car with a heads-up display (HUD), you are a user of Augmented Reality. Still, the development of AR applications is extremely difficult due to high barrier of entry. Unlike the VR, where you can purchase an Open Source VR Hacker 1.4 headset (OSVR) for just $299.99 –   AR headsets can set you back for thousands of dollars. Case in point is Microsoft’s HoloLens, where a development kit will set you back for $3000. Osterhaut Design Group sells their R-7 glasses for $2799.99.

Thus, AR manufacturers sell their development products by passing the cost onto the end user, while VR development is subsidized by all – Oculus shipped ‘devkits’ for $349.99, HTC Vive PRE program shipped over 10,000 units for free, OSVR is very cheap, and makers like Deepoon go for as low as $249.99.

It was no other than Google that delivered the first “million unit VR headset”. By launching Cardboard VR application and the headset made out of… cardboard, Google set the stage for massive adoption of VR among developers, and the company isn’t stopping anytime soon. Next iteration of Google Android OS will feature Daydream UI and we feel it might be the main feature of upcoming Android. Total sales of Cardboard VR exceed five million.

Yet, when it comes to AR, Google’s own Glass was setting people back for $1,500 – and yet, the lowest estimates were around 50,000 units, while clickbait publications like Business Insider claimed almost 900,000 units. The difference between $75 million and $1.34 billion probably means the truth was somewhere on the lower side, perhaps around 250,000 units.

Enter Seebright, a promising AR/VR startup that just launched what might be “Cardboard of AR”, For mere $39.99, you can purchase a fully fledged AR development kit supporting most popular AR frameworks of today. The concept is very simple – take a set of 10 laser-cut parts, assemble them in orderly fashion, strap your smartphone and you’re good to go. Seebright supports both Apple iOS and Google’s Android, with the Seebright SDK featuring an emulator that works on both platforms. Most importantly, the SDK comes with support for Unity Engine and Unreal Engine – you can build and test your own application almost immediately.

“We recognized the problem of very high barrier of entry for Augmented Reality. Instead of planning conservatively, and opting to go via crowdfunding route through platforms such as Kickstarter – we decided to gauge the interest of the market by launching the product immediately. AR adoption is extremely important for the future of entertainment and professional use, and we hope that Seebright Ripple will set off ‘ripples’ across the AR/VR ecosystem.” said Simon Solotko, Chief Marketing Officer for Seebright. “We want to make AR available to anyone that wants to play with it, and the only thing you need is something you keep in your pocket already – your smartphone. Apple or Google, it doesn’t matter as being platform agnostic is all that counts.”

See the instruction video for yourself:

But that’s not all. Seebright also announced Seebright Wave Innovator Edition, a complete head-mounted display (HMD) system that still utilizes your smartphone, but also comes with an array of sensors and what they hope to be ‘an industry leading visual quality with 52 degree field of view’.