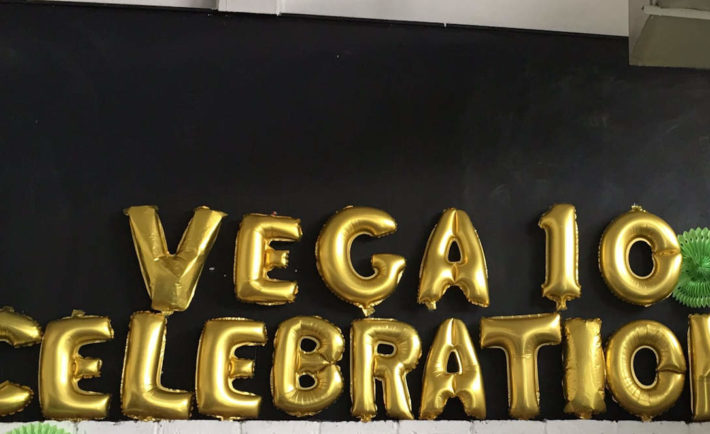 AMD’s decision to rename and split the Northern Islands family into two is starting to unravel itself. Polaris 10 (Ellesmere) and 11 (Baffin) are coming to market as low-power mainstream cards – Radeon RX460 (Polaris 11), RX470, RX480 4GB and RX480 8GB (all Polaris 1o).

On the other side, Greenland i.e. Vega 10 will be the most advanced silicon AMD has ever produced. Featuring 14nm FinFET design by GlobalFoundries or Samsung, with SK.Hynix HBM2 memory modules on multi-chip-module, i.e. MCM (TSMC calls this CoWoS), Vega 10 is looking to offer equal or higher performance than the high-end GP100. You should expect the chip to land in between GP104 and GP100. Managing all that was the product of AMD’s Shanghai GPU design team.

Good news is that as of today, AMD is celebrating the end of actual hardware design and shipping the designs into the hands of in-house and 3rd party developers. In several posts on Twitter, Raja Koduri, Senior Vice President and General Manager for Radeon Technologies Group at AMD published pictures from the “Vega 10 Celebration Party”.

Incredibly proud of our gpu design team here in shanghai that delivered polaris family and next Vega pic.twitter.com/ejvFJW1DoY

It’s never been a better time to be a gamer. According to official sources at AMD, we should not expect to see Vega 10 GPU before first quarter of 2017. That information is contradicted by other sources close to the company, which claim AMD is working night and day of making a simultaneous launch of ZEN-based high-end CPU and Vega 10 GPU, where AMD could achieve platform leadership for the first time since 2006.