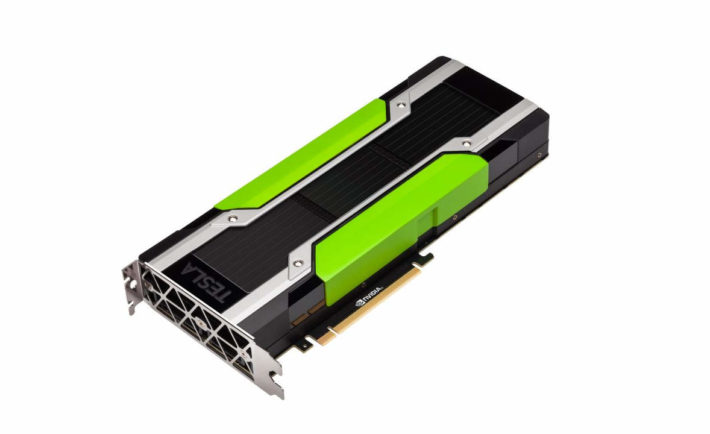 At the International Supercomputing Conference (ISC), which takes place this week in Frankfurt, Nvidia finally unveiled the PCIe version of its largest chip, the GP100. This is not the rumored GP102 chip and confirms words spoken by Jen-Hsun Huang, co-founder and CEO of Nvidia Corporation – when he said that the company ‘taped out all the Pascals’: GP100, GP104 and GP106.

The GP100-based Tesla P100 is a quite long dual-slot card, which rivals dual-GPU Tesla K80 in its length. The board features lower clock for both GPU and the HBM2 memory, meaning only the Nvidia NVLink-based daughterboards will feature GP100 chip in its full performance capacity. There will be two P100 boards, one with 16GB and one with 12GB of HBM2 memory. Both cards will feature identical number of chips, the reduction comes from yield-related decisions in order to maximize the number of usable packaged chips out of TSMC and partnering packaging facilities.

Feature-wise, all products are identical. GP100 physically carries 3840 CUDA cores. The number splits into two figures – 2880 FP32 Single-Precision and 960 FP64 Double-Precision cores. All products utilize GPU Boost to temporarily achieve peak performance. What Tesla P100 for PCIe-Based Servers does not carry are the display outputs. Still, we managed to see a prototype, a fully functional PCIe board which will come to market as Quadro P6000 and as GeForce GTX Titan (insert the random letter).

The prototype carries four display outputs, and there are no DVI connectors – all you get is DisplayPort 1.4 and HDMI 2.0b.  The display controllers are essentially the same as the ones used on GeForce GTX 1070 and GTX 1080 (GP104 chip). We expect to see Quadro P6000 16GB being launched at SIGGRAPH, which will take place between July 24-28, 2016 in Anaheim Convention Center, California. Furthermore, Quadro P4000 and P5000 8GB will probably be the professional versions of GeForce GTX 1070 and 1080, launching both for laptop and desktop workstations.

Quadro might have unlocked FP64 performance, but a GeForce-based part certainly will not – Nvidia will probably disable 900 or so FP64 units, keep the performance at 1/16, 1/32 or 1/64 rate, and use that power to clock the card probably to the level of GeForce GTX 1080, or even higher than that.

Arrival of Pascal-based GeForce GTX Titan card is not known yet, but we expect to see the card showing up for Holiday Season 2016. Maybe, but just maybe – we might see a potential introduction as early as PAX West 2016 in September. Given that GTX Titan is expected to go against AMD’s Vega 10 – we might have to wait a long time for this one. Be that as it may, GP100 will be Nvidia’s chip that will go through the whole line-up, appearing in more products than ever before (we count six).