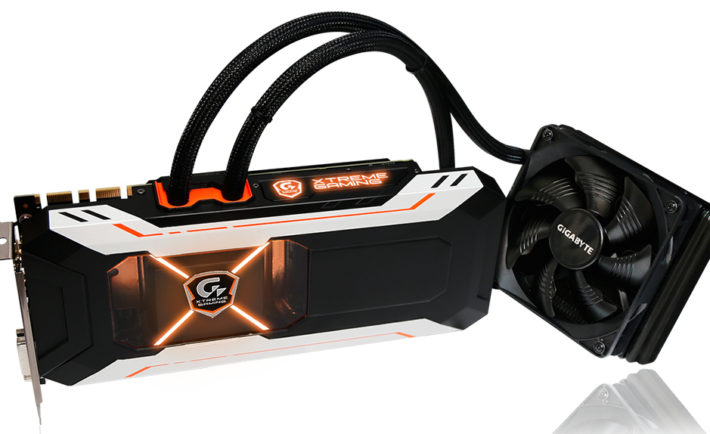 The extremely short product name “Gigabyte GeForce GTX 1080 Xtreme Gaming Water Cooling” might sound like a regular GTX 1080 slapped with a water block however that’s not the case. The latest card from Gigabyte is a GTX 1080 pumped up to the max with a monstrous PCB (Printed Circuit Board), fitted with top of the line components. The PCB features Titan-X industrial grade chokes and capacitors, dust resistant, moisture resistant and corrosion resistant PCB coating and a 12+2 phase VRM that uses Ultra Durable class components for extreme durability and overclocks. If you recall, for Titan-X with Pascal GPU, Nvidia utilized the same components as on Quadro and Tesla graphics cards, intended to last for five years of continuous operation. Now Gigabyte is bringing that level of quality into a consumer product.

The Gigabyte GTX 1080 Xtreme Gaming Water cooling packs the full GP104 GPU core – 2560 CUDA cores are clocked at 1936 MHz (boost clock), using the factory shipped overclock mode. The card also comes with 8 GB of GDDR5X memory which is clocked at 10416 MHz. This leads to a total bandwidth of 333.4 GB/s, compared to 320 GB/s on the reference models.

Moving to the design, the card has a big heatsink shroud that extends the length of the PCB. The aluminum shroud houses the All-In-One (AIO) liquid-block which leads to a 120mm radiator block. The new design scheme of Gigabyte Xtreme gaming cards looks excellent with orange LEDs on the front and side of the shrouds. A clear cut windows will be displaying the GPU block which leads to great aesthetics. 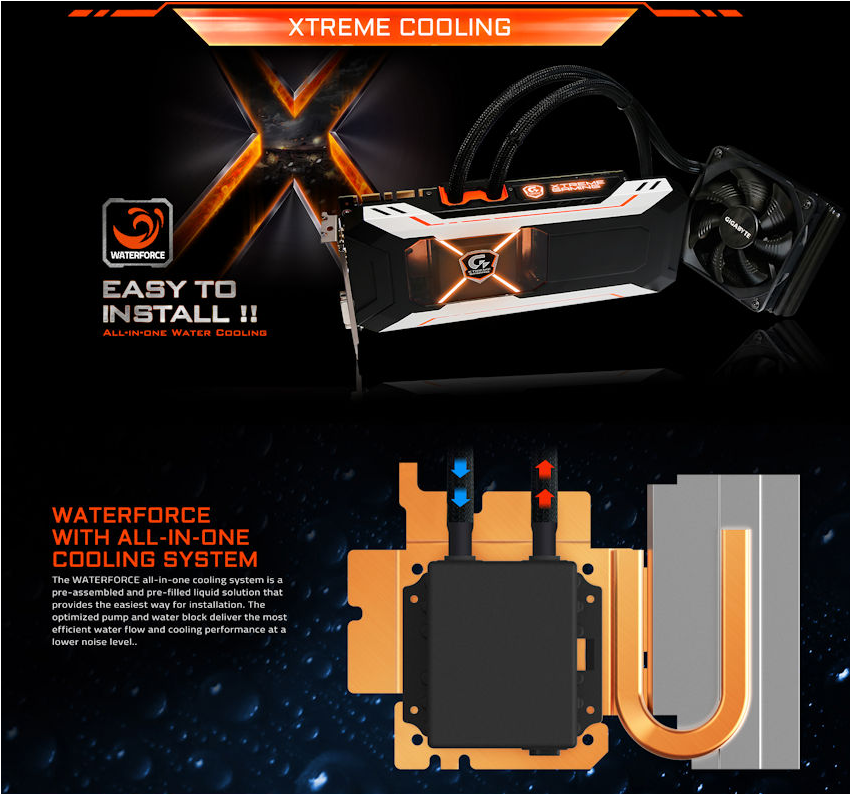 Gigabyte has deployed their “waterforce channel system,” using a full length block to channel air along the GPU, VRAM and MOSFETs. This approach leads to significantly better temperatures than reference or overclocked air cooled cards. The radiator is a 120mm black aluminum design which dissipates heat effectively and channels water to the GPU block using braided FEP tubes that offer high thermal stability and high pressure tolerance. The card also comes with a metal backplate that adds to the looks of the card. 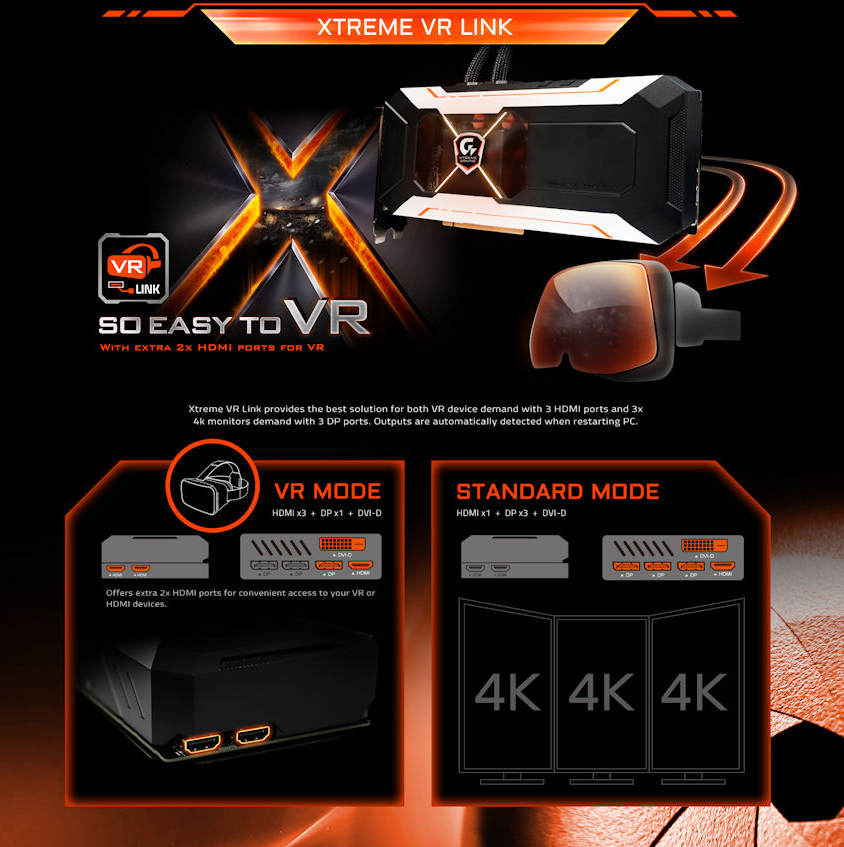 The back of the card comes with a single HDMI port, no less than three DisplayPort and a single DVI-D output. However, this card also have a VR mode. The front of the card is equipped with two extra HDMI ports (just around the corner from 2x 8pin GPU power connectors). In this mode you can also use 1x DP, 1x DVI-D and 1x HDMI that can be found on the back of your card. This reminds us of EVGA’s own GeForce GTX 980 Ti “VR Ready” card, which never received its follow-up. Judging by the level of detail Gigabyte put in creating this product, we would not be surprised if this card remains the “king of the VR hill”. Sadly, Gigabyte did not bundle the front 5.25″ plate, which means your headset cables will have to go through a removed 5.25″ bracket. A bit of a hack, unless you get a case that features HDMI ports alongside the USB ports.