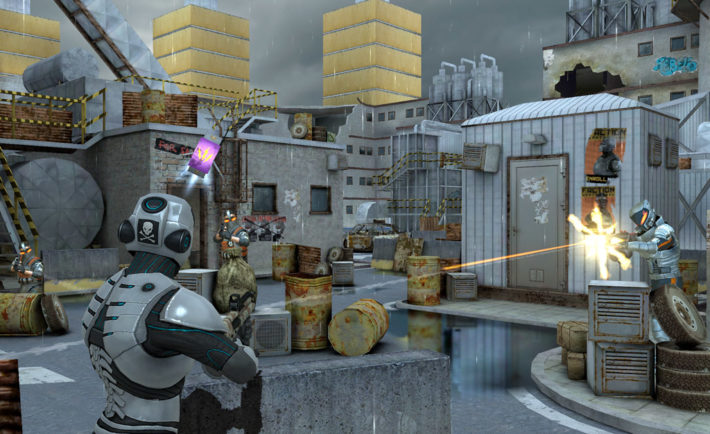 Game Troopers need no introduction – this publisher of simple or mobile games just announced its entrance into the field of mobile VR games. The publisher teamed again with Craneballs, their development team to deliver their first VR title. Craneballs is known for Overkill 3, an action game that can be played as third person shooter on PC, and Android or… as a First Person Shooter in Virtual Reality environment.

Overkill 3 was originally made as a TPS, but Game Troopers decided to fund the re-make into a VR title. The game features some cool features like crouch and stand combat, and quite awesome mechanics for taking cover. We downloaded the conventional build, not the VR one – and gave a quick spin. Weapon tracing is as realistic as mobile platforms can allow, as paired with ‘adjusted aiming’. Graphics are average, as the game reminds us of Call of Duty: Modern Warfare, hopefully the developers can improve. The only thing that really bothers me is that they really need to improve bullet travel time. In few moments you can see lag alike moments where bullets don’t hit target right after shooting.

For VR version, developers decided to use HTC Vive, or to be more precise – SteamVR and Viveport distribution platforms. It really shows how gun and hand controls can be well implemented into the game with two controllers. The game is made in a way where your avatar moves from section to section, takes cover and eliminate enemies… you can bet this will be game that could make you sweat. This game is typical shooter, the environment looks rusty and futuristic at the same time, and the gameplay is a pure shoot to kill with no side missions. In a way, it would be a whole lot more fun for us to see, for example a side mission featuring sniper kills or something that will wow you from time to time.

Overall, I believe this is a good game to casually enjoy, and in the same time do some exercise. If this game had a bit better graphics, and some side missions alongside classical shooter it would probably attract more people, but from what we can see you will like it if you like shooter games. It’s obvious that the PC version will share its mobile / console legacy, meaning the hardware won’t be utilized to the fullest.